Here's Everything to Know About the 2020 Award Show Season

The 2020 award show season is officially here. The months of accolades kicked off in earnest with the Golden Globes on Sunday, Jan. 5, with Once Upon a Time in Hollywood, 1917 and Joker each having big nights. Awkwafina made history with her win for The Farewell, becoming the first woman of Asian descent to receive an acting award in the musical/comedy category. Succession and Fleabag dominated the night’s TV awards. At the Grammy Awards on Jan. 26, Billie Eilish made history as the first woman to win all four top categories of the night.

The 92nd Academy Award nominations, announced Jan. 13, had their own fair share of twists. Joker led the Oscar nominations with 11 nods, and several of the year’s most highly-acclaimed films, including Marriage Story, The Irishman and Once Upon a Time in Hollywood, continued to snag multiple nominations. Many were disappointed at the lack of a nomination for Jennifer Lopez’s Hustlers performance. The Academy also faced criticism for its failure to recognize any women directors, in particular Greta Gerwig (Little Women), and for nominating just one person of color, Harriet‘s Cynthia Erivo, among a total of 20 acting nominees.

But before the Oscars close out the season on Feb. 9, there’s also the BAFTAs, the SAG Awards and the Grammys.

Here’s everything you need to know about all the 2020 awards shows.

The awards season culminates with the 92nd Annual Academy Awards on Sunday, Feb. 9, airing live on ABC at 6:30 p.m. E.T.

The Academy of Motion Picture Arts and Sciences, made up of film industry professionals, votes on the nominees and winners for the Oscars.

The Academy of Motion Picture Arts and Sciences, made up of film industry professionals, votes on the nominees and winners for the Oscars. Nominees were announced by Issa Rae and John Cho on Jan. 13. In addition to Joker‘s leading streak, The Irishman, 1917 and Once Upon a Time in Hollywood earned 10 each. The Best Picture nominees are made up of those four, plus Ford v. Ferrari, Jojo Rabbit, Marriage Story, Parasite and Little Women.

The Academy announced in a tweet on Jan. 8 that there will be no host of the ceremony this year.Last year’s initially announced host, Kevin Hart, was taken off the docket after offensive comments resurfaced online. Critics marveled at just how smooth and enjoyable the host-less broadcast was—TIME TV critic Judy Berman wrote that “the lack of an emcee made every interaction less awkward.”

And it seems the network felt similarly. ABC entertainment executive Karey Burke told The Wrap in May that the production had done better in ratings. (The previous year had seen an all-time low in viewership.) “We’re extremely proud of how the show turned out creatively and how well it performed this year, so I think you will see us not messing with that formula to the best of our abilities,” she said.

British actress Olivia Colman poses with the award for a Leading Actress for her work on the film 'The Favourite' at the BAFTA British Academy Film Awards at the Royal Albert Hall in London on Feb. 10, 2019.
Ben Stansall—AFP/Getty Images

Just two days after the Golden Globes, the 73rd British Academy Film Awards nominees were announced on Jan. 7. More commonly known as the British Academy of Film and Television Arts Awards, or BAFTA Awards, the ceremony will be hosted by comedian and talk show host Graham Norton on Feb. 2. It will broadcast live on the BBC from London’s Royal Albert Hall.

Hosted by BAFTA, the British film organization, the awards honor the year’s movies, but industry voters tend to favor British-made projects. Last year’s biggest winner was Yorgos Lanthimos’ The Favourite, a British-Irish-American production, which won seven of its 12 BAFTA nominations.

Despite this, Joker, an American film, earned the most BAFTA nominations this year, with The Irishman and Once Upon a Time in Hollywood close behind. The ceremony has been met with backlash for nominating all-white actors in the acting categories — 20 people in total — overlooking Cynthia Erivo of Harriet, Lopez, Eddie Murphy for Dolemite Is My Name, Awkwafina, Antonio Banderas (Pain & Glory) and Lupita Nyong’o (Us).

There are 23 film awards given out at the BAFTAs. The organization hosts a separate ceremony in the spring to honor TV shows.

Lizzo performs onstage during 102.7 KIIS FM's Jingle Ball 2019 Presented by Capital One at the Forum on Dec. 6, 2019 in Los Angeles, California.
Rich Fury—Getty Images for iHeartMedia

Alicia Keys hosted the ceremony for the second year in a row when it aired live on CBS from the Staples Center in Los Angeles. Winners were decided by the Recording Academy, a group of music industry professionals.

One of the biggest snubs of the year was Taylor Swift, whose album Lover earned only three nods, with just one in a major category, and didn’t ultimately win any of them. Worldwide phenomenon BTS also earned no nominations, though its album Map of the Soul: Persona is now South Korea’s best-selling album of all time. But Lil Nas X did invite the group to join him on-stage during a performance of “Old Town Road” during the broadcast.

Megan Thee Stallion‘s absence from the nominations was also surprising, considering she was the creator of 2019’s defining meme, “Hot Girl Summer.” TIME’s Cady Lang wrote that the women of hip-hop were largely forgotten by the Academy this year. “Although this year’s Grammy nominees included more female artists than in the past, they weren’t to be found in the hip-hop categories,” Lang wrote.

In 2018, the Recording Academy formed a Task Force on Diversity and Inclusion following criticism of the lack of female nominees and winners at the awards ceremony. Deborah Dugan, who earlier this year was named president and CEO of the Academy, has committed to inviting 2,500 additional female voting members to the group by 2025. But there seems to be trouble afoot at the Academy heading into the ceremony: less than two weeks before the Grammys, Dugan was ousted from her post, with various reports on both sides throwing blame.

The 77th Annual Golden Globes took place on Sunday, Jan. 5, at the Beverly Hilton Hotel in Los Angeles. The first big ceremony of the season, the program was hosted by comedian and actor Ricky Gervais for a record fifth time.

The Hollywood Foreign Press Association (HFPA), a non-profit made up of international journalists covering the entertainment industry, runs and votes on the Globes—making it a much different, and smaller, crowd than the voters for the peer-recognized Academy Awards and Emmy Awards.

Read more: See All the Winners of the 2020 Golden Globe Awards

Still, as the first to award major winners, the Globes offered a glimpse into what may prevail heading into the Academy Awards. Many were disappointed that in a year with such well-reviewed women-directed movies as Hustlers, Booksmart, Little Women, Harriet, A Beautiful Day in the Neighborhood and The Farewell, all five nominees for Best Director and Best Screenplay of a Motion Picture were male. (Each of those films earned nods in other categories, just not for directing or writing.)

On the other hand, many were satisfied to see the recognition of Bong Joon-ho’s South Korean thriller Parasite, which earned nominations for directing and screenplay, though it won neither, and won the Globe for foreign language film. Following in the footsteps of last year’s Spanish-language film Roma, non-English-language movies are having a moment of greater appreciation among mainstream awards-voting bodies.

The nominees for TV also had their share of surprises and disappointments. When They See Us, Ava DuVernay’s acclaimed Netflix miniseries about the exonerated Central Park Five, was surprisingly absent from the list. (The series earned 16 nominations and two wins at this year’s Emmys.)

Read more: The Biggest Snubs and Surprises of the 2020 Golden Globes Nominations

Apple TV+ seems to have made a successful awards season entree with The Morning Show‘s three nods (none of which it took home), but another streamer came out victorious. Overall, Netflix original content dominated the Globes nominees this year, with 34 nominations across TV and film. Noah Baumbach’s Marriage Story and Martin Scorsese’s The Irishman, both distributed by the streamer, earned the most film nominations. Despite those movies’ many nominations, The Irishman came home empty-handed and Marriage Story took home just one Globe, for Laura Dern’s supporting performance.

In addition to his nomination for portraying Mister Rogers in A Beautiful Day in the Neighborhood, Tom Hanks was honored with the Cecil B. deMille Award for “outstanding contributions to the world of entertainment.” Jeff Bridges earned the honor at the 2019 ceremony. Ellen DeGeneres received the second annual Carol Burnett Award, celebrating her for her part in the “new Golden Age” of TV, and was introduced with a moving speech by Kate McKinnon.

The cast of 'This Is Us,' winners of the Outstanding Performance by an Ensemble in a Drama Series, pose in the press room during the 25th Annual Screen Actors Guild Awards at The Shrine Auditorium on January 27, 2019 in Los Angeles, California.
Dan MacMedan—Getty Images

The Screen Actors Guild (SAG) honored the best of film and TV acting at its 26th annual ceremony on Jan. 19.

SAG-AFTRA is a labor union of “the faces and voices that entertain and inform America and the world,” the organization says. Two smaller groups chosen from the film industry and TV industry nominate films, shows and actors for the SAG Awards, and all members then vote on the winners.

The big surprise of the night was Parasite‘s win for Outstanding Performance by a Cast in a Motion Picture, giving it a leg up in the Oscar Best Picture race. Winners on the movie acting side are all considered favorites for the Academy Awards: in leading roles, Renee Zellweger (Judy) and Joaquin Phoenix (Joker) and in supporting roles, Laura Dern (Marriage Story) and Brad Pitt (Once Upon a Time…in Hollywood).

Going into the evening, Once Upon a Time in Hollywood, The Irishman and Bombshell tied for the most nominations, with four nods each. On the TV side, Game of Thrones was honored with three nods, while HBO’s acclaimed, Emmy-winning and Golden Globe-nominated Succession earned no nominations. (The HFPA gave Game of Thrones only one Globes nomination.) 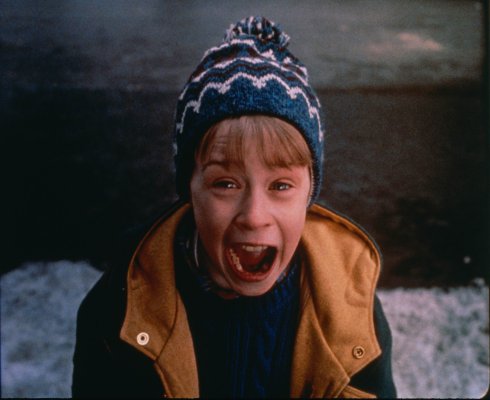 'Tis the Season for Two of Your Home Alone Faves to Get Golden Globes Nominations
Next Up: Editor's Pick