It was a big night for music’s most avid fanbase, as K-pop superstars BTS took to the Grammy stage on Sunday night to perform alongside rapper Lil Nas X. BTS’ performance made history: it was the first time a Korean group performed at the American awards show.

RM, J-Hope, Suga, Jung Kook, Jimin, Jin and V showed up in the second part of the record-breaking rapper’s rendition of “Old Town Road” to provide some extra vocals and dance alongside Lil Nas X. RM, Suga and J-Hope — the rappers of the group — in particular got to be in the spotlight for what they coined “Seoul Town Road.” (They were followed by star cameos from Diplo, Mason Ramsey and Billy Ray Cyrus, before joining all together to finish off “Old Town Road.”) Their appearance was short but sweet — and compared to their usual sharply-choreographed, high-energy performances, showed off a more casual side to the supergroup.

In 2019, BTS made their first Grammys appearance as presenters at the show. This year, they’re ramping up for the release of their next album, Map of the Soul: 7 in February, after putting out the first single from the album “Black Swan” earlier in January. 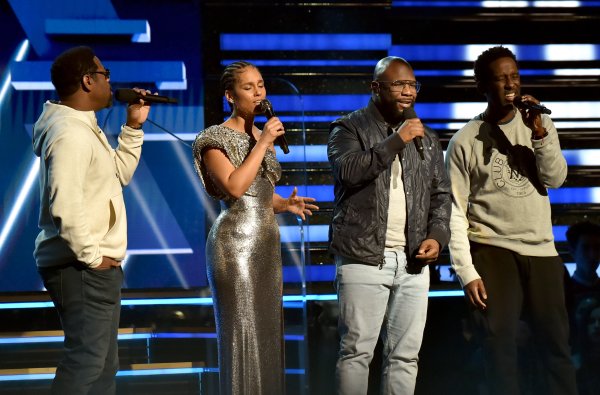 Here's How Grammy Performers Paid Tribute to Kobe Bryant
Next Up: Editor's Pick