Apple TV+ Flagship The Morning Show Is Binge-Worthy But Frustrating

On Nov. 29, 2017, Savannah Guthrie and Hoda Kotb greeted Today viewers with the news that NBC had fired their co-host Matt Lauer amid reports of sexual misconduct. “We are heartbroken,” said Guthrie, in a speech that expressed sympathy for Lauer’s alleged victims as well as sorrow over the loss of a colleague. Both women appeared to be fighting tears.

It was an arresting moment, one that felt raw and brave enough to cut through the daily onslaught of #MeToo revelations in the fall of 2017. But, as genuine as Guthrie and Kotb might’ve been, the announcement also functioned as a savvy attempt to reinstill trust in a news organization that had apparently failed to protect its staff from chilling abuses of power. That uncomfortable mix of real emotion and calculated crisis PR is a subject of fascination for The Morning Show, which enlists Jennifer Aniston, Reese Witherspoon and Steve Carell in the flagship offering from Apple TV+.

The most polished of a handful of series debuting with the Nov. 1 launch of Apple’s streaming service, the drama follows the cutthroat cast and crew of a Today-like show. The project, based on media reporter Brian Stelter’s 2013 nonfiction book Top of the Morning, was greenlighted before the Lauer bombshell dropped. But its creative team (which includes executive producers Aniston and Witherspoon) made drastic changes in response to #MeToo, hiring a female showrunner, Friday Night Lights vet Kerry Ehrin, and shifting the story’s focus to a sexual-misconduct scandal involving a male anchor (Carell’s Mitch Kessler). In the premiere, Aniston, who plays Mitch’s longtime co-host Alex Levy, gives a monologue clearly inspired by Guthrie’s. What Alex’s viewers don’t know is that her performance is, in large part, a woman’s desperate ploy to save her job—and that her feelings about Mitch are actually quite complicated.

As she jockeys for an advantage in contract negotiations with suits who see her as an over-the-hill ice queen, a new face appears at the office: local-news reporter Bradley Jackson (Witherspoon, in an impressive 180-degree pivot from her officious Big Little Lies character), a smart, blunt libertarian with a quick temper and a working-class mom and brother who rely on her support. Bradley’s politics and personality have cost her plenty of jobs—making her both an unlikely Morning Show hire and an ideal foil for Alex, whose poised veneer conceals years of simmering rage.

You can see why Apple is leading with The Morning Show: it’s a sophisticated drama with A-list stars that capitalizes on hot topics and hot gossip. It goes all-in on prestige-TV signifiers, investing in a dream supporting cast (Mark Duplass, Gugu Mbatha-Raw, Billy Crudup, Néstor Carbonell, Bel Powley) and music from Oscar nominee Carter Burwell. If it takes a while to get a feel for most characters, Alex and Bradley come off as logical extensions of Aniston’s girls’-girl relatability and Witherspoon’s intensity.

Yet the show doesn’t have the same depth or experimental spirit as the top tier of TV in 2019. Rather, it resembles a more muted Shonda Rhimes serial or a less smug Aaron Sorkin joint—it’s pithy and easy to watch but rarely as thought-provoking as you’d hope, given the topic. Mitch’s murky, sub-Lauer sins and Carell’s operatic tears hint at moral ambiguity without confronting it, and Ehrin adds little (in the three episodes sent to critics) to the #MeToo discourse. The Morning Show could make a great core program for Apple TV+, if only its scripts had the courage of its lead characters. 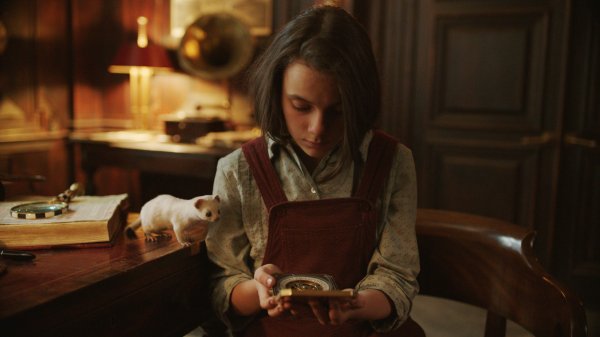 HBO's Lavish His Dark Materials Adaptation Is Strictly for Fantasy Fans
Next Up: Editor's Pick