Some mornings you may wake up and think, The last thing I’m in the mood for are more stories about men doing manly things. And you may feel that way the morning of the day you see The Irishman—but don’t be surprised if you feel differently by day’s end.

You may also feel you already know a lot, perhaps too much, about Martin Scorsese’s 25th narrative feature and how it was made: It’s adapted from Charles Brandt’s 2003 true-crime potboiler about a Teamster official and lower-tier mafia figure, Frank Sheeran, who claims he killed Jimmy Hoffa, the onetime Teamster president who went missing in 1975 and was finally declared dead in 1982, though his body was never found. The Irishman unites three actors who have sometimes worked together in various permutations, though all three have never appeared in the same movie. And it took a long time, and a great deal of money, to complete because all three of those actors—Robert De Niro, Al Pacino and Joe Pesci—play characters whose arc spans the 1950s to the early 2000s; their faces, appropriately weathered in real life, required extensive digital de-aging.

But you can’t know all there is to know about The Irishman until you’ve seen it. (The film, produced by Netflix, is the opening film of the New York Film Festival, and can be seen in limited theaters—recommended!—beginning Nov. 1, before hitting the streaming platform Nov. 27.) For the first two and a half hours of its three-and-a-half-hour runtime, The Irishman is clever and entertaining, to the point where you may think that’s all it’s going to be. But its last half-hour is deeply moving in a way that creeps up on you, and it’s then that you see what Scorsese was working toward all along: A mini-history of late-20th century America as filtered through the eyes of a smalltime guy who needs and wants to believe in his own importance and capacity for decency—and who can’t see, though Scorsese can, that it’s the end of a life that tells the truth about the middle.

The Irishman opens in the early 2000s, as an aged Frank begins recounting, from his nursing-home wheelchair, either the truth as it happened or a series of tall tales. He flashes back to 1975, and then further back, to the mid-1950s, when, as a delivery-truck driver, he meets a guy who will shape the course of his life: Russell Bufalino (Pesci) is the boss of a Northeastern Pennsylvania crime family, one that’s small but mighty. With his creased brow and perpetual scowl, he could be a tortured gremlin out of Dante’s Inferno. Russell will eventually take Frank under his wing, finding work for him that generally consists of rubbing guys out. Sheeran accepts these jobs with equanimity: At one point, he observes a selection of firearms laid out on a bed and explains in voiceover which types are best for which job. For him, guns aren’t totems; they’re disposable tools, and after one has served its purpose, it’s tossed into this or that body of water, where it settles to the bottom like a useless old boot, often joining hundreds of others like it.

In the course of his work Frank meets dozens—sometimes it seems like hundreds—of colorful, crooked people, and Scorsese and screenwriter Steven Zaillian (along with their other partners in crime, cinematographer Rodrigo Prieto and editor Thelma Schoonmaker) delight in introducing them to us, often explaining, with flashcard-style subtitles, how they’ll eventually meet their demise. (Because these guys are based on real-life crime figures, most of them end up being shot in the head, victims of blunt mob hits.) Harvey Keitel shows up in a small role as Angelo Bruno, the head of a Philadelphia crime family who often consorts with Russell, though with his raspy, whispery charm, he’s far more appealing. And eventually, Frank will meet Hoffa (Pacino), by turns garrulous and inscrutable, a leader of men who doesn’t always walk the straight and narrow.

Sheeran becomes Hoffa’s unofficial sometime bodyguard and close friend. And although Hoffa makes it clear, repeatedly, that he doesn’t like or trust anyone in the mob, they’re a necessary cog of the business he’s in. At one point, just after he’s completed a five-year prison sentence for fraud, he calls a meeting in a Miami restaurant with upstart New Jersey Teamster leader and mob guy Anthony Provenzano (Stephen Graham). Provenzano angers Hoffa by showing up late. He’s also dressed in a casual shirt and shorts, while Hoffa, as always, is turned out in a suit. Later, Pacino-as-Hoffa will bellow loudly and repeatedly, to anyone who will listen, about Provenzano’s fashion faux pas: “Who wears shorts to a meetin’?”

Who indeed? The Irishman is so layered with detail, and shifts so gracefully through so many eras, that it’s hard to tease out a clearly defined plot. Even so, the movie is beautifully constructed—you willingly follow wherever it goes. The de-aging is distracting at first: The actors’ eyes look real, but their skin is just a tad rubbery and flat—now and then I had to stave off a PTSD flashback to Robert Zemeckis’ Polar Express.

But the special effects are hardly a deal breaker, and in the end they probably add to the movie’s mythological vibe: The veracity of the real Sheeran’s confession matters less than the fact that De Niro’s version of Sheeran absolutely, without a doubt, pulled the trigger. De Niro gives his best performance in years, with zero mugging or scowling—his Frank is a man of action who’s so busy doing bad stuff, he barely has time to think. The final 30 minutes of the movie show what happens when he does—and even then, whatever reckoning he does is happening deep behind his eyes, and his gaze holds us.

Pesci, too, is terrific, particularly in a thread involving one of Frank’s daughters, Peggy (played as a youngster by Lucy Gallina and as a grownup by Anna Paquin—both are superb). With no kids of his own, Russell longs to earn her affection, but when she looks at him, her face registers nothing but mistrust and revulsion. Pesci’s Russell shows sliver-like flashes of vulnerability, before reverting to his normal state of devil-may-care bullying. His life has no meaning unless he’s in control.

Together, Pesci and De Niro featured, of course, in another Scorsese mob movie, the 1990 Goodfellas, and this movie does bear some slight similarities to that one: In places it has the same freewheeling jauntiness—but not nearly as much macho swagger. The Irishman is, among other things, a movie about betrayal and regret and loss, and it’s moving in a way Goodfellas is not. An old man couldn’t have made that movie, just as a younger one couldn’t have made this one.

And in that spirit, it’s safe to say that a younger Pacino wouldn’t necessarily have made a better Hoffa than the digitally de-aged one. He’s fabulous here, hitting the sweet spot between great and hambone. (Come to think of it, that’s always Pacino at his best.) As Hoffa, he struts and sputters and radiates unexpected warmth. He loves ice cream, and when he gets a sundae in front of him, he stabs into it with his spoon as if it had arrived live on the plate—but boy, he loves every bite. In one of the movie’s most joyous scenes, Hoffa’s son Chuckie (played by Jessie Plemons) foils a possible assassination attempt, which happens, of all places, in a courtroom as Hoffa is standing trial: A man leaps at him, wielding a gun that turns out to be unloaded, and Chuckie knocks him down. With great relish, pushing at the air around him as if he were doing the hokey-pokey at a wedding, Hoffa explains to the whole room what just happened—even though everyone has just seen it—and outlines a key philosophy of self-defense: “You charge, with a gun. With a knife, you run.” Later in the film, he offers another scrap of priceless advice: “Never put a fish in your car.” Both in and out of context, it’s a great line, a catchphrase for all occasions. It could be the new “Say hello to my little friend”—especially among those of us who are now older and, hopefully, wiser. 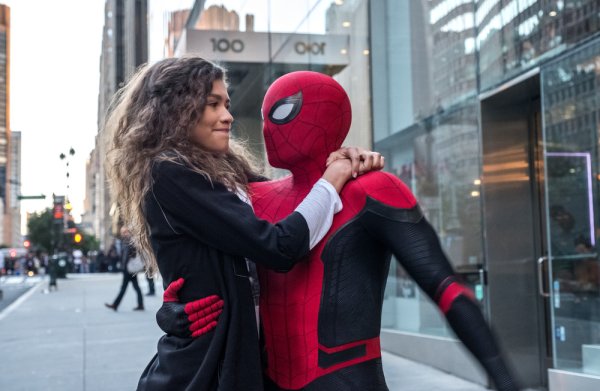 Why the Marvel Cinematic Universe Needed to Keep Spider-Man So Badly
Next Up: Editor's Pick