Do the Women of Big Little Lies Have a Case? We Asked the Experts About the Season 2 Finale

The final episode of season 2 of Big Little Lies aired Sunday with a lot of questions left to answer. But the biggest one viewers expected the hit HBO show to address was this: Will the titular “big little lie” blow up the lives of Madeline (Reese Witherspoon), Celeste (Nicole Kidman), Bonnie (Zoe Kravitz), Jane (Shailene Woodley) and Renata (Laura Dern)? Or would their questionable actions fade into the background as the notorious Monterey Five figure out how to finally move on?

We know that leading up to this season, Detective Quinlan (Merrin Dungey) of the local police department hadn’t given up on her suspicions about the five women and their involvement in Perry Wright’s (Alexander Skarsgård) death at the bottom of a staircase. In fact, she’s continued to call in their friends and acquaintances for questioning. But in real life, would the police have a case against the women? Does the fact that they lied about exactly how Perry died (slipped and fell versus pushed) also have an impact on their potential fates in the eyes of the law?

For answers, TIME turned to Dov Fox, a criminal law professor at the University of San Diego and author of the recently-released Birth Rights and Wrongs: How Medicine and Technology are Remaking Reproduction and the Law, as well as Sanford Horowitz, a criminal defense attorney in Santa Barbara County, and Los Angeles attorney Melissa Dagodag.

Would Bonnie be found guilty?

According to Fox, California law stipulates that circumstances exist in which taking a life to defend not only yourself but also someone else in danger can be justified. It’s called the “defense of others,” and if argued successfully, would clear up Bonnie’s case. “To succeed,” Fox explains to TIME, “Bonnie would have to prove three things: that (1) she had a reasonable belief that (2) the amount of force she used was necessary to protect the other person from (3) imminent threat of serious injury.”

In Fox’s view, the facts are in favor of Bonnie. He thinks it’s perfectly reasonable for her “to have believed that she needed to run up and shove a large man like Perry with two hands in order to stop him from severely beating and kicking the smaller Celeste… in light of the other three women’s apparent inability to slow the ongoing assault.” The fact that Perry fell to his death is admittedly “tragic,” Fox allows. “But it doesn’t make Bonnie’s pushing him a violent felony.”

Horowitz has a slightly more cautious take. He suggests the defense of others argument could fail if a jury found that the force used to defend Celeste was excessive, which would be considered “imperfect self-defense.” It does help that there’s no evidence Bonnie ever had “specific intent to kill” before she pushed Perry, making the more serious murder charge unlikely to begin with. With manslaughter, Bonnie could also claim “diminished mental capacity” and PTSD due to her own abusive relationship with her mother during childhood, Horowitz says — she tells her unconscious mother that she envisioned that she was pushing her, not Perry — and argue down the charges.

Would the rest of the Monterey 5 be found guilty?

The other members of the Monterey Five are in a slightly different situation from Bonnie. “Technically, the other female characters present at the scene who later lied for Bonnie might be liable for aiding and abetting the involuntary manslaughter as accomplices,” Dagodag explains. There are questions about obstruction of justice, too, which — if one is found guilty — can carry a sentence of up to five years in prison along with fines, or probation and community service.

Further, their lie itself becomes a problem, as it is a crime to “conceal, or attempt to conceal, evidence of accidental death,” which is exactly what Madeline, Jane, Celeste, Bonnie and Renata have been doing; convictions on that count can carry up to a year in a county jail under the California penal code. Madeline in particular has the potential to be charged with “dissuading a witness,” Horowitz notes. Dagodag agrees that Bonnie, however, could use the “defense of others” defense in this case.

But are circumstances any different for Celeste?

Like the other women, Celeste’s actions could qualify her as an accessory to the crime, or she could be liable for obstruction of justice and concealment charges. That said, she has an extra defense, Horowitz notes: She could also argue for “diminished mental capacity” and show evidence of PTSD and “battered women’s syndrome,” which would help her avoid the conspiracy and accessory after the fact charges, like Bonnie.

But right now Celeste has her more immediate custody battle against Mary Louise Wright (Meryl Streep) to deal with. We’ll learn soon enough how the lies play out on Sunday, when the final episode airs. 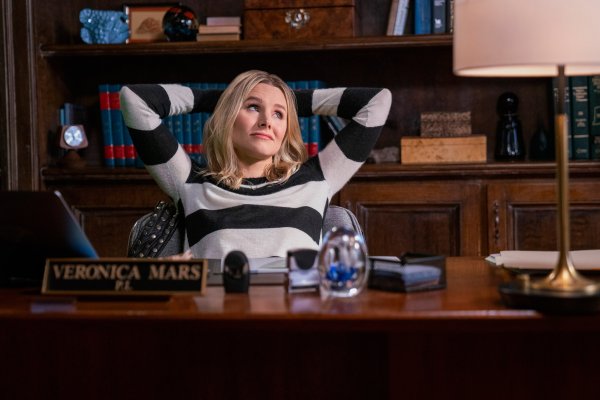 Veronica Mars Is the Best TV Revival Since Twin Peaks
Next Up: Editor's Pick