The True Story Behind Once Upon a Time... in Hollywood

With acidheads in the streets and upheaval in the studios, 1969 was a time of profound change not just in Hollywood, but in America at large. Across the country, the counterculture was clashing with authority. Meanwhile, in the movie business, new filmmakers were challenging old assumptions. Those dynamics set the backdrop for writer-director Quentin Tarantino’s ninth film, Once Upon a Time… in Hollywood (July 26), a loosely historical fiction starring Leonardo DiCaprio as the fictional Rick Dalton, a television Western actor facing a fading career, and Brad Pitt as his trusty stuntman Cliff Booth, who both must contend with the massive shifts at work in their industry and beyond.

As the counterculture movement took hold, bringing with it drugs, free love, psychedelic rock and a new attitude toward American life, norms were also changing in Hollywood. The movie industry was undergoing a transformation as the authority of old-fashioned studio executives began to be challenged by younger artists. “Those younger directors and actors are starting to make films, and a lot of their films are really popular — much to the irritation of the more traditional Hollywood,” explains Christine Lamberson, a historian at Angelo State University in Texas. Many of those movies upended long-held ideas of what could be depicted onscreen, including increasing levels of violence, as in 1967’s Bonnie and Clyde, and greater freedom with regard to sexuality, as in the same year’s The Graduate. The new Hollywood, as TIME wrote in 1967, enjoyed “a heady new freedom from formula, convention and censorship.”

Tarantino, whose first feature was released in 1992, has certainly benefited from more liberal attitudes toward showing violence in film. (When compared to his filmography up to this point, including blood-spattered films like The Hateful Eight, Django Unchained and Inglorious Basterds, Once Upon a Time is, until its final scenes, practically a gentle breeze.) In the director’s newest meta-epic, DiCaprio’s Dalton, who had achieved stardom in ’50s Western serials, runs square into the real-life historical changes that took place half a century ago, as he grapples with directors who want his hair and his costumes to be more hip and hippie-fied and audiences with a diminishing taste for the stiff theatrics of his earlier work.

Like the stories in several of Tarantino’s previous films, Once Upon a Time is a fictional narrative set against a largely historical backdrop. In this case, Dalton and Booth’s story plays out over the historical reality of the Tate murders, in which members of the Manson Family brutally murdered actress Sharon Tate and several others on the night of August 8-9, 1969. Here’s the true story underpinning the fictional events in Once Upon a Time… in Hollywood.

Cameramen film the scene as Charles Manson is brought into the Los Angeles city jail under suspicion of having masterminded the Tate-LaBianca murders of August 1969.
Bettmann—Bettmann Archive/Getty Images

Who were Charles Manson and the Manson Family?

In Once Upon a Time, Dalton and Booth come into contact with the Manson Family, a cult-like group of young women and girls under the sway of a charismatic ex-con, Charles Manson (played by Damon Herriman). In real life, Manson lived in the Los Angeles area in the late ’60s, drawing vulnerable young women into his orbit with pseudo-religious teachings and old-fashioned manipulation techniques. Surrounded by acolytes, Manson set himself up as something between a religious leader and a pimp, ordering his followers to sleep with the blind and feeble George Spahn (played by Bruce Dern), so the Family could stay for free at the ranch Spahn owned — where many TV shows like the ones Rick Dalton starred in had once been filmed. Members of the Manson Family included those who would go on to commit the Tate murders, as well as others like Lynette “Squeaky” Fromme (Dakota Fanning) who in 1975 was sentenced to life in prison after attempting to assassinate President Gerald Ford.

Manson had harbored dreams of music stardom and befriended many in the industry, including Beach Boys drummer Dennis Wilson, who in 1968 let the cult leader and his followers stay at Wilson’s Los Angeles house and helped Manson to record an album. The Beach Boys even ended up recording one of Manson’s songs, “Cease to Exist,” which was eventually released, substantially altered, as “Never Learn Not to Love” in 1968.

But Manson was not a harmless music industry hanger-on. Having developed substantial ability in manipulating young, vulnerable girls on the fringes of the California youth movement, Manson, an unhinged racist, preached to them about an apocalyptic race war that he dubbed “Helter Skelter,” named after the Beatles White Album song of the same name. Those ludicrous beliefs, along with Manson’s near-total control over his group of followers, would lead to the group committing a series of grisly murders in 1969, which over the years have become immortalized in America’s popular imagination.

Who were Sharon Tate and Roman Polanski?

In Once Upon a Time, Margot Robbie plays Sharon Tate, an actor who lives next door to DiCaprio’s Rick Dalton. Tate is at the start of a promising career, while Dalton faces stagnation in his own, facilitated by his alcoholism. Though in real life there was no Rick Dalton living next door, much of the rest of the film’s depiction of Tate is generally accurate.

Like in the movie, Tate was renting a house at 10050 Cielo Drive in Los Angeles during the summer of 1969 with her husband, filmmaker Roman Polanski. Tate was best known for her role in the film Valley of the Dolls (1967), while Polanski was fresh off the success of the now-classic Rosemary’s Baby (1968). In Once Upon a Time, Tate goes to see The Wrecking Crew (1968), a Dean Martin action film that was one of the last movies she acted in. The scene in which the ticket-taker (Kate Berlant) fails to recognize Tate, then asks her to pose for a picture next to the movie poster so that people will know who she is, speaks to the fact that her star had not yet fully risen.

In the film, the couple is shown hobnobbing with the stars of late 1960s Hollywood, including actor Steve McQueen (Damian Lewis) and singer Mama Cass (Rachel Redleaf). In one scene, Tate and Polanski attend a party at Hugh Hefner’s Playboy mansion, a scene that speaks to the charmed, carefree life they lived as members of Hollywood’s elite. While this scene is true to the spirit of the era, it is not literally accurate. There were no models dressed up as bunnies at the Playboy mansion in 1969, as Hefner didn’t actually buy the property until 1971.

Police guard the rented estate of movie director Roman Polanski after his wife, actress Sharon Tate, and four other persons were found slain August 9th. Visible in the background is a shroud-covered body.
Bettmann—Bettmann Archive/Getty Images

What actually happened on the night of August 8, 1969?

Without spoiling the movie, suffice it to say that in Once Upon a Time Tarantino takes his signature revisionist approach to history. The real events of August 8, 1969, on Cielo Drive, however, involve one of the most shocking and indelible crimes of the 20th century.

In real life, Manson ordered his followers Charles “Tex” Watson (played in the movie by Austin Butler) Susan Atkins, Patricia Krenwinkel, and Linda Kasabian to go to the house at 10050 Cielo Drive and kill everyone they found there. The home had previously belonged to Terry Melcher, a record producer who had refused to sign Manson to a recording contract. Melcher no longer lived there, and the home was then being rented by Polanski and Tate, who was eight months pregnant. When the Manson Family members came to the door, Polanski was away, working in Europe, but Tate was at home, along with one of Polanski’s friends, Wojciech Frykowski (Costa Ronin), his girlfriend Abigail Folger (Samantha Robinson) and Jay Sebring (Emile Hirsch), a celebrity hairstylist who was a friend and former boyfriend of Tate’s.

Outside the house, the cult members encountered Steven Parent, a teenager visiting a friend on the street, and killed him. Then the four Manson followers broke into the house and murdered Tate, Folger, Frykowski and Sebring with knives and a pistol in horrific fashion, stabbing each multiple times. On their way out, Atkins scrawled the word “PIG” on the front door in Tate’s blood.

Manson, who ordered the killings but wasn’t present for them, was found guilty of murder and sentenced to death, but his sentence was commuted to life in prison after California banned capital punishment in 1972. The others were all also convicted and received similarly commuted sentences, except for Kasabian, who served as the main prosecution witness and was granted immunity.

The murders sent shockwaves through American culture, many of which are still felt today in Manson’s continuous presence in pop culture even after his death in 2017. Manson had been vaguely associated with the California counterculture, though the cult leader twisted those ideas to fit his own perverted ends. For many, however, those horrific murders, along with other crucial events like the disastrous Altamont Concert (a massive impromptu concert festival in California that resulted in four deaths) contributed to the collapse of the movement, with hopes for a new and better society retreating in the face of shocking, anarchic violence. It’s those ideas that Tarantino plays with in Once Upon a Time, proposing — with his signature visual flair — a scenario in which things might have gone differently. 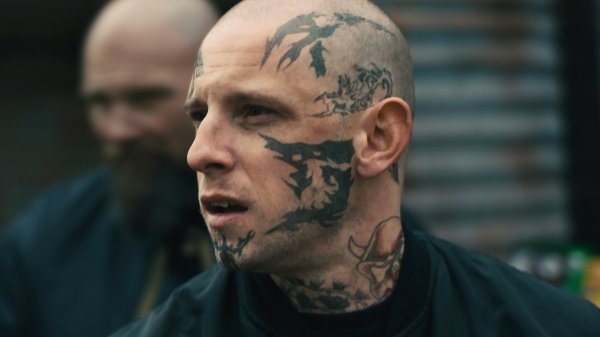 A Racist Seeks Redemption in Skin
Next Up: Editor's Pick