Only Succession could make a lavish yacht feel like a morgue. The season two finale of Succession played out like a twisted game show, with contestants voted off the boat one by one. But in the end, it was one of the exiled—Kendall—who got the last laugh.

Week by week throughout the season, we’ve keep track of the swift rise and fall of each character in HBO’s Succession in these power rankings, which are painfully subjective and based on a mix of corporate leverage, deftness of negotiation, personal turmoil and insults thrown and received. In our final installment of the season, here’s where everyone stands after the season two finale, episode 10, “This Is Not For Tears.”

Not even a full bottle of breakfast burgundy can make Connor forget the fact that he’s hemorrhaging money, his Napoleon penis was a fake and his play earned reviews so horrendous than an innocent iPad is now at the bottom of the Mediterranean Sea. As usual, however, he landed one of the episode’s best lines when making the case to sacrifice himself in the wake of corporate scandal: “Strap me into that sweet, sweet golden parachute and toss me into the volcano.”

Tom has always thought that if he remained a “loyal servant,” he would be duly rewarded. This episode, he finally came to the realization that powerlessness only multiplies. While he’s meekly accepted anything Shiv wants, she rewarded him by turning on him at the breakfast table. And when the rest of the table sensed his weakness, they piled on mercilessly, too.

It was only in this moment of utter defeat that Tom actually started to reckon with sense of personhood and agency aside from his commitments to others. “A lot of the time I think I’m really pretty unhappy,” he says to Shiv. We haven’t yet seen this side of Tom, who previously seemed to have only two settings: groveling or abusive. His show of heartfelt vulnerability actually struck a chord with Shiv, or at least guilt-tripped her into protecting him.

But while Tom showed he has a beating heart, he still doesn’t have much of a brain. His chicken gobbling maneuver with Logan was a superficial show of bravery but little more; it really just reinforced his unimportance.

Cousin Greg would be a sight to see on Survivor: he’s not threatening enough to be voted off in the early rounds, but he sneakily excels at knowing which alliance to cling to in any situation. He rode Tom up several floors and then gently discarded him; now he seems to be Kendall’s right-hand man. I have a nagging suspicion that his giving Kendall the documents could backfire spectacularly—but if an entitled, overlooked and floppy-haired boy can win it all on Game of Thrones, why couldn’t it happen on Thrones’ HBO successor?

In a conversation with her father, Shiv revealed the problem at the heart of her whole personality: “I can’t choose,” she says despairingly, when he asks her who should take the fall for the cruise division scandal. Shiv is possessed by hesitation and indecision: she liked the idea of Tom but not the way marrying him confined her; she liked Gil Eavis’ platform but not his personality; she disdained Waystar Royco until it was the only thing that mattered.

And in the end, she spent so much time overthinking her strategy and trying to maneuver in whispered backroom deals that she ended up sidelined, holding nothing more than a vague, noncommittal promise, while the brother she tried to bury once again took centerstage. She’s now fully implicated in the scandal; her idiot little brother was promoted faster than her; and the one thing she had full control of—her relationship with Tom—just combusted. Her premature coronation, it turned out, was just a misdirection leading back Kendall versus Logan, the series’ fundamental rivalry.

In the past, many Roman sideplots played out the same way: he took a shortcut to please his father, only for his harebrained scheme to backfire disastrously. At first, it seemed like his Turkish expedition would be more of the same.

But instead of crowing over a victory, Roman actually showed some judiciousness and backed away from a sham heroic moment. It seems like the management training, combined with Gerri’s tutelage, have turned Roman into the cunning and powerful operator that previously only existed as vague potential.

Roman also stood up for both Gerri and Kendall, showing that he might not be so self-centered after all. During the vote of no confidence last season, he showed his spinelessness by abandoning Kendall in the face of his father’s ire. Now that Roman has a newfound savviness and significant power as the sole chief operating officer, what side of the war will he end up on?

As I predicted last week, Kendall was the perfect blood sacrifice for Logan: legally implicated, personally expendable, publicly powerful. Ken himself seemed to realize this: when he asserted that Tom wasn’t a “big enough skull,” he essentially pointed the gun at himself.

Kendall has been trying to embrace self-flagellation and martyrdom ever since the tragic events of the season one finale, and this seemed like a perfect moment for him to fade gracefully into the wings. Naomi’s unexpected loyalty gave him something to live for outside of the family, and a soft landing pad. What better way for a murderer to live out the rest of his life than with no expectations, unlimited cash and a beautiful, powerful partner?

But Kendall is an addict; he can’t just quit the game he’s been playing his whole life. When exactly Kendall flipped is up for debate, but there were two significant turning points in his conversation with his father. The first was when Logan told him he wasn’t enough of “a killer” to have the top job, which only made Kendall want to prove him wrong. The second was when Logan dismissed the dead boy by invoking his infamous cruise code of “no real person involved.” The line reinforced Logan’s monstrousness, as well as the fact that the corporate cover-up did go all the way to the top. It also backfired due to the fact that Logan, in an act of sheer pettiness, brought Kendall along to the boy’s house, where he was forced to reckon with the fact that the young man he killed was not a NPRI, but a real person with a real, grieving family.

Kendall’s turn was a fearless and astonishing power grab; a head-spinning twist in a show full of them. But it may also have been extremely dumb and self-destructive. Even as Kendall points the finger at Logan, he implicates himself as a yes-man. He makes a foe out of the one man he’s never been able to defeat. How could the shareholders look at the mess that is the Roys and not immediately spring for the Sandy-Stewy combination?

What’s more, his honesty collapses the shaky code of silence that held up the entire paper-house operation. The breakfast table scene showed that every member of Waystar Royco is more than happy to turn on one another; it’s likely a battle royale will now play out in the public eye. Kendall got his revenge—but he’s wrought a chaos he seems ill-equipped to control.

Things look bad for Logan on the surface. His company is in shambles; his wife appears to have left him; his son has betrayed him, yet again.

But Logan dictated the tone and pace of the whole episode. And Kendall’s actions against him at the end of the episode could be read as not just an Oedipal betrayal but a passing of the torch. Logan wanted his successor to be a replica of him and his ruthlessness, to improvise under pressure and not cave even the bleakest of moments. When Logan watched Kendall on TV, the look in his eyes wasn’t fear—it was respect.

Logan thrives when he has a formidable opponent, whether it be Kendall or Marcia or Sandy. He’s defeated Kendall once before, and still has the ultimate trump card—the knowledge of Kendall’s murder.

There’s also a small possibility Logan wanted this to happen. When he tells Kendall, “What could you possibly kill that you love so much it would make the sun rise again?” there’s a homonym in there (sun/son) that foreshadows Kendall’s rebellion.

It’s more likely that Logan simply underestimated Kendall—and that his inability to cede control of the company, despite the fact that his stepping down would have been the easiest and most logical resolution, led to his downfall. But for now, he can bask in the fact that the man trying to tear him down looks and acts exactly like him.

Catch up on the rest of season 2 below: 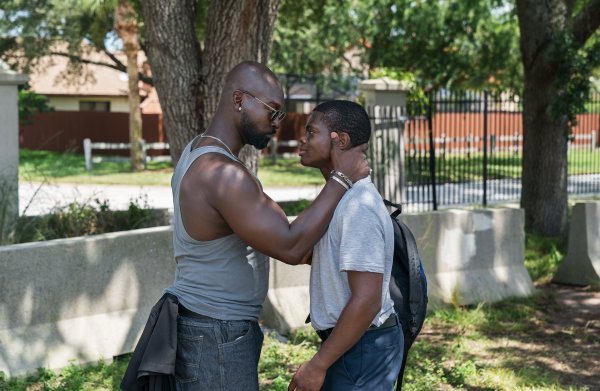 David Makes Man Is a Stirring Portrait of Black Boyhood From a Moonlight Writer
Next Up: Editor's Pick