The rules of Peak TV dictate that no successful miniseries remains a miniseries for long. In recent years, sensations like Big Little Lies and Top of the Lake have followed Downton Abbey’s road map from limited-series Emmy recognition to arguably unnecessary second seasons. Phoebe Waller-Bridge’s 2016 breakthrough Fleabag—a ferocious British character study that stars the creator as a sex-crazed, guilt-ridden young café owner—didn’t seem to demand a sequel. But what could’ve been a cash-in from Waller-Bridge, the writer and producer behind BBC America’s sleeper hit Killing Eve, turns out to be a masterpiece.

The protagonist known only as Fleabag hit her nadir in Season 1. Newly single, she mourned the loss of her best friend while self-medicating with sex. Her clumsy attempts to repair broken relationships with her disengaged father (Bill Paterson) and uptight sister (Sian Clifford’s Claire) only made things worse. The kicker was, they had an excellent reason to mistrust her.

Coming to Amazon Prime on May 17, Season 2 opens with a bloody-nosed Fleabag promising “a love story.” Set at a dinner where her dad announces his engagement to the smug girlfriend his daughters loathe (another perfect Olivia Colman performance), the masterly premiere finds our heroine reformed. She’s celibate. Her café is thriving. Yet it takes only one meal with her family—and the hot, foulmouthed priest (Andrew Scott) officiating the wedding—to threaten a year’s worth of progress.

Catholicism becomes the unifying metaphor of 33-year-old Fleabag’s “Jesus year.” Angelic choruses dominate the soundtrack as she wrestles sinful impulses and attempts the good work of saving Claire from a bad marriage. Breaking the fourth wall is Fleabag’s signature; since only the priest notices these asides, could she be talking to God?

Waller-Bridge isn’t proselytizing, exactly. The show’s humor remains raunchy, and the season’s secular patron saint is a tough older woman (the wonderful Kristin Scott Thomas) who credits her comfort in her own skin to the bodily liberation of menopause. The point isn’t that Fleabag needs religion. True redemption, the show suggests, takes more than good behavior. It can only come from decades of reckoning with who we really are. 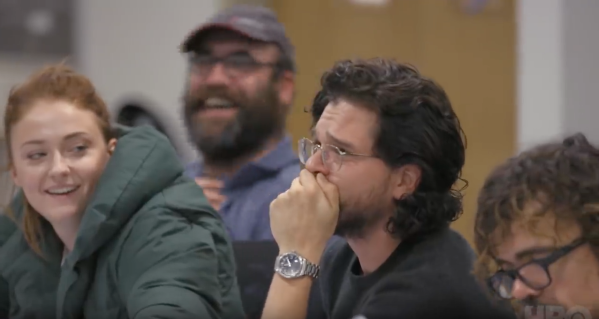 Jon Snow Tearing Up in New Game of Thrones Documentary Trailer Will Have You Missing Westeros Already
Next Up: Editor's Pick