The Best and Worst Moments of the 2019 Emmys

Game of Thrones may have taken home the top prize at the 71st Primetime Emmy Awards—but the night belonged to a different British import. Phoebe Waller-Bridge, the creator and star of Fleabag, filled the void of a hostless show with her frequent charming trips to the podium, breathing life into an otherwise uneven show. Here are the best and worst moments of the night.

Best: Speeches with a Purpose

Patricia Arquette speaks out for transgender rights while accepting the Emmy for Supporting Actress in a Limited Series or Movie for 'The Act' during the 71st Emmys.
Kevin Winter—Getty Images

While Hollywood award winners often use their platforms to grandstand for causes, the speeches tonight felt more powerful than usual because they entwined the personal with the political. Patricia Arquette called attention to the persecution of trans people by tearfully invoking her late sister Alexis, who was an actor and transgender activist. Michelle Williams stumped for equal pay by describing how the executives behind Fosse/Verdon empowered her performance. And when Thrones‘ Peter Dinklage won for Best Supporting Actor in a Drama Series, he stressed the importance of diversity, saying, “in no other place I’d be standing on a stage like this.” With his fourth Emmy for playing Tyrion Lannister, Dinklage set a record for most Emmys for Best Supporting Actor in a Drama.

Billy Porter accepts the Emmy for Lead Actor in a Drama for 'Pose' at the 2019 Emmys.
Kevin Winter—Getty Images

Two of the most enthusiastic standing ovations of the night went to the actors Billy Porter and Jharrel Jerome, who each made Emmy history. Porter, the star of Pose, became the first openly gay black man to win Best Lead Actor in a Drama Series. And according to Remezcla, Jharrel Jerome, a standout performer in Ava Duvernay’s ensemble drama When They See Us, became the first Afro-Latino to win an acting Emmy. Both handled their moments with swagger and grace, with Porter quoting James Baldwin and Jerome shouting out the subjects of his miniseries, the Central Park Five.

The undeniable star of the night was Phoebe Waller-Bridge, who brought an infectious zaniness to the proceedings while accepting three awards: Actress in a Comedy, Writing in a Comedy Series, and Comedy Series. Fleabag, which started as a one-woman show, was one of the night’s least predicted winners, fending off the previously unbeatable Julia Louis-Dreyfus and Veep at every turn. She also was part of one of the night’s best comedic bits, in which she and Bill Hader tore into the Limited Series category one show at a time. “It’s good to know a dirty, pervy, messed-up woman can make it to the Emmys,” she said, before adding after her final win: “This is just getting ridiculous.”

A character from 'The Masked Singer' and Ernst & Young representatives appear onstage during the 71st Emmy Awards.
Kevin Winter—Getty Images

The 2019 Emmys often felt like little more than a barely disguised Fox commercial. Two decades-old cartoon figures, Homer Simpson and Peter Griffin, were given prominent slots. Gotham led the montage of departing shows, which somehow didn’t include Orange is the New Black. And The Masked Singer was everywhere—in commercials; onstage, in the form of the character Thingamajig; and most egregiously, in the best-of-the-year montage. In the end, that was the only way for the channel to have a presence, given that they barely showed up in the awards races at all.

An initially dull bit in which Ben Stiller unenthusiastically lectured about comedy icons sprung to life when, after passing wax versions of George Burns and Lucille Ball, he arrived in front of a glowering, flesh-and-blood Bob Newhart. The 90-year-old proved he’s still got it, growling at Stiller, ““This legend is gonna kick your ass” and then adding with a flourish, “By the way, I hated you in Tropic Thunder.”

Buckle up: the streaming wars are in full swing. Amazon, HBO, Netflix, Apple+ and Disney+ all pumped money into one glossy commercial after the next. In these big-budget spots, movie stars, comic-book heroes, princes and princesses flicked by in a blur, rendering all of them mundane. Ironically, the most compelling commercial series was from relative (Disney-owned) underdog FX, whose “Fearless” spots were filled with transfixing and suspenseful shots from well-received shows like Pose, Atlanta and Fosse Verdon.

Maya Rudolph never fails to disappoint at awards shows, whether she’s paired with Fred Armisen, Amy Poehler or, in this case, Ike Barinholtz. The pair gleefully squinted their way through a gag mocking teleprompter struggles, with Rudolph reading: “Here are the nimrods in for dead ascot in a chocolate staircase.” Thanks to her bit, we’re pretty sure Michael Douglas has to legally change his name to Mickey Twotimes now.

Handing the show’s keys to Reno 9-11‘s Thomas Lennon as commentator was an intriguing gambit; it lent an irreverent, snarky edge to a show too often consumed in self-important smarm. But while Lennon did land some punches—including a sneaky dig on Felicity Huffman and her jail sentence—most of his quips simply weren’t funny. He called The Lion King: “Talking Lions: The Movie.” He did a mock Swedish accent. When Craig Mazin won, he said “More like Craig A-Mazin.” Not exactly the height of comedy.

Bryan Cranston talks about how often 'This Is Us' makes viewers cry during the opening of the 71st Emmy Awards on September 22, 2019 in Los Angeles.
Kevin Winter—Getty Images

The first hostless Emmys since 2003 leaned into its identity crisis: there was fourth-wall breaking, consciously sloppy transitions and many bits which questioned their own worth. Bryan Cranston called the show a “mess” within the first five minutes. Lennon gave up midway through a quip, instead saying, “That’s why people don’t do this: because it sucks.” And in a bizarre and misplaced song-and-dance number about variety series, Adam Devine shrugged at a man on stilts, singing, “I guess he’s also a thing.” The self-ambivalence was at times painful and at others strangely fascinating to watch.

We’re just going to close this out by leaving these photos here: 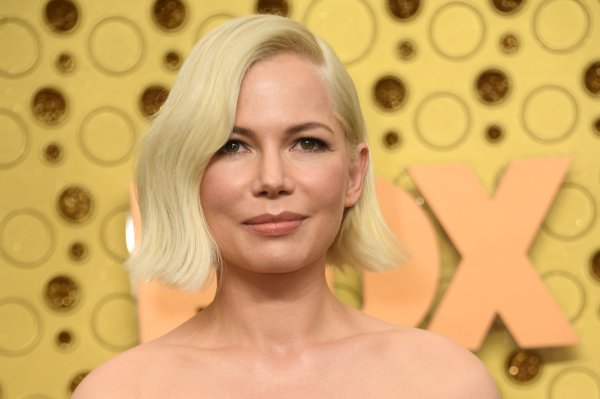 Michelle Williams Makes a Passionate Plea for Equal Pay While Accepting an Emmy for Fosse/Verdon
Next Up: Editor's Pick