Was anyone actually looking forward to the 2019 Oscars? In the lead-up to this year’s ceremony, the Academy of Motion Picture Arts and Sciences made—and quickly backed off from—a remarkable number of bad decisions. From the announcement of an “Outstanding Achievement in Popular Film” category to that time earlier this month when they earned the ire of cinema royalty with a short-lived plan to hand out several major awards during commercial breaks, each new decision felt more damaging than the last. Kevin Hart’s abortive hosting gig, followed much later by the news that he wouldn’t be replaced, also didn’t seem to bode well. Aubrey Plaza spoke for a nonplussed American public when she opened Saturday’s Independent Spirit Awards with an easy but effective Oscars joke: “The network’s first choice to host was no one, but they’re already booked for tomorrow, so you’ve got me.”

Little did we (or, for that matter, the Academy) know that “no one” was precisely the host this ailing Hollywood institution needed. With some notable exceptions—Roma’s handful of trophies, the awards for the women behind Black Panther‘s extraordinary costumes and sets, Olivia Colman’s Best Actress victory and the triumph of short doc Period. End of Sentence., whose director Rayka Zehtabchi endearingly blurted out, “I can’t believe a film about menstruation just won an Oscar!”—it wasn’t a great night for winners. Green Book, which many found retrograde, took Best Picture. A damning #MeToo exposé on its director, Bryan Singer, didn’t stop Bohemian Rhapsody from racking up awards. Yet without a designated emcee to slow things down with groan-worthy sketches and stupid audience participation segments, the telecast even felt punchy enough to compensate for the Academy’s hit-or-miss taste in movies.

Lady Gaga and Bradley Cooper’s steamy “Shallow” performance was a highlight, and it helped that neither the 2016 election nor the public reckoning with Harvey Weinstein and Co. had happened recently enough to cast a pall over this year’s proceedings. But it was the inspired lineup of presenters that made the ceremony so watchable. Maya Rudolph, Tina Fey and Amy Poehler were the perfect crowd-pleasing trio to open the Oscars by roasting the Oscars, on the heels of Queen and Adam Lambert’s energetic medley of the band’s blandest hits. Barbra Streisand introducing BlacKkKlansman sounded like a bad joke but turned out to be a well-researched bit of Brooklyn synergy that tickled Spike Lee. (And it was a relief to see him win a statue he’s deserved since Do the Right Thing, while speaking on slavery and the sacrifices made by women in his family.) I teared up when Guillermo Del Toro gave Alfonso Cuarón the Best Director Oscar and the two amigos embraced. It’s hard to imagine anyone more qualified to make the case for Green Book than a Civil Rights hero like Rep. John Lewis.

Even the less flashy presenter duos were low-key ingenious: 30 seconds of Jason Momoa and Helen Mirren, both in pink? Delightful. Javier Bardem—speaking Spanish, in a gesture that has taken on political resonance in this “build the wall” era—and Angela Bassett serving all the class that the foreign-language film category demands? Lovely. John Mulaney and Awkwafina, two of the funniest people in the entertainment industry, commiserating over their first-time Oscar jitters? Divine. Michael B. Jordan and Tessa Thompson, followed by Constance Wu, a vision in yellow on the arm of a glittering Chadwick Boseman? #TrueDetectiveSeason4 vibes. The presenters didn’t waste time with endless stiff, scripted repartee, either.

I’m no great fan of Hart, but I did worry that a ceremony without a host would feel disjointed. Instead, the lack of an emcee made every interaction less awkward; the atmosphere was more genuinely celebratory than it had been since Ellen DeGeneres’ sweet, goofy, pre-Trump Oscars of 2014. By the end of the evening, I was fully convinced that the Academy should give up on hosts for good. But I reserve the right to change my mind if Tina, Amy and Maya agree to do it next year. 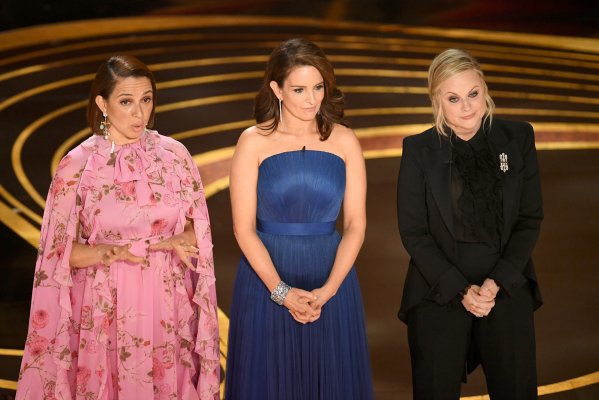 The Best, Worst and Most Totally Fine Moments of the 2019 Oscars
Next Up: Editor's Pick