Olivia Colman Reigns Supreme in The Crown and The Favourite

Hailed as a national treasure in Britain, actor Olivia Colman is emerging as a global star with two royal roles. First, she is earning Oscar buzz for her turn as the tempestuous Queen Anne in Yorgos Lanthimos’ The Favourite. Then she will take over for Claire Foy as an impassive Queen Elizabeth II on Netflix’s The Crown.

Lanthimos has built a reputation for morbid but wickedly funny works, and Colman had worked with him before on the delightfully bizarre film The Lobster. Departing from the stuffy realism of most costume dramas about British royalty, Lathimos approaches the true story of Queen Anne with a knowing wink: While the country goes to war, Anne and her maids race lobsters down gilded halls. Anne finds herself caught in a love triangle between two maids (Rachel Weisz and Emma Stone) vying for power and spends much of the film vacillating between childlike tantrums and genuine grief.

Queen Elizabeth II, Colman’s other character, might have viewed Queen Anne as a cautionary tale. Foy portrayed the queen in The Crown in the first two decades of her rule, as she acquired her stiff upper lip — even if that meant sacrificing the happiness of her family. Colman will star in the next two seasons, which will touch on similar themes: her Elizabeth will watch as the marriage of her sister (played by Helena Bonham Carter, replacing Vanessa Kirby) falls apart and as her son Charles meets his future wife.

TIME: Real royalty is rarely treated with irreverence. Did that attract you to The Favourite?

I loved that the film was done with the proper sexual urges. Just because they have on different clothes doesn’t mean they didn’t love and lose and swear at each other, just as we do now.

What drew you to Queen Anne?

I loved that she had every emotion under the sun every five minutes. That’s an actor’s dream. She’s spoiled and grieving and sensitive and cruel.

You could have played her as a caricature, but the audience feels sympathy for her, too. She’s experienced many miscarriages. She is growing sick. Did you discuss that balance with Lanthimos?

I can’t talk intellectually about acting, which makes me a rubbish interview, I know. Luckily, Yorgos doesn’t really like to talk about character either. In rehearsal, which was about two or three weeks, we really just played theater games. We’d hold hands in a long row and tie ourselves in a knot, like a big human pretzel, and then say each other’s lines as we untangled ourselves. It stops you from overthinking.

Queen Anne is in a love triangle with two of her maids, each vying for power. Do you think she has any genuine relationships?

I believe that Sarah Churchill was the love of her life, though she didn’t necessarily realize that soon enough. Being in a position of power, you never know if people genuinely like you for you. That’s why she loves her pet rabbits: they don’t care who she is.

She has a stroke midway through the film. Was that difficult to portray?

It was quite a fun challenge making the left side of my face move as the right stays still. It’s also an interesting moment for her. As the physical deteriorates, the mind sharpens. She’s beginning to realize what’s happening around her just as she couldn’t be feeling worse.

Critics have praised the film for its feminism.

I didn’t think when I read the script, “These are powerful women.” I don’t know why. I just thought, “These are three interesting people.”

Did playing Anne make you hesitate to play Elizabeth?

Not at all. To me, they are completely different women. I was so obsessed with The Crown that I was incredibly uncool when it was suggested to me and just yelled, “Oh yes, please!”

You are taking over the role of Elizabeth from Claire Foy. Has her performance influenced you?

I’m always thinking, “What would Claire do?” I’ve got to let that go a bit and make it my own. In one respect, playing Anne was much easier for me because I’m naturally an emotional person. If someone is sad, I burst into tears. So burying my emotions, as is Elizabeth’s duty when in public, has been tricky.

She is rather impassive.

In public, her duty is to be the strong one. She’s got to feel it, but she isn’t allowed to show that in front of other people. Behind closed doors is a bit of a different story, so I’m really enjoying contrast. It does seem to be a bit generational, doesn’t it? We’re finally getting to the point now where the younger royals are allowed to show their feelings — which I think is why we were all so taken with the Royal Wedding.

Has playing two monarch given you any insight into why we are obsessed with the royals’ personal lives?

Finding out real people live in those fairytale castles is eternally fascinating. And it still feels naughty, doesn’t it? I’m pleased I’m not doing the seasons when they get to the young royals — that feels far too close to home. 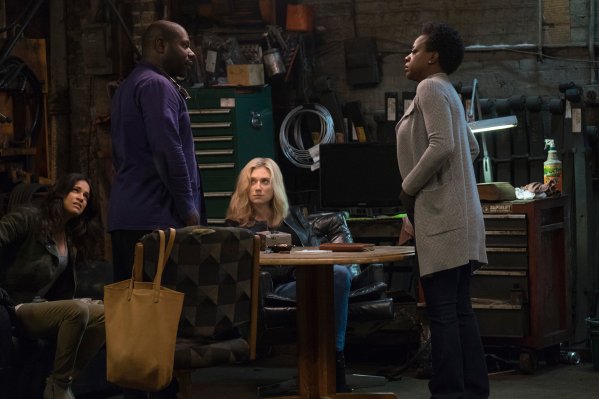 Let's Talk About the Ending of Widows
Next Up: Editor's Pick