Crazy Rich Asians Kicked Down the Door. Now Asian Americans Are Fighting To Stay in the Room

Awkwafina looks at her life as pre- and post–Crazy Rich Asians. “So much has changed,” the actor, born Nora Lum, says. “It impacts everything, every day.” When she was cast in the multicultural romantic comedy two years ago, she was a modestly known rapper and YouTube star accustomed to auditioning for parts that required her to use an accent. She, like many Asian Americans in film and TV, found that the roles available to them rarely reflected their actual experiences; instead, they serviced white stories or leaned on stereotypes.

Awkwafina’s career looks very different now. Crazy Rich Asians, released in 2018, was a global phenomenon that raked in $238 million at the box office and reinforced the idea that diversity could also mean good business. She joined several blockbuster movie franchises (Angry Birds and Jumanji); will star in a Comedy Central sitcom based on her life; and has earned rave reviews and Oscar buzz for her first dramatic lead role, in Lulu Wang’s The Farewell, out on July 12. As Awkwafina’s opportunities have increased, so have those of many other Asian Americans in film and TV. “Asian—American actors come to me and say, ‘I couldn’t get one audition before Crazy Rich Asians—now I’m auditioning every day,’” she says.

This shift isn’t just a matter of gatekeepers finally saying yes—it’s a change in the gatekeepers themselves. Over the past decade, Asian Americans have become showrunners, studio executives, lead agents and producers; they have formed tight-knit groups to champion one another and their stories. As a new wave of stories arrives—from The Farewell to the Netflix rom-com Always Be My Maybe to the Japanese-American internment-camp horror series The Terror—Hollywood is shifting away from what Awkwafina calls “the mirage of diversity” toward more specific and lasting forms of representation. Increasingly, it’s up to the Asian-American power players working behind the scenes to ensure that their community, so long ignored or tokenized, isn’t treated as a fad—and that they become integral to the worlds of film and TV.

The history of Asian Americans in cinema is bleak. Offensive caricatures have persisted through the past century, from Fu Manchu to Breakfast at Tiffany’s to Sixteen Candles. Even as Hollywood began reckoning in recent years with its racist past, the dialogue focused on the divide between black and white representation. Asian actors were still pigeonholed into narrow and reductive parts: Randall Park, for example, played doctors over and over again early in his career, including on Curb Your Enthusiasm and The Bold and the Beautiful. “The roles weren’t super offensive,” says Park, who co-wrote and co-starred in Always Be My Maybe. “But when you look back and realize how many doctors you play, you think, O.K., that’s how they see us.”

A report showed that while Asian Americans made up 5.4% of the U.S. population, they represented just 1.4% of lead characters in studio films in 2014. The issue also extended behind the camera: in 2018, another study found only 12% of showrunner positions to be held by people of color.

But a gradual shift is taking place, thanks to a mix of factors. Social-media campaigns, from #OscarsSoWhite to #StarringJohnCho, which reimagined blockbusters as if they featured the Korean—American actor, called attention to inequality and erasure. Movies starring and directed by African Americans, including Creed, Get Out and Black Panther, were all critically acclaimed blockbusters, altering the idea of what a hit could look like. And a new class of diverse executives at major studios greenlighted projects that might have been considered risky in a previous era. Asian Americans who used their newfound roles to promote diverse storytelling include ABC’s Samie Falvey, who pushed through Fresh Off the Boat, and Warner Bros.’ Kevin Tsujihara, who helped turn Kevin Kwan’s best-selling novel Crazy Rich Asians into a box-office juggernaut.

When that film became the highest-grossing rom-com in a decade, some Asian creators noticed a change in how their projects were received by major studios. Writer-producer Soo Hugh, for example, wasn’t expecting much when she came to Hollywood to pitch an adaptation of Min Jin Lee’s popular novel Pachinko. But after an fierce bidding war, the series was bought by Apple, led by veteran TV executive Michelle Lee. “I was shocked by the way the people reacted to this show in the marketplace,” Hugh says. “It was that cynicism that these doors were closed to me.”

Other writers were similarly galvanized in the wake of Crazy Rich Asians. A female Asian-American writers’ collective began meetings in which they share job opportunities and workplace horror stories (a recent study showed that 64% of television writers of color reported experiencing bias, discrimination or harassment). These writers say this unity has spurred them to create and push for idiosyncratic passion projects they wouldn’t have dared pitch a decade ago. “I don’t care what people think they want,” says Cindy Fang, a writer for Fresh Off the Boat. “I’m just going to write what I want.”

Writer-director Lulu Wang was equally persistent when it came to The Farewell. In the semi-autobiographical drama, Awkwafina stars as a Chinese-American woman struggling to say goodbye to her grandmother, who doesn’t know she has terminal cancer. The film is driven by hyperspecific cultural differences and set in drab apartments; it floundered in development hell for years. “The first question people would ask was, ‘Is this a Chinese film or an American film?’” Wang says. Potential partners wanted to change plot points or make characters white.

Wang insisted on preserving each detail, even if it meant the story would never be told. She eventually found producers willing to give her creative control, and in January, The Farewell premiered at Sundance to rapturous acclaim and was picked up by A24, which has distributed films including Moonlight and Lady Bird. Upon wide release, Gold House—the Asian collective that helped propel Crazy Rich Asians—will launch a campaign to buy out theaters, host VIP screenings and spread awareness on social media. The improbable result of this concerted effort is that an Asian-American movie that nearly never saw the light of day has a chance to compete at the 2020 Oscars.

Despite the progress made over the past couple of years, some Asian-American film veterans are hesitant to declare victory in a fickle industry. “We have been promised this change before and been disappointed,” Hugh says. Tsujihara’s resignation from Warner Bros. in March after a sex scandal means there are no major studio heads of color. Many activists say that different types of Asians, including South Asians, are still under-represented. And a slew of Asian-led pilots that were created after Crazy Rich Asians failed to find homes.

But the next couple of years will have no shortage of Asian-led projects. Disney’s live-action remake of Mulan will arrive in theaters next year, while Netflix will host the anime adaptation Cowboy Bebop, starring John Cho, and Master of None co-creator Alan Yang’s drama Tigertail. Awkwafina and other Asian-American creators hope to push the door open wider and wider, knowing that the former status quo is barely in the rearview mirror. “You don’t understand how important representation is,” she says, “until you see it and realize you’ve been missing it your whole life.” 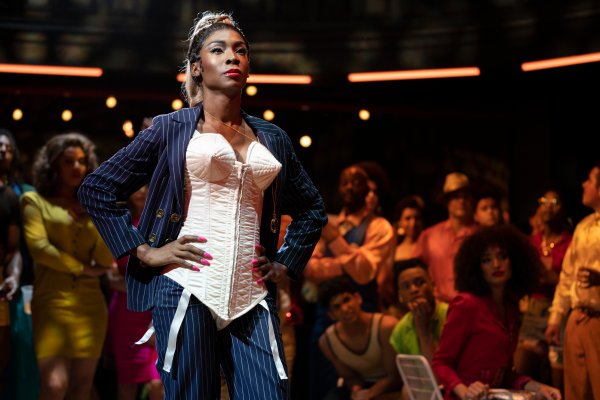 ‘The Tears Were Real.’ Ryan Murphy and Janet Mock on Pose’s Most Emotional Episode Yet
Next Up: Editor's Pick