Getting Into the Holiday Spirit, Taylor Swift Releases a New Christmas Song — With Fans Identifying a Possible 'Easter Egg' Moment Too

To mark this festive, gift-giving time of the year, Taylor Swift has just released a new single, “Christmas Tree Farm.” The surprise track is accompanied by a music video full of Swift’s childhood home movies — the singer grew up on an actual Christmas tree farm in Pennsylvania. The vintage VHS-feeling video is filled with a tiny Swift romping in pink pajamas, digging into her Christmas stocking, unwrapping a tiny guitar, and sitting on Santa’s lap. It’s adorable and nostalgic and very on-brand.

Amid all the holly jolly merrymaking on the tinsel-strewn trip down memory lane, a few eagle-eyed fans spotted something interesting — a time stamp of November 23, 1989 on one of the VHS moments featured in the video. If there’s one thing that can unite a musician’s fandom in 2019, it’s the opportunity to dissect their fave’s work for hidden clues and/or Illuminati messaging. While most probably glossed over the seemingly innocuous date, Swift’s ardent fans honed in on it, noting that she wasn’t born on November 23, 1989. In other words, it’s representing a memory or moment Swift, amid a song filled with said holiday memories and moments, couldn’t actually have first hand. (Her date of birth is Dec. 13, 1989.) Also, the blurry Nov. 23 footage is just of some horses in a snowy field — hardly crucial.

So then, since Swift is known for sprinkling Easter eggs into her music and videos, fans think the date is a clue as to potential new music, the re-recording of old music, and much much more. While she is a powerful figure in the music industry, as far as we know Swift can’t travel back in time to release a new (or, technically, old?) album in 1989.

Nov. 23 next year, or in fact Nov. 23 on any given year in the future, is fair game! Another fan theory is that the date mark be the day that Swift can start re-recording her old albums; Swift is engaged in an ongoing dispute over her old albums and has decided to re-record them to regain control.

Or perhaps, if you add all the date’s individual digits together, you get 34 — which is the atomic number for Selenium, which could refer to Swift’s close friend Selena Gomez and a possible future duet? (Yes, that theory was just made up on the fly.)

For now, then, only time and, eventually, Taylor Swift will tell. 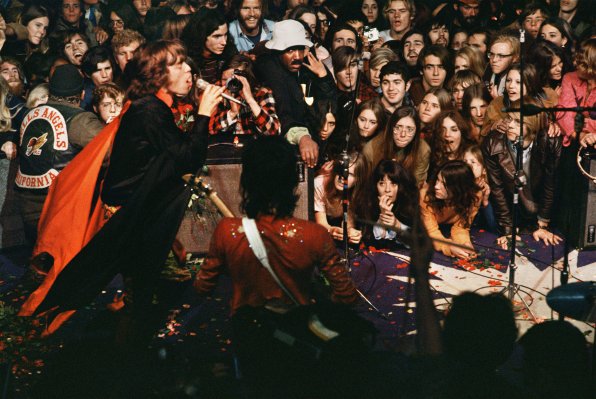 The Daydream of the 1960s Ended 50 Years Ago at Altamont. Here’s What the Rolling Stones' Official Photographer Saw That Day
Next Up: Editor's Pick