The Best and Worst Moments of the 2019 Grammys

A show-stopping legend, a revelatory newcomer, a confused tribute. The 61st Annual Grammy Awards stretched across four and a half hours and contained its share of both triumphant and cringe-inducing performances. Here are some of the best and worst moments of the night.

An Exuberant Opening From Camila Cabello

The Grammys are perennially slow-on-the-uptake, and true to form, they kicked off this year’s show with a two-year-old song that was performed at practically every music awards show last year. But Camila Cabello made “Havana” sound fresh. She glided through a color-coded doll’s house with panache and effortlessly knocked out the splashy choreography alongside a swarm of virtuosic dancers.

The rest of the opening number served as irrefutable proof that the center of the pop world has shifted south. A host of Latin stars, from Ricky Martin to Arturo Sandoval to J. Balvin, plunged onto the stage, showcasing the many differing threads of Latin pop while sharing a unified exuberant joy.

Dolly Parton Steals Her Own Show

Katy Perry and Kacey Musgraves belted their way through “Here You Come Again.” Miley Cyrus navigated the sloping runs of “Jolene” with ease.

But none of them could touch the real thing.

In her own tribute, Dolly Parton absolutely mopped the floor with her inheritors, proving both her enduring musical legacy and lasting vocal prowess. She toggled between casual, defiant and wistful phrases with grace; she led a hair-raising three-part harmony on Neil Young’s “After the Gold Rush” with pinpoint precision. The other performers, from Little Big Town to Maren Morris, sometimes stopped singing to gaze at her, transfixed.

And in case you thought her career was on the wane, she saved her best performance for “Red Shoes,” a new song from the soundtrack to the Netflix movie Dumplin’. The exhilarating and plaintive song paid tribute to her childhood and the women who raised her, and it sounded even better than her established hits.

A Starring Role for Keys (And Not Just Alicia)

Plenty of performers nailed their black and white outfits, from Dua Lipa’s safety-pinned dress to Young Thug’s crisp white tux with giant black lapels. But the biggest two-toned star of the night was the piano.

It was there early on, lifting up Kacey Musgraves’ ballad “Rainbow,” and then providing a Baroque flourish to Cardi B’s jittery “Money” (and an elegant surface for the rapper to recline on). Then host Alicia Keys, each hand on a separate Yamaha, turned the stage into a cabaret revue for a few minutes, racing through Roberta Flack’s “Killing Me Softly With His Song,” Nat King Cole’s “Unforgettable,” Drake’s “In My Feelings” and Ella Mai’s “Boo’d Up” and many more. It was an invigorating showing for an instrument three centuries old.

Kacey Musgraves accepts the award for Album Of The Year for "Golden Hour" onstage during the 61st Annual Grammy Awards on Feb. 10, 2019, in Los Angeles.
Robyn Beck—AFP/Getty Images

For the first time since give or take 2012, the Grammys actually got the Album of the Year… right?! Kacey Musgraves’ Golden Hour is drop-dead gorgeous; it uses sleek modern production values to buoy big-hearted melodies. It poignantly captures both the wooze-inducing flutters of first love and the leaden density of heartbreak.

And Musgraves was equally impressive while performing “Rainbow,” the album’s closing hymn to resilience. Rather than scaling up to match the bombast of the night, Musgraves delivered the song quietly over simple piano chords; she made the Staples Center feel shockingly intimate, and the night came to her.

A Breakout Star in H.E.R.

The Grammys prefer established stars and mashups—it’s not often that they give a full slot to a relatively unknown artist to introduce them to the world—which is why H.E.R.’s performance was all the more breathtaking. The reclusive artist has previously thrived in stripped down, backroom settings, so it was revelatory to see her absolutely shredding her guitar and commanding a full gospel choir and string ensemble through a call-and-response.

At the end of the song, “Hard Place,” she took a big breath—not because she had run out of steam, but to bask in the moment. The performance, combined with her win for Best R&B Album, felt like the formal coming-out party of an artist that could command the same stage for years to come.

The central conflict of A Star Is Born pits pop spectacle against authenticity. But on Sunday night, Lady Gaga showed that you can have it both ways. In her performance of “Shallow,” Gaga ditched her character’s white tee for a full-bodied sequined jumpsuit; she head-banged, high-kicked, and mugged straight into the camera, all the while delivering the immaculately crescendoing song with strength and precision. She made Bradley Cooper entirely superfluous, setting the bar high for her upcoming Oscars performance.

But nothing made sense about their distractible and poorly mixed medley. After fumbling through the acoustic “Stay,” Post Malone performed “Rockstar” seemingly underneath the stage, covered with fog, as if the Grammys were embarrassed to have him there. It was not only a laconic rendition, but also a missed opportunity to address the plight of 21 Savage, who is featured on the song and was arrested last week by U.S. Immigration and Customs Enforcement.

When Post Malone wandered up to joined the Peppers, there was no effort to try to meld their styles: he was instead turned into a backup guitarist, aggressively strumming a possibly unplugged axe as Anthony Kiedis and company performed a non-hit from three years ago. A lot of sound and fury, but no direction.

The Glaring Absences of Childish Gambino and Others

While Drake’s appearance was a pleasant surprise, the list of prominent no-shows stretched embarrassingly long: Beyoncé, Jay-Z, Kendrick Lamar, Taylor Swift, Bradley Cooper, Ed Sheeran, Justin Timberlake. The most glaring absence of all was that of Childish Gambino, who snagged two of the night’s top prizes (Record of the Year and Song of the Year), forcing Alicia Keys into an awkward pivot. The fact that he appeared in a Google Pixel commercial during the broadcast, dancing against a digitized version of himself, made his absence all the more humiliating for the production.

Jennifer Lopez’s rump-shaking Motown tribute was fun enough. But many online had questions—both about the authenticity of her crystalline singing voice (could it actually have been live?) and her very selection for the gig. Lopez, a Latina singer who was never signed to Motown, seemed an odd pick to represent America’s preeminent black-owned record label. It was even weirder that she was asked to carry the brunt of a sixty-year history mostly alone—especially given that Diana Ross and Smokey Robinson were right there, and that Dolly Parton got about ten performers to herself.

A Thin-Skinned Ceremony Cuts off Drake and Dua Lipa

The Grammys are very quick to tell you how great they are. They are less enthusiastic when somebody disagrees. When Drake denounced the importance of the Grammys while accepting his trophy for “God’s Plan”—”You don’t need this right here. You already won,” he said—his microphone was promptly cut off. A similar thing happened to Dua Lipa, who, while accepting the award for Best New Artist, delivered a rejoinder to outgoing Academy president Neil Portnow’s comments from last year’s ceremony that women need to step up: “I guess this year we really stepped up.”

Too Little, Too Late for a Resplendent Diana Ross

Diana Ross looked and sounded magnificent on “The Best Years of My Life” and “Reach Out and Touch (Somebody’s Hand).” But the performance was too little, too late for a legend who was never awarded a Grammy until a lifetime achievement award in 2012. (It sounds more shocking and ridiculous every time you think about it anew.) Her grandeur, combined with her lifetime snubbing, only served to prove Drake’s diatribe true.

The original version of this story misstated the type of pianos Alicia Keys performed on during the Grammys. They were Yamahas, not Steinways. 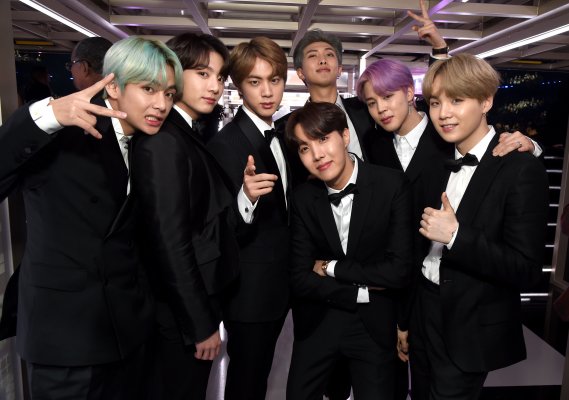 How BTS Made Sure Their First Grammys Were Unforgettable
Next Up: Editor's Pick