BTS Kicks Off a New Era with a Map of the Soul: Persona Teaser

They’re back — or at least, RM is back, in a new “comeback trailer” kicking off K-pop supergroup BTS‘s next musical era. Following up their past two years’ run with the Love Yourself album trilogy, which continues to top charts, BTS announced they were entering a new phase entitled Map of the Soul. Their new album Map of the Soul: Persona is scheduled to drop April 12. (They’ll also perform on Saturday Night Live for the first time on April 13.) So this surprise teaser gives fans the first taste of the new sound and direction for the world’s biggest boy band, which consists of RM plus J-Hope, Suga, Jin, Jungkook, Jimin and V.

In the teaser, group leader RM (real name: Kim Namjoon) raps in Korean without stop for nearly two whole minutes before a chorus break; it’s a flex. “Where’s your soul? Where’s your dream? Do you think you’re alive?” he asks, mining existential questions for lyrical value and nodding at his own history of self-doubt and personal pressure. (Hint: for the full effect, non-Korean-speakers should turn on YouTube’s subtitles.)

BTS have long focused on themes of struggles with self-confidence, self-knowledge and self-actualization in their songs, but Map of the Soul, which references a Jungian psychology theory, seems to be going further. It also sounds different, thanks to a guitar-heavy beat. As for the visuals in the video, there’s plenty to unpack, from an army of clones led by RM to a hall of mirrors and a graffitied classroom.

While this may be titled a “comeback trailer,” BTS hasn’t exactly gone anywhere. Love Yourself: Answer was released in August, RM dropped an independent collaboration with English electronic duo Honne earlier this week and the seven-member group have been performing at shows this year so far in Singapore, Japan and Hong Kong, with a series of U.S. tour dates scheduled for spring. And that’s not to mention their new dolls. 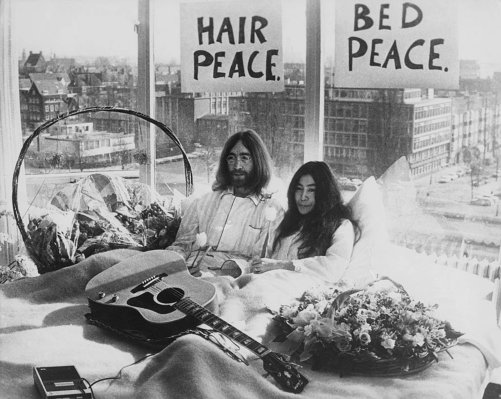 Behind the Photo: How John Lennon and Yoko Ono Came Up With the Idea of Their Bed-In for Peace
Next Up: Editor's Pick