The True Story Behind the Movie Hustlers

On June 11, 2014, four women and one man were indicted for allegedly drugging men and charging thousands of dollars on their credit cards at New York City clubs. Five years later, one of those women — Roselyn “Rosie” Keo, considered one of the scheme’s two ringleaders — posed for photographers at the Toronto International Film Festival.

Keo, who was sentenced to five years probation in 2016, was in Toronto to watch her own story play out onscreen in Hustlers, a new movie from writer-director Lorene Scafaria, which premiered at the festival on Sept. 7 and hits theaters nationwide Sept. 13.

Hustlers is based on Jessica Pressler’s December 2015 New York magazine article “The Hustlers at Scores,” for which the journalist interviewed both Keo and the scheme’s other leader, Samantha Foxx (née Barbash; this story will refer to her as Barbash since that is the name she went by at the time and the name listed in court documents). The women recounted a deep friendship which turned to sisterhood which then turned dark.

When Scafaria read Pressler’s article, the filmmaker tells TIME, she “found it to be a fascinating friendship story at its core.” She says she knew that if she were to adapt this story for the screen, it had to come from Pressler’s article, rather than court documents and tabloids. This way, a character based on Pressler could serve as a stand-in for the viewer, allowing the audience to empathize with the characters. “I thought that Jessica and Rosie’s relationship was incredibly interesting — the relationship between a storyteller and their subject,” Scafaria says.

Though some details of what the Special Narcotics Prosecutor called a “repugnant scheme” are altered for the film, Scafaria set out to be faithful to the story Pressler wrote, even cutting out the movie’s sound at one point when a recorder being used by the movie’s reporter (who is based on Pressler and played by Julia Stiles) is flipped off. She changed the names of the leading women: Roselyn Keo becomes Destiny, played by Constance Wu; Jennifer Lopez’s character, Ramona, is inspired by Barbash; and their business partners, Karina Pascucci and Marsi Rosen, are loosely translated into Annabelle (Lili Reinhart) and Mercedes (Keke Palmer). Cardi B, Lizzo and a male R&B star (whose identity is best left to viewers to learn upon watching the film) make appearances in the film, too.

“There’s a responsibility to the truth and what really happened,” Scafaria says, “and it’s not a black and white story, after all.”

Here’s the true story behind the movie Hustlers.

According to the account she told Pressler, Keo discovered the world of New York City strip clubs after her parents, Cambodian refugees, left her and her brother with their grandparents. “My mom wasn’t able to help me,” Keo told New York in a new interview published online Sept. 10. “Who knows what kind of person I would’ve been if she was there to back me up. Would I have worked so hard, would I have hustled so hard, the way I did, knowing I had something to fall back on?”

That hustling began with stripping at a local club in Rockland County, where Keo grew up, around an hour and a half’s drive from New York City, before she moved on to bigger opportunities at Times Square’s Flash Dancers club and Larry Flynt’s Hustler Club. She met Barbash at Hustler. It was 2007 when the two started working together to make money from “mostly Wall Street guys,” Barbash told Pressler. At this time, their work was legal, earning money in tips and gifts from their male clientele.

It was hard work, though. “The men were mostly assholes,” Pressler wrote. And it wasn’t always glamorous or lucrative. “The girls were the main draw; this was as plain as the neon lights outside every strip club in America. Yet traditionally, instead of the clubs paying the dancers, the dancers pay the clubs for the privilege of working there.”

Scafaria says this aspect of the story — that the women were “up against a value system that’s a little broken” — adds more nuance, and she hopes viewers of Hustlers will understand the forces at play behind their decisions. This story underscores the notion that in strip clubs and in the world, “women are valued for their beauty above all, and men are valued for their money and success and power,” Scafaria says. “The rules of the club are kind of the rules of the world.”

How the Hustlers women went from stripping to stealing

Keo took a break from the club scene to have a baby, and upon her return, she found the climate in her industry had changed. The 2008 financial crisis had taken a toll on the clubs’ clientele, which meant a downturn in the women’s pay. Barbash turned away from stripping and found that “fishing” (or “marketing,” as she called it) was much more lucrative. In this approach to her work, she and other women would find men who would be down to drink, dance and maybe end up at a club, hopefully shoveling tips in the women’s direction along the way. She ran “a crew of dark-haired minions who would pick men up and bring them into the clubs,” Pressler wrote. That crew included Pascucci and Rosen.

Fishing was lucrative because the women essentially had rolodexes of previous clients — typically wealthy men who would want to drink and party at strip clubs. As Barbash explained to Pressler, and as Scafaria stages in the film, one of the women would meet the client for a drink before the others showed up. “Drunk on alcohol and feminine attention,” Pressler wrote, they’d “steer him toward one of the clubs from which they had negotiated a lucrative percentage of his spending.” Those clubs included Scores on the West Side of Manhattan and RoadHouse NYC Gentlemen’s Club in Flushing, Queens, according to the Office of the Special Narcotics Prosecutor’s indictment. Once they arrived at one of the clubs, the women would run up his credit card.

But the scheme wasn’t faultless — some men would say they were too tired for a club and refuse to take drugs. So Barbash invented a concoction. A combination of ketamine, methylone (or “molly”) and cocaine was used to make them relax, have fun and forget, according to the indictment. “In many cases, drugs were secretly administered to the victim without their consent,” the office’s press release said.

“It sounds so bad to say that we were, like, drugging people,” Keo told Pressler, adding that the men were very wealthy. “But it was, like, normal.” In her eyes, these clients were all supposed to be guys who had been to the strip clubs before. “They had history,” Keo said. “They all walked in ready to party.”

The downfall of the Hustlers scheme

The women’s scheme began to falter when men started to realize what had happened to them. One victim, given the pseudonym Fred in Pressler’s account (and Doug in Hustlers), met Barbash and Keo at a time of utter turmoil in his life: His house had been destroyed by a hurricane and he was separating from his wife. He and Keo bonded over their children. “He talked about how his wife left,” Keo told Pressler. “I don’t think she could handle it, because having an autistic child is a lot of work.”

Keo said they then went to RoadHouse and “cleaned him out completely,” even when he begged for them to give back the $17,000 they took from his debit and credit cards. “Doug” called the New York City Police Department and played them a recording of a conversation he had with another former stripper who had worked with the women. (The NYPD never revealed the identity of the informant.) On the tape, she admitted to the drugging and theft.

Investigators struggled to find more victims who were willing to speak. “The amount of people willing to talk to us was so small it was absurd,” one officer later told Pressler in an interview. “Men don’t want to admit to being victimized by women.” Though authorities wouldn’t confirm it when Pressler wrote her original story, a representative from the Drug Enforcement Administration’s New York Division confirmed to TIME that investigators conducted a sting operation in order to catch the women.

Around the same time, in the spring of 2014, The New York Post ran a story about a cardiologist who “refused” to pay the $135,000 bill charged to his credit card at Scores, another New York City club in circulation for Keo and Barbash. Zyad Kivarkis Younan claimed “that he couldn’t possibly have rung up that high a bill without having been drugged,” the Post wrote, after Scores had sued the doctor to recoup the funds.

The indictments came within two months of that article’s publication.

The charges against the Hustlers women

After eight months of investigating, a joint effort by the New York City Police Department, the Special Narcotics Prosecutor’s Office and the Drug Enforcement Administration (DEA) led to the indictments of Barbash, Keo, Rosen, Pascucci and Carmine Vitolo, a manager at RoadHouse. The group’s scheme “involved not only the theft of $200,000, but compromised the health, safety and security of victims by covertly giving them harmful substances,” Special Narcotics Prosecutor Bridget G. Brennan said in a press release at the time.

All four women and Vitolo pled guilty to their crimes, with Keo taking a plea deal that kept her out of jail entirely. “I thought about it, and I’m, like, the only one of those girls that’s normal, with a brain on my head, with a child and a future,” Keo told Pressler. She and Barbash were both sentenced to five years’ probation, while Rosen and Pascucci were sentenced to four months of weekends in jail and five years’ probation.

Keo is now writing a book, which she told New York Magazine will be called The Sophisticated Hustler.

The original version of this story misstated who confirmed that there was a sting operation in the investigation. It was a representative from the Drug Enforcement Administration’s New York Division, not from the Special Narcotics Prosecutor’s office. 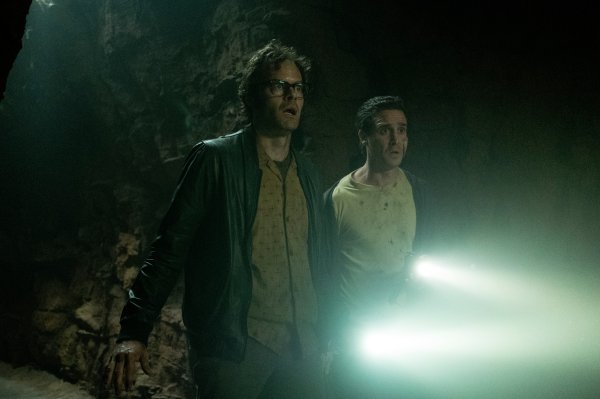 How IT Chapter Two Handles the LGBTQ Themes of Stephen King’s Novel
Next Up: Editor's Pick