See the Cities Where You Can Be Happier With Less Money

Would you be happier with more money? Only up to a point, and that threshold depends on where you live, shows new research provided by Gallup to TIME. In Atlanta, happiness peaks among people making about $42,000 a year—the lowest price tag on happiness among cities analyzed. But in Seattle, New York City, Philadelphia and Los Angeles, it takes roughly $105,000 a year to reach the same level of happiness.

Gallup and Sharecare, a personal health company, analyzed over 350,000 interviews with Americans in 2015 and 2016 to determine how income affects people's daily emotions, measured with questions like "did you experience enjoyment during a lot of the day yesterday?" and "did you smile or laugh a lot yesterday?" Researchers compared results across 12 metro areas (where sample sizes were large enough across all income groups). 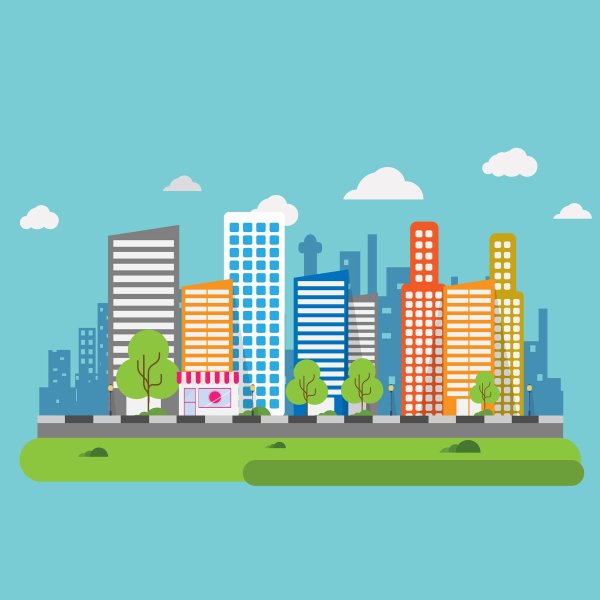 They found that happiness hits a ceiling everywhere, just sooner in some place than others. "It isn't like in some regions you cap out at higher happiness than others," says lead researcher Dan Witters. So New Yorkers making $105,000 are no happier than Bostonians making $75,000, or Atlantans making $42,000.

Witters' findings support a 2010 study, by economist Angus Deaton and psychologist Daniel Kahneman, showing that daily positive emotions peak at $75,000 nationally. "Our numbers land right around the same spot 6 years later," Witters says. His research suggests that cost of living substantially impacts daily emotions. It also provides evidence for the theory that while daily happiness peaks with higher income, overall life satisfaction continues to rise past $75,000. The former measures more immediate feelings with questions like "did you smile or laugh a lot yesterday?" while the latter gets at long term fulfillment with questions such as "looking back on your life, how satisfied are you?"

Income's impact on emotions also varies regionally, with central states reaching peak happiness around $54,000, just shy of U.S. household median income at $55,775. Incomes around $105,000 were required to peak daily happiness along the West Coast and mid-Atlantic. 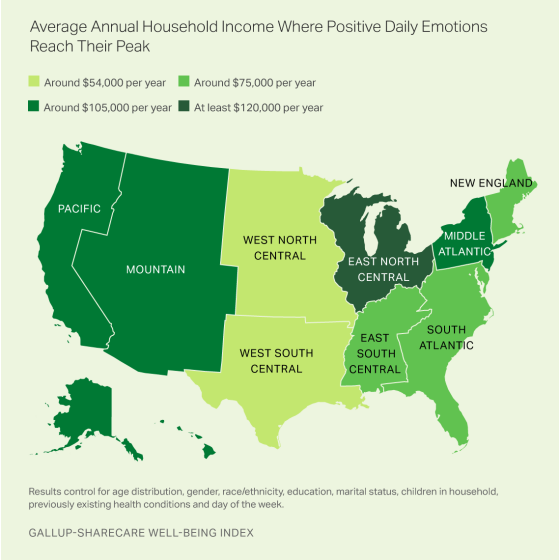 Surprisingly, the Great Lakes area required the highest income before happiness plateaus—at around $120,000 a year. "We've learned a lot about the economy and working class residents of these areas, and what's happened with their well-being over last several years," says Witters. "I think it's a fair hypothesis that this is a reflection of people feeling disenchanted, disgruntled, left behind."

Should people move to areas where happiness costs less? "It ought to be a consideration that's on the menu," answers Witters. "With some regions, like West North Central and South Central—right in the middle of America—it takes a lot less money to maximize the chance that you'll have a really good day."