Why TIME Decided to Revisit a Century of Women and Influence

Photo-Illustration by Neil Jamieson for TIME
By Nancy Gibbs

Throughout its history, editors of TIME aimed their curiosity at those who broke free of gravity. Week after week, year after year, the magazine featured an individual on the cover, often from Washington but also from Wall Street or Hollywood, from foreign palaces and humming factories, all outstanding and almost always men. The “great man theory of history,” so aligned with the American gospel of bootstraps and bravado, meant that power boiled down to biography, and to be on the cover of TIME meant that you had, literally, made big news.

I wonder how different those weekly assessments would have been had there been any women in the room where they were made. It would be many decades before TIME’s leadership included many women, 90 years before a woman ran the whole thing. Likewise in Congress and courtrooms and corner offices and ivory towers, it was largely men who were writing the first draft of history, deciding what mattered, and who mattered, and why. So now that we are marking anniversaries, it was an irresistible exercise to go back and look again, at different ways of wielding power, and the different results derived. Women were wielding soft power long before the concept was defined. On the 100th anniversary of women’s suffrage, TIME’s editors and collaborators revisited each year since 1920, looking for women whose reach transcended their time. Their influence in public and private life was not always positive; part of this exercise is acknowledging failures and blind spots as well as genius and vision.

There were always women who wore the crown, literal or not: Queen Soraya Tarzi of Afghanistan or Queen Elizabeth II of England, global stateswomen like Golda Meir, Indira Gandhi, Margaret Thatcher, Corazon Aquino. But it is interesting that the first woman to appear on the cover of TIME, in the summer of 1923, was an Italian actor named Eleonora Duse, who had announced that she would come out of retirement to tour the U.S. “Her art rises to supremacy through her magnificent repression,” TIME wrote, “her submersion of personality in her part.” Honor and glory through “magnificent repression”—a parable of herstory.

Some art forms are more subversive than others, telling stories on the surface with countless layers beneath. From a hardscrabble childhood in Chattanooga, Tenn., the great blues artist Bessie Smith made her way from street busker to singer to such success that she traveled in a custom railcar. She recorded “Downhearted Blues” in 1923, which went on to sell nearly 800,000 copies within the year and eventually made Smith the highest-paid black entertainer of her era. She sang of prison and betrayal and capital punishment, of poverty and pain and the complex loves of an openly bisexual woman in the ’20s. How do we measure that influence on generations of African-American protest music? Or the impact of the indelible dance disrupter Martha Graham, whom TIME would name “Dancer of the Century” in 1998 but whose concert ensemble’s debut was called Heretic. Or photographer Dorothea Lange, who started out shooting portraits of the privileged but whose eye gave us the faces of poverty and pride during the Depression: “You will find it hard to forget this material of human erosion,” one reviewer wrote of her incomparable curation of calamity.

Many of the women on this list exercised their influence at the margins, in defense of the marginalized. Recy Taylor, victim of a brutal rape by a gang of white men in 1944, defied intimidation and insisted the attackers be prosecuted. Her example emboldened civil rights leaders who followed, including fearless bus riders like Rosa Parks and Claudette Colvin. The Mirabal sisters were assassinated in 1960 for their protests against Dominican strongman Rafael Trujillo. Dolores Huerta co-founded the United Farm Workers union and conceived the boycott that became the model for a movement. Marsha P. Johnson helped lead the fight for LGBT rights, Judith Heumann for disability rights. As individuals, as activists, they took substantial personal risks; as models, they showed people whose stories weren’t being told and whose lives weren’t being valued that dignity is not the monopoly of the dominant.

Among these women are those whose contributions are infinitely more recognizable than they themselves ever were. To this day, educators struggle to close the confidence gap that discourages girls from going into science; Melinda Gates has made this a core of her mission. Would it be any easier if more people knew the stories, grasped the possibilities represented by women like Rosalind Franklin, whose role in the identification of the DNA double helix was eclipsed by Watson and Crick; or Grace Hopper, the mathematician/Navy admiral/computer wizard; or Tu Youyou, who worked on a cure for malaria; or Françoise Barré-Sinoussi, who helped discover the retrovirus that came to be known as AIDS? Hollywood has started to color in some of those empty spaces, greenlighting movies about women like American spy Virginia Hall. But particularly in science, “if you can’t see it, you can’t be it,” so these are stories whose illumination is long overdue.

Finally, there are women who exercised moral leadership, doing hard things against all self-interest. Margaret Chase Smith staring down Joe McCarthy; or Anna Walentynowicz organizing her fellow shipyard workers in communist Poland; Wangari Maathai, fighting for both Kenya’s land and its democracy, reminding people everywhere that invisible people who do the right thing can change … everything.

If power is a muscle, driving progress through strength, influence is a magnet, drawing people toward possibilities they might otherwise never have imagined. The women profiled here enlarged their world and explored new ones, broke free of convention and constraint, welcomed into community the lost and left behind. They were the different drummers, to whose beat a century marched without always even knowing it. So this special project is an act of discovery, and rediscovery, of the possibilities that come when we look and listen differently to the world these women made.

Gibbs, a former editor-in-chief at TIME, is the director of Harvard Kennedy School’s Shorenstein Center 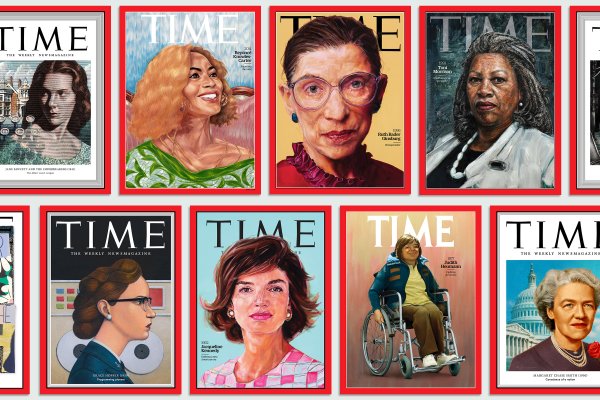 Behind the Scenes of TIME's 100 Women of the Year Issue
Next Up: Editor's Pick