View of a suffrage march on Fifth Avenue, off Broadway and 23rd street, in New York City, 1912.
Getty Images
By Ellen Carol DuBois

When the woman suffrage movement first began in the mid-19th century, its champions had all become human-rights activists in the searing fires of the abolitionist movement. In 1838, Angelina Grimké, renegade daughter of South Carolina slave owners, laid down the basics of women’s rights, in her book, Letters to Catherine Beecher: “Whatever it is morally right for a man to do, it is morally right for a woman to do. I recognize no rights but human rights.”

In the aftermath of Civil War, emancipation and the constitutional enfranchisement of African American men, this expansive alliance on behalf of human rights tragically faltered. Enraged at the exclusion of women from enfranchisement in the 15th Amendment, Elizabeth Cady Stanton insisted that, if political rights were not to be accorded to all citizens, then educated women, descendants of the Founding Fathers, should take precedence. Betraying her underlying elitism, she wrote in the women’s rights periodical The Revolution, in December 1868, “If woman find it hard to bear the oppressive laws of a few Saxon Fathers, of the best orders of manhood, what may she not be called to endure when all the lower orders, native and foreigners, Dutch, Irish, Chinese and African, legislate for her and her daughters?”

From that point on, for the next 50 years, the major suffrage organizations and their most prominent leaders were white, middle-class women and their arguments rested on the allegedly lofty characteristics of women-as-women rather than on universal human rights. Yet by the turn of the century, national woman suffrage had still not been secured, and political realities were making the constitutional enfranchisement of women a distant dream.

The demand for woman suffrage could not succeed unless it came from a mass movement, reflecting the voices of a diverse and large portion of the nation’s women. Luckily for the generations of American women who followed, even during the frustrating decades when the previous, exclusionary formulation ruled, American suffragism had grown far beyond its origins.

Certainly, once one looks past the top tiers of national suffrage leadership, the suffrage movement was not uniformly white. The determined, eager suffragism of African American women is impressive. The battle that had been fought to win — and increasingly to protect — the voting rights of African American men had affected them deeply. As early as 1874, African American activist Mary Ann Shadd Cary presented her case, as recorded in the official record of the U.S. House of Representatives Judiciary Committee: “The colored women of this country though heretofore silent, in great measure upon the question of the right to vote … have neither been indifferent to their own just claims… nor to their demand for political representation.”

By the late 19th century, just two generations out of slavery, and despite Jim Crow-era racist violence and segregation, many more African American women were realizing that political rights were crucial to their ability to protect their communities and to advance themselves as women. “If white American women, with all their natural and acquired advantages, need the ballot,” explained, Adele Hunt Logan of Alabama, in the pages of the Colored American Magazine in 1905, “… how much more do Black Americans, male and female need the strong defense of the vote to help secure them their right to life, liberty and the pursuit of happiness?” At the national level, the southern-controlled Democratic Party was totally closed to African Americans. However, at the state level in the North and West, wherever African Americans had standing in local Republican parties, black women were well organized and politically sophisticated participants in the battle for the vote.

Nor was the movement solely the realm of wealthy, educated women. In the early 20th century, white immigrant working-class women also turned to the suffrage movement in great numbers. Working in factories, joining trade unions, moving freely through major cities, they helped to turn 20th century woman suffragism into a mass movement. First and second-generation Italian, Irish and Eastern European Jewish women were especially prominent in the ranks of the great suffrage parades of the 1910s in New York City; Chicago; San Francisco; Washington, D.C. and elsewhere.

Inspired by the spirit of Progressive Era social change, aware of new protective labor and housing laws, these working-class women recognized the importance of making their own political presence felt and influencing how these laws would be shaped and enforced. In researching my new book, Suffrage: Women’s Long Battle for the Vote, I discovered this forceful 1907 statement by a British-born garment worker speaking before the New York legislature: “Gentlemen, we need every help in the battle of life …. To be left out by the State just sets up a prejudice against us. Bosses think and women come to think themselves that they don’t count for so much as men.”

The most famous women’s labor event of these years, the Triangle Shirtwaist Strike of 1910-1911, highlighted the importance of working-class women’s suffrage activism. New York City garment workers wore suffrage pins when they picketed their factories and noted that, if they had the right to vote, police would not be so quick to harass and arrest them. The famous heroine of the strike, garment worker Clara Lemlich, issued this challenge to New York legislatures: “We are here Senators. We are 800,000 strong in New York State alone.” The name of the organization behind the pamphlet that circulated her words is telling: the Wage Earners Suffrage League.

In the final years of the suffrage movement, this power of this unprecedented mass movement was clear. Though sometimes separated in their own organizations, black and white, rich and poor women were unified by their common exclusion from the political affairs of the nation. When the U.S. Constitution was finally amended to prohibit states from political discrimination on the grounds of “sex,” all celebrated their victory. Speaking before the final convention of the National American Woman Suffrage Association in 1920, its leader, Carrie Chapman Catt, declared that “the suffragists of this country in the last half century, more than any other group of people in this land, have kept the flying flag of the principles of the Declaration of Independence, the principles of the constitution, and have held them before the people of this country.”

However, looking back at the victory of the suffrage movement in her 1933 book, Women in the Twentieth Century, sociologist Sophonsiba Breckenridge insightfully observed that, much like at the end of the World War, the “demobilization” that began after 1920 was followed by “the development of a diversification of aims and interest among and between those who had been united in the attack upon a common enemy.”

As women of different politics, races and classes sought to make use of their new voting power, their differences reemerged. Many of those divisions are still an important factor in American politics a century later — but they have been overcome before, and may be again. After all, the history of woman suffrage is not yet over.

Ellen Carol DuBois is the author of Suffrage: Women’s Long Battle for the Vote, available Feb. 25 from Simon & Schuster. 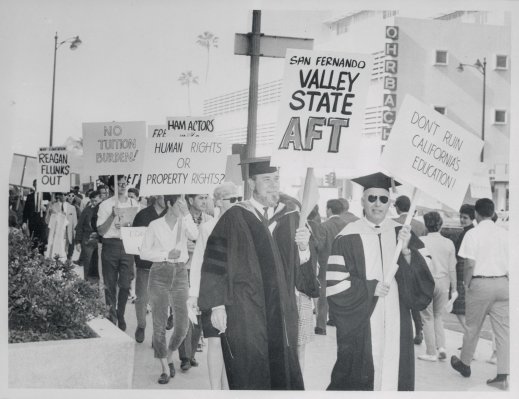 'Free College' in Historical Perspective
Next Up: Editor's Pick