We Designed 100 New Covers for TIME's Women of the Year Project. Here Are the Stories Behind Them

To mark the role of the 100 Women of the Year in history, we embarked on something historic of our own: creating a TIME cover to recognize each of them.

From charcoal portraits to a three-dimensional paper sculpture, from photo collages to fine-art paintings, from wooden sculptures to a quilted fabric image, the art we commissioned reflects the breadth of the 100 choices. Regardless of style, our aim was to find compelling pairings of artist and subject.

The project selected a woman or group to represent each year from 1920 to 2019, and our visual approach follows the same arc by re-creating TIME’s cover design as it evolved over the past century—from the illustrative scroll of the 1920s to the iconic red border of today. Each cover is visually emblematic of the period its subject ­represents.

In all, we commissioned 49 original portraits. These are the stories behind some of them.

New York–based fine artist Toyin Ojih Odutola chose to portray Beyoncé Knowles-Carter in a Nigerian-inspired dress shirt and a honey-colored bob. “What I arrived at in my final drawing was a portrayal of a woman completely comfortable in her space while curious for what was to come in her future endeavors,” says Odutola. “I hoped to express and retain the joy and wonder in her, the magnitude of her influence, and to illustrate how she did then as she continues to do so now: by inspiring us all to follow our creative inclinations yet never lose sight of ourselves.”

Mickalene Thomas, a contemporary Brooklyn artist best known for her depictions of African­-American women, created a layered image of LGBTQ-rights pioneer Marsha P. Johnson, our 1969 choice. “Collaging allows me to contemplate the processes around building an identity, a sense of self,” Thomas says. “This work first and foremost celebrates her as a person that radiated self-pride, vivacity, glamour and fearlessness, but also recognizes her legacy as a face of resistance.”

Shana Wilson’s 40-inch by 30-inch oil painting of Supreme Court Justice Ruth Bader Ginsburg in 1996 was a labor of love. “I elected to paint Ruth without robes, ‘just’ as a woman, to showcase all of her achievements. She’s also a daughter, wife, mother, grandmother, friend and mentor,” says Wilson, who also painted First Lady Jacqueline Kennedy for our 1962 cover.

“Her steely gaze conveys professional success yet the approachable tilt of her head, few loose strands of hair, and ruffled blouse portray femininity,” adds Wilson, who studied the early 1990 TIME covers for graphic direction and palette.

Artist Bisa Butler with her artwork on Feb. 24, 2020 at TIME studios.
Sangsuk Sylvia Kang for TIME

The vibrant image of Wangari Maathai, the 2001 choice, was created by American fiber artist Bisa Butler, who used African Dutch-wax cottons, silk, and velvet quilted and appliquéd for her portrait of the Green Belt Movement founder and winner of the 2004 Nobel Peace Prize.

“I have admired her from afar for years,” says Butler, who has an upcoming show at the Art Institute of Chicago. “This whole experience brought me closer to her legacy and closer to my own purpose.”

To create a new image of Diana, Princess of Wales—who has graced TIME’s cover 11 times—we turned to paper-sculpture artist Yulia Brodskaya. Using just paper and glue, Brodskaya created an incredibly complex portrait, providing a new way of seeing one of the most-photographed women of that time. “My main vision for Princess Diana’s portrait was simply to fill it with light,” says the U.K.-based artist, who spent two weeks producing the artwork for our 1987 cover. “I remember every paper strip I picked, folded and glued down, but I can’t grasp how – despite the roughness, texture and schematic quality of it – a paper-strip portrait is still capable of conveying emotions and a person’s likeness.”

For 1920, the Spanish-born graphite and charcoal artist Amaya Gurpide rendered a cover illustration of five women known as suffragists. Gurpide captured the feel of TIME’s very first cover in 1923—a charcoal illustration by artist William Oberhardt of then-Speaker of the House Joseph Cannon.

Jennifer Dionisio, a London-based illustrator, created a portrait of pioneering physicist Chien-Shiung Wu for 1945. Its style syncs with what is considered the golden age of TIME’s illustrated cover, a period dominated by Boris Artzybasheff, Ernest Hamlin Baker and Boris Chaliapin. Known as the ABCs, the three artists illustrated more than 900 TIME covers over three decades.

To capture Rosa Parks, Claudette Colvin, Mary Louise Smith and ­Aurelia Browder, who initiated the Montgomery bus boycott in 1955, we turned to Philadelphia artist Lavett Ballard. Ballard, whose work ­focuses on “themes of history, colorism and Afro-­futurism,” illustrated the campaign of peaceful resistance on a painted collage applied to reclaimed wood fences.

“The use of fences,” says Ballard, “is a symbolic reference to how fences keep people in and out, just as racial and gender identities can do the same socially.”

Other artists who created TIME covers for this project include:

Buy the cover art→
Painting by Lauren Crazybull for TIME

Lauren Crazybull, a Blackfoot, Dene visual artist based in Alberta, Canada, painted a portrait of Wilma Mankiller, the first female Principal Chief of the Cherokee Nation and our 1985 pick.

Scratchboard artist Mark Summers, whose work is most remembered as the visual look of Barnes and Noble — and who also illustrated 16 stamps for the U.S. Postal Service — utilized his signature technique for his portrait of Jane Fawcett and the Codebreakers, the 1941 cover.

Vietnamese artist and oil painter Cuong Nguyen, who was accepted to Saigon’s Academy of Art while still in high school, painted a striking portrait of Indian politician Amrit Kaur for the 1947 cover.

Canadian-born artist and illustrator Anita Kunz, the first woman (and first Canadian) to produce a solo exhibit of her work at the Library of Congress in Washington, D.C., illustrated American screenwriter Irna Phillips, who pioneered the American soap opera.

Our cover of American computer scientist and U.S. Navy rear admiral Grace Hopper, the 1959 choice, was created by German-born artist Mark Burkhardt. Burkhardt, whose work is reminiscent of Northern Renaissance painting, has clients and collectors worldwide.

Buy the cover art→
Illustration by Bijou Karman for TIME; Paul U. Unschuld

We commissioned L.A.-based artist Bijou Karmen to create our 1979 cover. Karmen, best-known for gaining the attention of Rihanna for a series the artist produced for the singer’s clothing line, painted a portrait of Chinese chemist Tu Youyou.

Buy the cover art→
Illustration by Agata Nowicka for TIME

Warsaw-based illustrator Agata Nowicka, considered one of Poland’s best known editorial illustrators, created our portrait of Anna Walentynowicz, the Polish free trade union activist and co-founder of Solidarity, who is acknowledged for 1980.

For a portrait of Anita Hill, who testified before Congress in 1991 about the sexual harassment she said she received from Supreme Court nominee Clarence Thomas, we turned to 20-year-old freelance artist Alexis Franklin, whose day job is filming and editing videos at a church in Texas.

The striking portrait of American novelist Toni Morrison, the 1993 cover, was created by Canadian artist Tim Okamura. His combined style of realism and graffiti of African American subjects has earned him worldwide attention; his work has been featured in several major films and at the National Portrait Gallery in London.

Buy the cover art→
Illustration by Lu Cong for TIME

Brooklyn artist Tim O’Brien, who has painted more than 30 TIME covers over the past 30 years including several award-winning illustrations of President Donald Trump, illustrated the 2006 cover of former Liberian president Ellen Sirleaf Johnson.

Buy the cover art→
Illustration by Molly Crabapple for TIME

New York artist-journalist Molly Crabapple, whose work takes her to the frontlines of conflicts in the U.S., Syria, Turkey, Iraq and Lebanon, created the striking portrait of the Black Lives Matter founders, the 2013 cover. Crabapple was named one of TIME’s Next Generation Leaders in 2016. 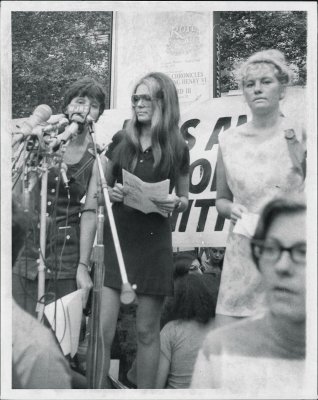 50 Years Ago, Gloria Steinem Wrote an Essay for TIME About Her Hopes for Women’s Futures. Here’s What She'd Add Today
Next Up: Editor's Pick