For the last several months, Haley Stevens and Lauren Underwood have been sending each other lots of emojis. As first-time women candidates running in Michigan and Illinois, they were part of a surge of new Congressional candidates aiming to flip GOP-held seats in crucial swing districts.

But as young women running to serve in a Congress where they were far outnumbered by older men, they were also just trying to keep each other going.

“Enjoy the feeling, because you DID IT!!” Underwood texted Stevens after she won her August primary (she also reminded her to clear her voicemail because it would fill up quickly.) “Keep fighting. Keep going. We are going to change the world!” Stevens texted Underwood last month.

They’ll join a record 25 Democratic women who are heading to Congress for the first time after Tuesday night, helping Democrats take the House of Representatives even as the party lost key Senate and governors’ races.

Read More: A Record Number of Women Were Elected to the House by a Wide Margin

Some of the big wins for Democrats on Tuesday were experienced leaders, like Michigan’s Gov.-elect Gretchen Whitmer, who led the Democrats in the state Senate, or Kansas’s Gov.-elect Laura Kelly, who has served in the Kansas state Senate since 2005.

But many of the toughest House races were won by women who were taking their first foray into electoral politics. Sharice Davids, who won a House seat in a conservative Kansas district, is an openly gay Native American lawyer with a background in mixed martial arts fighting. Cindy Axne, a small business owner, was one of two women to win a House seat in Iowa. Abigail Spanberger, a former CIA analyst, ousted Tea Party Republican Dave Brat in Virginia.

In the two years since Hillary Clinton’s defeat, something remarkable has happened in American politics. The day after Trump’s inauguration, millions surged into the streets to protest his agenda at the Women’s March, generally considered the biggest single-day protest in American history. Soon after that, many of those women formed local Indivisible groups aimed at using Tea Party-style tactics to pressure their local representatives. Months later, as a GOP legislature attempted to repeal the ACA, women activists made hundreds of thousands of phone calls to their representatives and confronted them at angry town halls. By early 2018, more than 42,000 women had reached out to Emily’s List about running for office, and 356 women Democrats filed paperwork to run for Congress (120 Republican women filed to run). By Tuesday, 183 women Democrats were on the ballot for the House of Representatives.

“Here, a story like mine is possible,” says Underwood. “A regular middle-class woman working full‑time is able to figure out how to get on the ballot, walk around, knock on doors, get signatures and ends up winning an election.”

“That story is not possible in every country,” Underwood says. “It’s possible here.”

But the transformation extends far beyond just the women who chose to run for office. Thousands of women have upended their lives over the last two years join the army of organizers devoted to changing politics and electing Democrats in the midterms. Women led the opposition to the GOP plan to kill the ACA. Women founded most of the thousands of Indivisible groups around the country, and roughly 70% of Indivisible activists are women. In Georgia, domestic workers organized by Care In Action contacted more than 500,000 voters and sent nearly 1.5 million text messages in support of Stacey Abrams for Governor — 90% of those activists were women.

“This is a victory that’s driven not by Washington but by a nationwide local grassroots movement led by woman,” says Leah Greenberg, co-founder of Indivisible. “Women, and occasionally men, who tried to explain to their children how the bully could have gotten elected.”

And it’s a mobilization that could lead to a Democratic majority that is more responsive to women’s concerns. Women make up roughly a third of the Democratic caucus, so they’ll have a more powerful voice in the majority than Republicans had when they controlled the House, according to Debbie Walsh, director of the Center for American Women and Politics at Rutgers University. And even though a Republican Senate means that women Democrats in the House are unlikely to pass any major legislation, “I think the women will be better positioned from the perspective of stopping bad things from happening,” says Walsh.

“Having extra women in these institutions makes just a little bit more cultural change in how things are done,” says Stephanie Schriock, president of Emily’s List, which works to elect pro-choice women Democrats. “Women get more bills passed, their bills have more cosponsorships than their male counterparts, women in general are more progressive.”

Stevens addressed supporters Tuesday night after spending most of the night playing Scrabble with her mother as returns poured in.

“We just elected the first woman to Congress in Michigan’s 11th district,” she said to massive applause in a hotel ballroom in Birmingham, MI. “I am the daughter of a fabulous mother,” she said. “And make no mistake about it, we are the defenders of our democracy.” 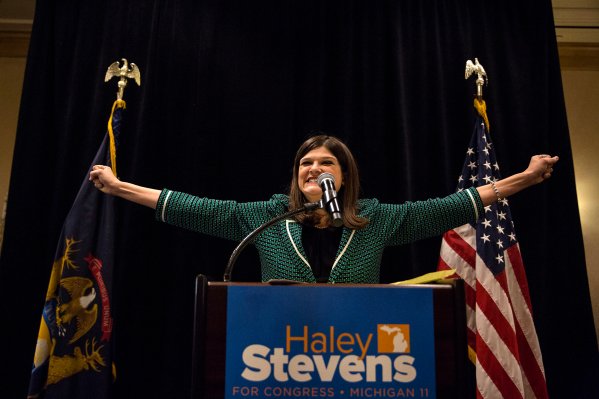 A Record Number of Women Were Elected to the House by a Wide Margin
Next Up: Editor's Pick