“Sí, se puede.” We hear it at protests and see it written on signs at marches, and it became the rallying cry of Obama supporters during his 2008 presidential campaign. A chant of unity and strength, it has been embraced by many social movements that have brought American democracy closer to its promise. It signifies the movement for economic justice and farmworker dignity that Dolores Huerta began in the 1960s, before many who chant her words today were even alive.

Born in New Mexico in 1930, Huerta was raised by a farmworker and union-activist father, and a mother who welcomed farmworkers into her hotel at reduced rates. Her parents’ values seeded Huerta’s career in activism: as a young elementary-school teacher, she saw her students come to class hungry and in need of shoes, and decided she could help them best by organizing their farmworker families. By age 32, she co-founded the National Farm Workers Association with Cesar Chavez. And in 1965, she led a grapeworkers’ strike in California that turned into a successful nationwide consumer boycott of grapes and resulted in better pay, benefits and protections for thousands of workers.

Huerta launched the slogan “Sí, se puede” (“Yes, we can”) amid farmworker protests in Arizona in 1972 as a demonstration of her belief in the individual and collective power of workers. For female workers in particular, her role was transformative. At a time when less than 40% of women were in the workforce, Huerta insisted that they have an equal voice at work and in unions, elevated low-wage workers in the women’s movement and mentored young female activists across the country. To Huerta, women are never powerless victims, only leaders and authors of their own stories.

We have been learning from Huerta for decades. She saw a need to address working poverty at its root, and remains one of our nation’s greatest labor leaders. When we see injustice, may we all seek to organize power, as Huerta did, and may we do so with her unstoppable strength and determination.—Ai-jen Poo

Poo is the director of the National Domestic Workers Alliance 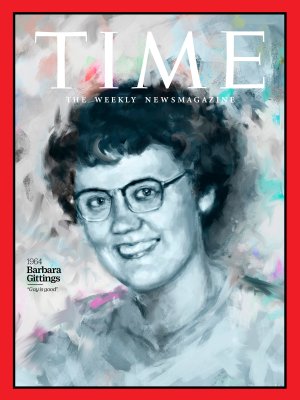 1964: Barbara Gittings
Next Up: Editor's Pick