Pop Culture Is Finally Getting Over the Girlboss Heroine. What Comes Next?

Physical, a new black-comedy series from Apple TV+, chronicles the rise of a ’60s radical turned ’80s workout-video queen. No, it’s not a biography of Jane Fonda. The show’s fictional protagonist, Sheila Rubin, is a far less endearing character. Played with gritted-teeth intensity by Rose Byrne, she’s a frustrated San Diego housewife with a Berkeley degree, a young daughter, an eating disorder and a relentlessly critical inner monologue. When her husband Danny (Superstore‘s Rory Scovel), a philandering hippie academic, loses his job and proposes using their savings to fund a state assembly campaign, she panics. The problem is, she’s already spent that money on furtive, ritualistic binge-and-purge sessions whose secrecy she ensures by checking into a local motel.

Instead of coming clean, she discovers an aerobics gym at the mall, operated by a bleach-blonde, Spandex-clad speed freak named Bunny (British actor Della Saba). When it comes to group exercise, it’s love at first step-touch. Despite Bunny’s rightful mistrust, Sheila starts teaching classes in an attempt to replenish the Rubins’ savings. Eventually, she gets the idea to shoot a workout video. And the deeper she gets into aerobics, the less she seems to need her binges.

Death of the girlboss — capitalist feminism has dominated the modern era. Is the culture ready to move on?
Photograph by Elizabeth Renstrom

This sounds like a redemption arc—and it might well have formed the basis for one, say, half a decade ago, when Shonda Rhimes dominated ABC Thursday nights with hit dramas about glamorous, powerful women who’ve done awful things. But it isn’t. Yes, Physical, which premieres June 18, is the story of an unhappy woman who finds her calling. It’s also the story of a spiteful person who lies, cheats, steals and worse to achieve selfish ends. (In one telling scene, Sheila informs her old dance teacher of her new gig. “I didn’t know you liked people enough to do that,” the woman says.) At times, it seems as though Sheila has begun to develop some empathy. Yet whenever she’s forced decide between her own success and doing right by someone else (usually another woman) she chooses herself.

Although it’s set four decades in the past and works best as an allegory for how baby-boomer flower children grew up to be hypercapitalist yuppies, Physical also feels like a sign of our transitioning times. In the pre-Trump 2010s, as the economy slowly recovered from the Great Recession, a suspiciously corporate strain of feminism—one predicated on the financial success of individual women—dominated pop culture. This was the era of what we now, often pejoratively, call the girlboss: an unabashedly dominant, unapologetically feminine woman defined by boundless ambition, for whom glorious ends often justified ugly means. The archetype was aspirational; even if she harmed other women in the course of her quest for self-actualization, the girlboss’ triumphs were understood to be a credit to all of womankind.

But much has changed in years bracketed by presidential elections and capped with a pandemic. A young generation that’s more critical of capitalism and empowerment feminism has turned girlboss into a joke, a meme, something hopelessly cheugy—to use Gen Z’s term for passé. Movies and TV have begun to reflect that trend, questioning the use of feminism to justify greed, exploitation, narcissism. Physical is part of this shift, with characters ranging from the monstrous Sheila to the mutually supportive all-girl skate crew in HBO’s Betty replacing the two-dimensional girlboss ideal to create a fuller picture of female power.

“Maybe girlboss is a new word for feminism,” entrepreneur Sophia Amoruso, who popularized the term with her 2014 memoir #Girlboss, mused in an Elle interview about the book. In fact, the roots of para-feminist girlbossery run much deeper. Sheila Rubin’s real ’80s counterparts—think Working Girl, shoulder pads, Madonna—were proto-girlbosses, as were the power-brunching Sex and the City types who emerged at the turn of the millennium.

But it wasn’t until roughly a decade later that the girlboss truly took over pop culture. Millennial women steeped in the multimedia monolith of the Harry Potter franchise entered the workplace with its fantasy-world girlboss character, Hermione Granger, as a role model. Sheryl Sandberg acolytes leaned in, Beyoncé performed “Run the World (Girls)” in front of giant LED lights that spelled out FEMINIST at the VMAs and Hillary Clinton super-fans donned NASTY WOMAN T-shirts, while dozens of so-called ladyblogs sprang up to offer color commentary. Ruth Bader Ginsburg, repackaged as the Notorious R.B.G., became a brand. A new cohort of pop-star businesswomen—Beyoncé, but also Taylor Swift, Rihanna, Nicki Minaj, Lady Gaga—raised on the cautionary tales of Amy Winehouse and Britney Spears peddled female empowerment. On the big screen, girls could be astronauts (Gravity) or action heroes (Mad Max: Fury Road) or Star Wars stars; more controversially, they could excel as deadly CIA operatives like Jessica Chastain’s character in Kathryn Bigelow’s Zero Dark Thirty.

It was Rhimes’ work that most embodied the trend on TV, leveling up from the striving surgeons of Grey’s Anatomy to Scandal’s cutthroat White House fixer Olivia Pope (Kerry Washington) and the imperious law professor Annalise Keating (Viola Davis) in How to Get Away With Murder. But by the mid-2010s, viewers were stanning girlbosses in every genre, from Parks and Recreation’s idealistic bureaucrat Leslie Knope—a character that evolved after the comedy’s shaky first season to be more likable—to Game of Thrones’ very own colonizer Khaleesi, Daenerys Targaryen. Reality soap stars like Real Housewives’ Bethenny Frankel and those enterprising Kardashians girlbossed their way to the top of lucrative fashion, beauty and lifestyle brands that promised to help fans achieve those women’s high-maintenance good looks—and, in turn, helped launch the proudly materialistic influencer economy. Even Broad City did its part for the girlboss cause, with Ilana Glazer and Abbi Jacobson’s slacker alter egos squealing their way through a guest appearance from candidate Clinton.

Then Hillary lost and #MeToo came for Harvey Weinstein, a major donor to Clinton and other Dems, clearing up any confusion over who still ran the world (predatory boys). Meanwhile, a number of highly visible “SheEO” types fell from grace. Amoruso left her fast-fashion brand Nasty Gal after it went bankrupt. Miki Agrawal, who founded body-positive period-underwear empire Thinx, faced allegations of sexual harassment (which she denied; the parties later settled). Ivanka Trump’s political career became a constant reminder that it was possible to be a girlboss without demonstrating any real feminist values. And as the archetype wavered, its pop-culture avatars got weird. Vanity Fair anointed a short-lived adaptation of #Girlboss, which followed an obnoxious but ostensibly cool young Sophia, “Netflix’s first truly terrible show.” Hulu extended the story line of Margaret Atwood’s antifeminist dystopia The Handmaid’s Tale by remaking its enslaved heroine as a quippy caricature.

While the death of the girlboss has been pronounced every few months for years, it might’ve taken the nightmare that was 2020 to finally bury her mythos, as a pandemic that disproportionately took women out of the workforce made the precariousness of gains made by even relatively rich, college-educated women impossible to ignore. At the same time, a sort of slow-moving, post-#MeToo reckoning came for powerful bosses who presided over hostile workplaces. Amid the usual litany of male names, some strong female leaders, like Ellen DeGeneres and Audrey Gelman, who founded women’s social club and co-working space the Wing, got called out and announced their exits. (Others, such as Anna Wintour, got called out and closed ranks.) “We’re still sold a dazzlingly unrealistic image of a superwoman—or in 2020, a girlboss,” Gelman had said, in Fast Company, months earlier.

It can be hard to talk about what’s wrong with the girlboss, real or fictional, as an aspirational ideal without seeming to scold women for embodying traits we traditionally associate with men. I suspect that’s a feature, not a bug, for those who benefit from the conflation of women’s empowerment with their own success, regardless of whether that success is predicated on the misery of other women. But art isn’t just about morality; it’s also about imagination, novelty, nuance and diversity in the broadest sense of the word. Among other complaints, the primacy of the girlboss—with so many characters falling on the spectrum from full-fledged girlboss to, like the Broad City leads, girlboss wannabe—made for some boring years in pop-culture feminism.

So it’s been gratifying, recently (with notable exceptions) to see scripts that chip away at the girlboss facade. Before Physical’s Sheila there was Succession’s exasperating Shiv Roy, she of the great pantsuits and the moral flexibility to use her progressive cred as leverage with her right-wing media titan dad. Mrs. America contrasted 1970s feminists working together to improve all women’s lives with the lonely scheming of one girlboss (Cate Blanchett’s Phyllis Schlafly) who picked a fight with them as a path to conservative stardom. For all its flaws, Best Picture nominee Promising Young Woman dismantled many tired empowerment tropes, from the rape-revenge narrative to the female superhero who is stronger, faster and more heroic than any human male. In reality, systemic oppression is tenacious. A mortal woman who takes on the patriarchy—even one of exceptional abilities, like Carey Mulligan’s super-intelligent character—is likely to destroy herself in the process.

Not that all post-girlboss stories about female power have been, or should be, pessimistic. They just aren’t so obsessed with individual achievement as the only path to fulfillment. Some of the best recent shows and movies with a feminist slant explore the bonds between women who thrive in collaborating and caring for each other. Greta Gerwig’s Little Women reiterated the timelessness of Louisa May Alcott’s novel about sisters who are the center of each other’s universes. The skater girls of Betty unite to hold space in a male-dominated scene. In Peacock’s We Are Lady Parts, anxious Amina Hussain (Anjana Vasan) is compelled to become the perfect student and wife before finding a more authentic self while playing in a punk band with other Muslim women. Though they compete onstage, the trans women of Pose and the sex workers of P-Valley are each other’s lifelines in a world that so often marginalizes them.

We’ve reached a point at which it should be possible to discuss pop culture’s depictions of women as more than a binary of positive or negative. In the case of the girlboss, what we saw, for years, were stubbornly positive representations of characters that, in fact, possessed many destructive traits. What’s emerging to take their place aren’t all feel-good stories; the characters aren’t all aspirational figures. And that’s the point. For every Olivia Pope striding through the halls of power like she owns them, there is a Sheila Rubin screwing over her business partners to make a buck and an Amina Hussain detouring from a traditional path to success to find herself in the company of other women. We’ll know pop culture is tilting toward equality when its portraits of every conceivable type of woman look less like propaganda and more like honesty. 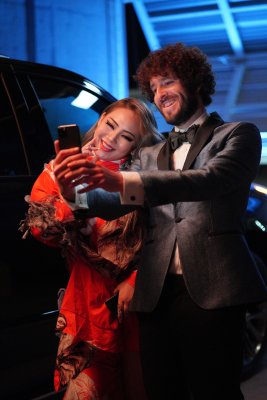 Lil Dicky Delivers a Hilarious K-Pop Episode of 'Dave'
Next Up: Editor's Pick