Promising Young Woman Starts with a Cathartic Blast. Then It Gets Bogged Down With Cynicism

Promising Young Woman kicks off with a vengeance-colored-nail-polish punch: a bunch of businessguys at a noisy bar—one of them played by the preternaturally elfin Adam Brody—grumble about a woman coworker who has complained about unfair treatment. Then one of them notices a stunning-looking young stranger—Carey Mulligan—sprawled on a nearby banquette, apparently drunk out of her mind. Her black skirt, part of a business suit, isn’t short at all, but she’s too out of it to sense that it’s bunching up around her thighs. The young men ogle her, and marvel at how easy it would be to take advantage—what they want to do and what they know they shouldn’t do are exactly the same thing.

One of them—the one played by Brody—steps forward and gallantly offers to accompany the woman to her door; her slurry response has gratitude in it. But as the two ride along in a cab, the seemingly courtly elf man gets an idea: mightn’t the slurry woman like to stop by his place for a drink? She mumbles something like agreement, maybe. Once they’ve arrived at his pad, he pours her a full tumbler of pinky-orange liquid. The next thing you know, he’s putting the moves on her in his bedroom, ignoring her mumbled protests. And the next thing you know, this would-be victim is striding down the early-morning street, fully in control of her faculties, toting her high-heeled work shoes in one hand as she takes ravenous bites from a paper-wrapped hamburger held in the other. Her hair’s a mess, her limbs are streaked with blood, and there’s a ball-busting steeliness in her eyes. Something happened in that bedroom all right, but you know she’s the one who scored.

Read more: Pop Culture Reckoned With #MeToo in Radical New Ways in 2020—Even as It Receded From Headlines

That’s an exhilarating blastoff, and even the movie’s clever title card—with its clear nods to blunt exploitation cheapies of the ’70s and ’80s—is a good kick in the pants, a promise of cathartic gratification to come. Women fighting back against rape, violence, and heinous men who walk away from their crimes unpunished? Hell, yes. But after that knockout opening, Promising Young Woman—which was written and directed by Emerald Fennell, a writer, actor and producer who’s also the showrunner behind Killing Eve—shifts direction and tone, becoming a lot less compelling and far more sermonizing. In that sense, it also becomes paradoxically more heavy-handed and less original in its expressions of anger than many of the old-school revenge-fantasy movies that used to be considered junk. I’m thinking, specifically, of Abel Ferrara’s righteously furious Ms .45, from 1981, in which an astonishing young actor named Zoë Lund plays a woman who wreaks vengeful violence on mankind—with the emphasis on man—after she’s brutally raped twice in one day. Ms .45 has a dangerous, hungry energy, thanks largely to Lund. It knocks the wind out of you even before it makes you think—though it does makes you think, too, especially about the tensile fierceness of refusing victimhood.

Promising Young Woman works very hard at making us think, and all that effort drags at its potential power. The story’s multiple intricacies are traced out with care. Mulligan’s thirtyish character, Cassie, has dropped out of medical school and is living at home with her parents (somewhat thankless roles inhabited by Clancy Brown and Jennifer Coolidge). She works in a coffee shop and favors fuzzy sweaters in cotton-candy colors. (The movie, shot by Benjamin Kracun, does makes good use of that sugar-rush palette.) By day, she muddles through in a depressive fugue, for reasons the movie will make clear later. By night, she trades her nice-girl duds for glitter and gloss and skimpy going-out clothes. This is her hunting gear. She’s so angry at men—and not without reason—that she takes pleasure in dressing to seduce, playing at being drunk and then luring them to their doom (the specifics of which we never see). Yet her scheme is rattled when she meets pediatric surgeon Ryan (played by the angelically boyish Bo Burnham), a guy who really does seem to be genuinely conscientious and good. Is it true that no man can be trusted? Maybe this one is the exception.

Promising Young Woman ostensibly explores complex ideas, though it really only cuts the simplest path through them. The movie strives to make important points about consent, or lack thereof, and about academia’s leniency toward male students accused of rape and assault. If you’re paying even just the smallest bit of attention, you’ll get the message. And Mulligan, a gifted actor, does her best to make this a story about a human being in pain, rather than just one big teachable moment. She plays Cassie as a woman who’s been robbed of joy, leaving a smudged patina of exhaustion and distrust behind.

Yet there’s only so much Mulligan can do here, and the movie’s early focus on cleansing revenge ultimately takes a backseat to dime-store psychology and utilitarian pathos. Cassie’s motivation is sincere but also unfocused. She finds men who seem perhaps OK and then coaxes out their worst impulses to prove to herself, and to us, that all men are terrible. Even if you believe that to be so, Cassie’s doggedness is an exhausting and not particularly deep conceit for a film. The movie’s conclusion—not only are men just as bad as you always thought they were, they’re worse—is the easy one to reach, not the hard one. And in one sequence, Cassie even lures a teenage girl into her car for what looks to be a nefarious purpose. Fennell resolves the episode in a jaunty way—not even the angry, distressed Cassie would go that far—but the scene still leaves an ugly metallic taste, flirting with the idea that it’s OK to throw innocent women under the bus, as long as the goal is to properly punish bad men.

All of this is a reminder that full-on, not entirely tasteful pulp is often better at chipping away at our emotional defenses than hip, artfully concocted movies are. Which is to say that it’s possible to be pro-revenge-fantasy and still be anti-Promising Young Woman. Sometimes it’s not what a movie is about that matters; it’s how it’s about what it’s about. This is lip-gloss misanthropy packaged as feminist manifesto, clever but not smart, cynical without being perceptive or particularly passionate. Women are angry for good reason. They also deserve better movies than this one. 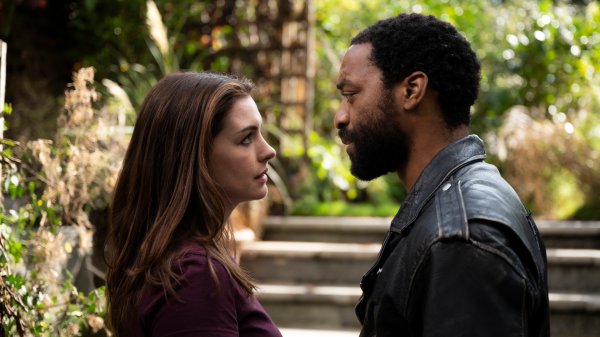 We Could Use a Pandemic-Era Romantic Comedy, But Locked Down Isn't It
Next Up: Editor's Pick