In retrospect, it probably wasn’t the best idea for Jane Fonda to appear as one of the first guests on NBC’s Megyn Kelly Today last fall. Fresh off the politics beat, Kelly was still getting a feel for light morning-show chitchat when she asked the actress about her plastic surgery. Fonda blinked in disbelief: “We really want to talk about that now?” The moment was classic Jane Fonda: Instead of chatting about her face when she’d been invited to discuss her latest film, the Oscar winner let Kelly, the studio audience and viewers across America all witness her genuine reaction. Then 79, Fonda seemed entirely comfortable showing off the candor she’d spent decades cultivating in the public eye.

Though it’s shaped by her relationships with four famous men—her father, Hollywood legend Henry Fonda, and three ex-husbands: filmmaker Roger Vadim, activist Tom Hayden and media mogul Ted Turner—the real through-line in Jane Fonda in Five Acts is this same bracing honesty. Directed and produced by American Masters creator Susan Lacy, the 133-minute documentary, which will air Sept. 24 on HBO, takes its time excavating Fonda’s life. There is, of course, a lot of ground to cover: Famous since birth, she evolved from a wholesome girl-next-door type into a sex symbol, a polarizing dissident and then the doyenne of exercise. In the 21st century, Fonda’s persona combines all of these identities, and only one word seems to sum up her place in the culture: icon.

Lacy unearths a trove of fascinating archival footage from every era of this remarkable life and wrings insightful commentary out of the story’s most important supporting characters, including Hayden (who died in 2016), Turner, Redford and Fonda’s equally plain-spoken pal Lily Tomlin. But what the film’s leisurely pace really does is make ample space for Fonda’s unvarnished reflections. Rather than linger on her achievements and scandals, which are already well documented in the annals of cinema and celebrity gossip, Lacy’s interviews provide a glimpse of what it’s like to actually be a person as legendary and complicated as Jane Fonda.

At first glance, it might seem diminishing to structure a documentary about a talented, accomplished woman—especially one who vocally identifies as a feminist—around the men in her life. But it allows Lacy to trace her subject’s slow evolution from a product of patriarchy into an independent human being. Growing up in the spotlight, Fonda survived her mother’s suicide and craved the approval of her critical, often absent father. Those rarely discussed experiences shaped the person she became. Lacy is patient with the central story of Jane, her mentally ill mother and her first child, Vanessa Vadim, allowing it to spill from one act into the next, guided by the star’s hard-won epiphanies about how her sad upbringing poisoned her earliest attempts at motherhood.

Although it also goes on to address all of the obligatory controversies, from Barbarella to Hanoi Jane, Five Acts is more interested in what Fonda has gleaned from 80 years of immersion in radical ideas and intense relationships—and the approach only works because of her openness. For Fonda, each of her parents is a reflection of the best and worst parts of herself; every marriage represents both an education and a reinvention, a stop on her path to discovering an authentic self. When “Act Five: Jane” finally flashes across the screen, the movie’s triumphant denouement feels earned.

As seen through Lacy’s compassionate lens, the Jane Fonda who lays bare her life in Five Acts is introspective and affable, confident yet forthcoming about her flaws and failures, earnest in her devotion to her various causes but also wickedly funny when she wants to be. (On Vadim: “He didn’t speak very good English. Maybe if he had I never would’ve married him.”) Such candor is hard to find in biographical documentaries, let alone ones about Hollywood stars. In fact, Fonda’s honesty even extends to a brief word about plastic surgery. But do we really wanna talk about that now? 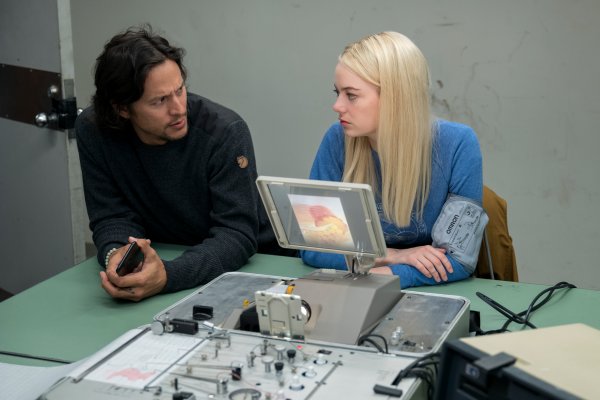 Cary Fukunaga on Why the Rubik's Cube and Don Quixote Are the Keys to Maniac
Next Up: Editor's Pick