For any band formed outside a boardroom, the disastrous first gig is a rite of passage. KISS debuted to an audience of fewer than 10 in Queens. The Velvet Underground regaled an incredulous New Jersey high school with their classic song “Heroin.” And in a new comedy series from Peacock, a fictional London punk act called Lady Parts takes the stage for the first time in a neighborhood pub filled with Union Jacks and jeering white guys. “Your husband let you out the house tonight, did he?” one man cracks when the all-female, all-Muslim quartet takes the stage. They launch into a noisy but triumphant rendition of Dolly Parton’s “9 to 5,” trading looks of pure, astonished joy as the crowd remains bemused.

The scene has infectious energy. Yet what’s remarkable about it is that although it takes place two-thirds of the way through We Are Lady Parts’ electrifying premiere season, it constitutes the show’s first substantive depiction of misogyny and Islamophobia. That’s not to say that the five young women at the center of this show live in some untroubled fantasy-land, or that they don’t struggle over how to navigate their hybrid identities. But creator Nida Manzoor, who wrote and directed the entire six-episode season, understands that it’s possible to tell a culturally specific story without reducing the experiences of so many discrete characters to a constant confrontation with politicized adversity.

Like most young adults, the members of Lady Parts are busy forming relationships, carving out careers and just generally deciding what it is they want out of life. Saira (Sarah Kameela Impey), the band’s brash front woman, works a day job at a halal butcher’s shop and grapples over whether committing to a boyfriend would mean sacrificing her radical ideals. Bassist Bisma (Faith Omole), the only mother of the bunch, draws a comic about “a group of women who all become homicidal maniacs when they’re on their period.” When she’s not pounding drums, surly Ayesha (Juliette Motamed) drives an Uber, blasting metal to drown out rude customers. Rumored to wear a face covering because she’s in hiding, Type A manager Momtaz (Lucie Shorthouse) hypes up the band using skills learned hawking lingerie.

They find an unlikely lead guitarist in the show’s protagonist, Amina (Anjana Vasan), a timid microbiology grad student who’s dutifully pursuing an arranged marriage but can’t seem to make a good impression. A combination of propriety and vomit-inducing stage fright has always kept her from going public with the virtuosic guitar chops she learned by emulating folkie heroes like Don McLean. But, in a frantic attempt to keep pace with her seemingly perfect, newly engaged bestie Noor (Aiysha Hart), she agrees to join Lady Parts for an audition in exchange for a setup with Ayesha’s hot brother Ahsan (Zaqi Ismail). The arrangement is supposed to be temporary. Yet the experience of playing punk songs with other Muslim women reveals how much she has in common with these misfits—namely, a thirst for rebellion and an untapped reservoir of rage.

Cross-cultural comedy has been a staple of primetime ever since the Jeffersons moved into the Bunkers’ neighborhood. Recent examples include Fresh Off the Boat, Ramy and Peacock’s own Rutherford Falls. Even Chuck Lorre, the human sitcom factory who spent decades churning out overwhelmingly white hits from Roseanne to Two and a Half Men to The Big Bang Theory, has recently pivoted to stories of culture clash. Bob Hearts Abishola traces the love affair between a white sock magnate and his Nigerian-born nurse; United States of Al brings an Afghan interpreter to live with his Marine buddy.

Shows like Lorre’s have evolved enough, over the years, to avoid simply exoticizing everyone who isn’t white, Christian or born in the West. Instead, the recurring joke is that white Americans and their immigrant and minority neighbors find each other’s customs equally perplexing. This represents some measure of progress. But it also flattens characters on both sides of any given cultural divide into mere representatives of their majority or marginalized identities.

There is a lot to love about We Are Lady Parts. The dialogue is sharp and funny (“You guys are serving up a real feminist power that has me actually dead,” gushes a trendy influencer). Vasan’s performance is endearingly vulnerable. There are trippy animations, clever pop-culture homages, catchy original songs with titles like “Bashir With the Good Beard.” Rarer is the way Manzoor lets the characters speak for themselves, declining to explain their feminism, or their religious beliefs, or their headscarves or lack thereof to viewers used to being spoon-fed such information. They don’t come to their first gig looking to shatter stereotypes or teach drunk white dudes a lesson in tolerance. Like KISS and VU before them, Lady Parts are here to rock. 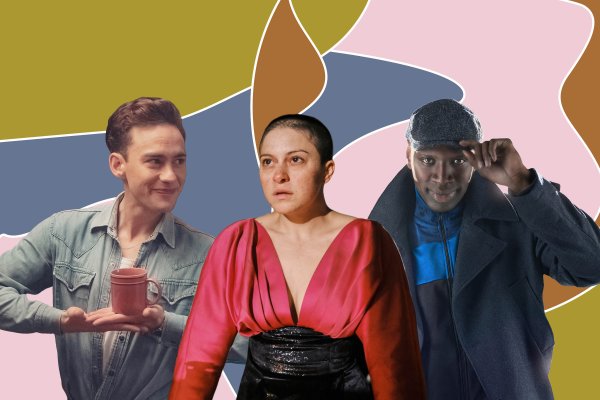