Pose Was More Than Just a TV Show. It Changed the Culture, Onscreen and Off

Weddings may be a staple of TV series wrapping up their runs, but the medium had never seen one quite like the showstopper FX’s Pose staged for Sunday’s penultimate episode. Exchanging vows was golden couple Angel—a sex worker turned model played by Indya Moore—and Lil Papi (Angel Bismark Curiel), who, in managing her career, found a calling of his own. Following the death of Papi’s ex, Angel suddenly had the life so many of her trans sisters dreamed of: not just the glamorous career, but also the adoring husband and a cute stepson to raise alongside him. The day wasn’t just about them, though; it was about the whole ballroom community. Thanks to the largesse of phone-sex mogul Elektra (Dominique Jackson) and her mobster business partners, every trans woman got to attend in the wedding gown of her dreams.

Like all of the show’s greatest set pieces, it was a stunning fusion of high artifice and deeply felt emotion. I sobbed all the way through the ceremony, and the tears—happy, sad, just generally verklempt—kept flowing as I screened the two-hour finale that will air on June 6. Pose has never been pristine prestige television; co-creator Ryan Murphy is too fond of spectacle and of melodrama and of using characters to painstakingly articulate big ideas for that. Rushed, overstuffed and plagued by plot holes, this year’s third and final season was easily its weakest. Yet for all its cringey lines, this series about queer men and trans women of color forming chosen families within New York’s ’80s and ’90s ball culture never stopped hitting me hard in the heart. Besides, Pose’s legacy reaches far beyond the revolutionary story it’s been telling, to the very center of pop culture.

It certainly wasn’t the first show to feature realistic, humane depictions of trans characters. Netflix’s Orange Is the New Black launched the career of Laverne Cox and exposed the plight of incarcerated trans people; Amazon’s Transparent took a broader approach to gender and sexuality, but one that was undermined by the choice to cast a cisgender man, who was later accused of abuse, as the trans heroine. The Wachowskis’ cult sci-fi hit Sense8 introduced a major trans character (Nomi Marks) played by a trans performer (Jamie Clayton) and created by a pair of trans writer-directors. And reality TV churned out flattering profiles like I Am Jazz and Caitlyn Jenner’s I Am Cait. In the second half of its 12-year run, RuPaul’s Drag Race has increasingly—and often infuriatingly—addressed the complex relationship between drag and gender identity. The big screen was a mixed bag of groundbreaking indies (Tangerine, Laurence Anyways) and bland studio efforts, like Dallas Buyers Club and The Danish Girl, that enlisted famous cis men to play trans women in what appeared to be shameless awards bait.

Pose expanded the palette immensely, placing several very different Black and Latinx trans characters—all played by trans actors—at the center of its story, and thereby obliterating the binary of “positive” vs. “negative” representation. If Angel was the Chosen One, destined to soar above a painful past, and Elektra was the imperious, ambitious, often cutthroat survivor, then Mj Rodriguez’s Blanca was the hero, a fundamentally generous, nurturing soul who lived to care for the handful of queer and trans street kids who called her “Mother.” Snarky best friends Lulu (Hailie Sahar) and Candy (Angelica Ross) could be harder to love, though a Season 2 story line that culminated in Candy’s murder also helped to explain why each woman developed such a hard, self-protective shell. (Thankfully, on Pose, a character’s death rarely meant their disappearance from the show. Ghosts inhabited every corner of its AIDS-stricken ’80s and ’90s New York.)

Though each character got some time in the spotlight and many individual actors delivered astonishing performances—including Billy Porter, whose portrayal of the gay male ball-scene eminence Pray Tell won him an Emmy in 2019—Pose was ultimately a celebration of community. A deeper, if fictionalized, dive into the same world that Jennie Livingston documented in the 1990 film Paris Is Burning, the show was unflinching in its depiction of the threats that subculture has faced: violence, addiction, body issues, HIV/AIDS, employment discrimination, the perils that can accompany sex work, food and housing insecurity. But it also lavishly recreated the moments of ecstasy they conjured together at DIY parties more fantastical than anything you’d find at the most exclusive Manhattan nightclub. In three seasons that spanned a full decade, we watched these characters lean on each other. Estranged (or worse) from blood relatives who repeatedly let them down, they created in Blanca’s love-filled House of Evangelista their own ideal family.

That community spilled over from the set into the cast and crew’s activism, their public appearances, their relationships with a still-thriving ball culture and, perhaps most influentially, their careers beyond the show. The show’s fashion-forward stars became the highlight of every red carpet, with Porter making a particular splash in everything from capes and gowns to angel wings and (in a gesture of pro-choice solidarity) a suit shaped like a uterus. In May, he came out as HIV-positive with a Hollywood Reporter cover story in which he called Pose “an opportunity to work through the shame [of HIV] and where I have gotten to in this moment.” The show’s cultural politics are more sophisticated than those of the era it’s set in; along with critiquing Madonna’s “Vogue” period, creators Murphy, Brad Falchuk and Steven Canals avoided such appropriation by hiring ballroom legends like Jose Xtravaganza and Leiomy Maldonado as cast members and consultants. Pose, in turn, brought visibility to the community’s present-day struggles. When Layleen Polanco, a young trans woman from the House of Xtravaganza, died in prison, Moore, Ross and Janet Mock showed up at a demonstration to demand answers.

Now that Pose is coming to an end, there’s reason to believe that its legacy of centering queer and trans people of color in popular entertainment will continue. Rodriguez is gearing up to star opposite Maya Rudolph in an Apple TV+ comedy from Parks and Rec vets Alan Yang and Matt Hubbard. Jackson appeared earlier this year on Starz’s American Gods, perfectly cast as one Ms. World. Moore is building a film career, with roles in Queen & Slim and July’s Escape Room sequel. Ross has entered Murphy’s infinite American Horror Story universe. Sahar has a role on Freeform’s The Fosters spin-off, Good Trouble. And Porter is popping up everywhere, from Taylor Swift videos to last month’s That Damn Michael Che to the upcoming Cinderella remake where he’ll play a “genderless” Fairy Godmother. In 2019, Mock—the author and activist who worked as a writer, producer and director of Pose—joined Murphy at Netflix, becoming the first trans woman with an overall studio deal. The volume and variety of these projects is thrilling.

Even more encouraging is the way Pose’s influence has rippled throughout the industry. Ball culture has become pop culture, in reality competitions like HBO Max’s Legendary and films like the just-released Port Authority. That movie’s star, Leyna Bloom, who also played a role on the final season of Pose, will also appear this summer as the first Black and first Asian openly trans woman in a Sports Illustrated Swimsuit Issue. In the years since Pose’s 2018 debut, we’ve seen more and more trans actors—Hunter Schafer, Patti Harrison, Brian Michael Smith, Josie Totah, Eve Lindley, Leo Sheng, Logan Rozos—in complex, specific roles that neither avoid nor fixate on their characters’ gender identity.

Of course, one show could never entirely fix an entertainment industry that still too often stereotypes queer and nonwhite characters, and one whose earnest efforts at trans inclusion began less than a decade ago. There is still plenty of work to be done when it comes to intersectional depictions of the LGBTQ community in pop culture; the need for more trans creators with broad platforms and more stories about trans men is real. But to the extent that Hollywood is finally learning that trans people—and trans communities—contain multitudes, Pose deserves much of the credit. 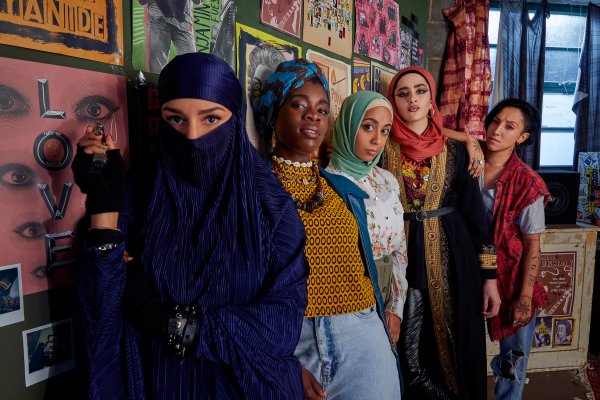 Peacock's All-Girl Muslim Punk Band Comedy We Are Lady Parts Is a Rockin' Good Time
Next Up: Editor's Pick