My kids didn’t have school the day after Donald Trump won the presidential election and eventually, near noon, they came into my room to see what was wrong with me. Perhaps they’d come to me at their father’s prompting. Perhaps they’d heard me weeping. They’d never seen me this way before. Inconsolable.

“Hillary didn’t lose!” I insisted, as they sat on the bed around me, even as Hillary’s voice drifted into the room — her concession speech, on the radio downstairs, my husband shouting up, “Honey, you should come listen to this!”

I would not listen. I would never listen. The sound of Hillary Clinton conceding to Donald Trump is what compelled me to rise at last, if only to shut my bedroom door.

“I know,” said my daughter with real sorrow in her voice.

“Is Trump going to ruin our lives?” asked my son, with real worry. Hillary Clinton wasn’t, to them, a distant and unknown figure. They’d met her six months before, when I’d been invited to introduce her at an event in San Francisco. We’d flown there from Portland for the occasion. My husband and kids and I got to hang out with Hillary in a room backstage before the event began. When my son asked Hillary what she thought of Donald Trump, she didn’t answer. She turned the question around and instead asked him what he thought of Donald Trump.

“I think he’s very disrespectful,” he said. “I agree with you about that,” she replied.

His disrespect was the reason I’d repeatedly assured my children in the months leading up to the election that Donald Trump could not win. He slandered Muslims and immigrants and those of Mexican heritage. He referred to women as pigs and dogs. He repeatedly criticized the grieving parents of a young soldier who’d been killed in the line of duty. He mocked a disabled man in front of cameras and denied having done so. He failed to disavow the white supremacists who campaigned for him. He cheated those he’d employed out of money. He bragged about not paying his taxes. He laughed when his supporters threatened journalists with violence. He said he could grab women “by the pussy” if he felt like it because he was a “star.” He did and said so many horrible things I couldn’t any longer keep a list in my head.

He had no shame. He had no grace. He had no dignity. He had no moral code. Never mind whether you were conservative or liberal, Republican or Democrat, with the evidence mounting by the day, it seemed apparent to me — and many — that Trump was characterologically unfit for the office. Countless members of his own party, both prominent and not, abandoned him in droves. They announced they could not vote for a man who had so little respect — for others, for the bounds of decorum, for the rule of law, for the office of the presidency, for the fundamental principles of American democracy itself. Many of them didn’t much care for Hillary or her political views, but they loathed Trump so deeply, they’d vote for her instead. Newspapers that had never in their history endorsed a Democratic candidate for president did. Among the few who endorsed Trump, one was The Crusader, the official newspaper of the Ku Klux Klan.

Week by week through the late summer and autumn, my certainty that he could not win deepened. I knew the American electorate was divided politically, but I also knew something else: for all our flaws, we were not a people who’d choose a man to be our president who was so plainly, so essentially, so completely, a disrespectful brute.

The fact of my wrongness felt like a blunt-force blow. I wasn’t naive. I’d long known there were misogynists and racists and people who voted against their own economic interests. I knew that some people voted out of their fear and rage and ignorance, but I didn’t know how deep and wide it was in America until November 9, 2016. I believed we, as a people, were better than we turned out to be.

On that day after the election, after I finally pulled myself out of bed, I walked around in a state of numb shock. My numbness was interrupted only by two extremes of emotion: more jags of crying — this can’t be true! — and an ever-heightening state of outrage — she won by nearly three million votes!

In this manic zombie/teary/rager dream state, I somehow managed to go to the grocery store, where I managed to figure out what to make for dinner and then, at home, made it. All through this managing, a memory kept floating into my mind of a conversation I’d had with my maternal grandfather when I was eleven or so and I’d asked him who he planned to vote for in a political race in his city of Huntsville, Alabama — for what office, I do not recall. We were in the car, him at the wheel, me in the front passenger seat. Moments before I asked my question, we’d driven past a campaign sign that caught my eye because emblazoned on it was the name of a woman, a fairly rare occurrence in 1979.

My grandfather replied he hadn’t yet decided who he’d be voting for but he knew for certain it would not be the woman. When I asked why, he told me it was because women were not qualified to lead and therefore should not hold elected office. He did not say this unkindly. He didn’t become defensive or angry when I vehemently disagreed with him. He only chuckled and explained I’d someday understand that there are certain things men are better at than women, and making important decisions was one of them.

I admired my grandfather and I loved him, too. He was a good man in that way men get to be thought of as good even though they do not believe in the basic human rights of women and girls. Around the time that he told me he would not be voting for the woman because she was a woman, he’d also observed over lunch one day what a shame it was that I was the one who’d “gotten the brains” among my siblings and my brother (according to him) had not. Why was it a shame? Because my alleged brains would only be “wasted” on me since I was a girl.

But of course it wasn’t only my grandfather who thought this way. By the time I argued with him in the front seat of the car about the political race in his town, by the time I was told my intelligence was a useless asset, I was well aware that he was not alone in his opinion that women were inherently inferior to men. I knew that in arguing with him, I was arguing with the entire culture — one that had told me what I could not and should not and would not be because I was a girl.

I get asked a lot in interviews when I first became a feminist and why, and though my answer has remained the same since the election, the way I feel about it has changed. I’ve been a feminist since my earliest understanding that what it means to be female is to be limited by society in ways that males are not. And though I’ve never been under the illusion that sexism had vanished, before Trump was elected there was a history-lesson element to the stories I told of my first consciousness about what it meant to be female in America, a quality that had made the sexism I experienced as a girl seem antiquated and nearly extinct. The message was: This is the way it used to be! Isn’t that amazing? In witnessing the presidential race and Trump’s eventual win, I’ve concluded that I had it wrong. This isn’t how it used to be. It is the way it is. It amazes me still.

Perhaps that’s the reason I felt Hillary’s loss on a physical level — like someone had actually delivered a blow to my body — and perhaps, too, it’s the reason that long-ago conversation with my grandfather came circling repeatedly into my mind the day after the election. Hillary Clinton’s victory would’ve in some measure healed the lifelong wounds that patriarchy has made on my heart. When people accused me of “voting with my vagina,” I laughed. I was proud to do it. President Hillary Clinton would’ve been repudiation, finally, of all those people who’d said women were not fit to lead (or vote or be doctors or write great books or . . . well, you fill in the blank). Her defeat was personal to me. This election wasn’t simply a political contest. It was a referendum on how much America still hates women.

I never have listened to her concession speech and I probably never will. I didn’t watch because I’ve already seen it: the woman who works fifty times harder than the man who got the job. It isn’t a story I don’t know. I’ve heard she was strong and dignified and inspiring. I’ve heard she rose to the humiliating occasion with astounding grace. None of that surprises me. Hillary Clinton grew up in the world I grew up in, only in one that was even harder for girls and women because she’s a generation older. She — like so many whose very humanity has been questioned because of race or sexuality or gender identity or physical ability — has had to make her way forward steeped in a culture that usually told her no. One that said: We will punish you if you try and we will applaud when you fail. And did.

In San Francisco, when I was introducing Hillary before a thousand or so people six months before the election, the line that got the biggest applause was this: “Hillary Clinton made the world ready for Hillary Clinton.” It was the line she thanked me for specifically when she walked onstage and we embraced while the audience went wild. “No one has ever said that about me,” she said into my ear. “Thank you.”

Excerpted from the book Nasty Women: Feminism, Resistance, and Revolution in Trump’s America, edited by Samhita Mukhopadhyay and Kate Harding. Reprinted with permission of Picador. 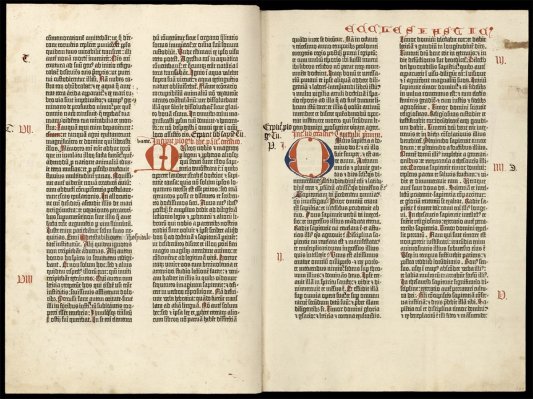 The Gutenberg Bible Comes With Reading Instructions
Next Up: Editor's Pick