With Labor Day in the rearview, it’s that time again, when nervous students are typically assembling their coolest new outfits, crowding into freshly painted hallways and finding their places in the cafeteria-table hierarchy. But 2020 is no typical year. As COVID-19 continues to devastate communities across the U.S., some kids are starting the school year from home, others have seen their first days delayed and still others have, perhaps ill-advisedly, been ushered back into classrooms that pose unprecedented risks. Is high school even worth the effort if you can’t get within six feet of your classmates?

It’s enough to make any student (or adult regressing back to adolescent behaviors in quarantine, no judgment) long for a dose of teenage normalcy. Thankfully, there’s plenty on offer via our most convenient portal to the Before Time: television. So it seems like a good time to count down the medium’s all-time greatest teen dramas. These are series that transcend their generations and settings, capturing something timeless and universal about the experience of growing up. And they’ve distinguished themselves from so many other big names in the genre—Gossip GIrl, Riverdale, Pretty Little Liars and the massively influential Beverly Hills, 90210 among them—by remaining vital throughout their runs, however long or short, rather than jumping the shark after a few strong seasons. Even better, the vast majority of them are available to stream.

Degrassi has been a staple of Canadian childhoods since 1979, having generated four decades’ worth of programming that can seem kind of overwhelming for anyone who didn’t grow up with it. The franchise began as four specials from former Toronto public-school teacher Linda Schuyler that evolved into a show called The Kids of Degrassi Street, which then begat Degrassi Junior High and Degrassi High. A decade after the latter series wrapped, in 1991, came the best installment of all—Degrassi: The Next Generation. At 14 seasons, it’s also by far the longest. While a few adult characters carry over from the ’80s, viewers who start with TNG shouldn’t find it hard to get into the warmhearted and progressive new story.

Less glossy and frivolous than many of its U.S. contemporaries (see: the 90210 extended universe), Degrassi never fully strayed from the after-school special path, with real teen actors playing teen characters and lightly didactic story lines tackling such issues as abortion, suicide, rape and substance abuse. Dip into early episodes for vintage turn-of-the-millennium internet anxiety and the presence of a young Aubrey Graham—now better known as Drake. Starting in season 10, with the student cast fully refreshed and an updated slate of topics including a Peabody-winning episode focused on a transgender teen, the series feels significantly more modern. Should you require even more Degrassi, the four-season Gen Z reboot Degrassi: Next Class is available on Netflix.

Stream it for free on: Pluto TV or YouTube

Father-and-son creators Bryan Elsley and Jamie Brittain let teens write their own drama for youth-focused UK network E4, and the unsurprising result is some of the angstiest, horniest, druggiest stuff ever committed to video. Rotating through three casts in six seasons (the skippable seventh revisits a few fan-favorite characters as adults), the show follows students in the years leading up to their university entrance exams. It can get pretty melodramatic, but you don’t have to be 17 to find the emotional intensity of the story lines exhilarating. No wonder Skins made such an effective showcase for the talents of a young cast that included Dev Patel, Nicholas Hoult, Kaya Scodelario and Game of Thrones standouts Hannah Murray and Joe Dempsie. Sadly, the American version that ran for a single season on MTV wasn’t nearly as strong.

What does it take to become Netflix’s most-binged original series, as On My Block was in its debut season? The recipe goes something like this: recruit a diverse cast of charismatic young actors, place their characters on the precipice of their freshman year of high school, season with equal parts sweetness and grit, then pour the resulting mixture into a believable facsimile of an East Los Angeles neighborhood. It all cooks up into a dramedy that’s sensitive to the realities of growing up in a place where gangs, drugs and mass incarceration are facts of life, without robbing the brainy clique at the show’s center of their youthful innocence. Sierra Capri holds it all together as the singular Monsé Finnie, a tomboy coming of age in all-male milieu.

Stream it on: Netflix

After decades of perfect-looking mean girls and “ugly ducklings” who transformed into knockouts the moment they put a comb through their hair, teen TV got serious about inclusion in the 2010s. Along with diverse casts and characters from across the LGBTQ spectrum, a few shows even made room for female protagonists who weren’t rich, didn’t look like supermodels and sometimes struggled with mental health. E4’s ’90s-set My Mad Fat Diary, adapted from author Rae Earl’s teenage journals, is a gorgeous example. Fresh out of an institution after attempting suicide, Sharon Rooney’s working-class Rae loves Britpop and boys but hates her big body. Bonus: Killing Eve breakout Jodie Comer has a supporting role as Rae’s best friend.

The quintessential Gen X teen drama—emphasis on drama—was over almost as soon as it began. But in just 19 episodes, creator Winnie Holzman (thirtysomething) captured the particular experience of growing up in the early ’90s, when youth culture was leaning into fashionable messiness, resulting in an explosion of oversized flannel, alternative rock, third-wave feminism and experimentation with drugs and boxed hair dye. In easily parodied but genuinely moving voice-over monologues, pensive, moody, romantic Angela Chase (Claire Danes, in the first of so many great cry-face performances) gave voice to a new type of teen—one who ran around with soft boys and bad girls, mooned over long-haired burnouts and brooded in bed blasting the Cranberries but still loved her annoying family. Groundbreaking in its sympathetic depiction of a queer teen (Wilson Cruz’s Rickie), My So-Called Life is also notable, in retrospect, as one of the last artifacts of pre-Internet adolescence.

Stream it for free on: IMDb TV and ABC. com

Peak TV never stops churning out teen shows, and with good reason. It’s only by winning over young viewers, after all, that new platforms can expect to sustain themselves for decades to come. A lot of these shows are (or were) fantastic: Dare Me, Never Have I Ever, Sex Education, In My Skin, The Society, The End of F***ing World, Betty, PEN15, the recent Party of Five reboot. OWN’s Peabody-winning David Makes Man, a lyrical drama from Tarell Alvin McCraney (Moonlight) about a gifted 14-year-old Black boy (newcomer Akili McDowell, transcendent) who lives with his single mom and little brother in the South Florida projects, is the very best of this impressive bunch. With his future riding on his academic performance, his family struggling to make ends meet and local gang members determined to recruit him, David is under an immense amount of pressure. Yet McCraney also makes space in this beautifully shot story to revel in the joy, fantasy, friendship and fun endemic to youth. Instead of insisting that David must escape his neighborhood to thrive, he honors the community striving and sacrificing around him.

Stream it on: HBO Max

So ahead of its time that last year’s Hulu revival felt like a no-brainer, neo-noir dramedy Veronica Mars chronicles the adventures of a precocious California teen (the irresistible Kristen Bell) who banters with her disgraced, former-sheriff dad (Enrico Colantoni); searches for the mother who more or less abandoned her; solves crimes at her economically polarized high school; and struggles to heal from her own rape and the murder of her best friend. It’s a heavy backstory. But Bell, in her first starring role, keeps Veronica charming and quippy while still honoring the trauma that has defined her life.

Creator Paul Feig and executive producer Judd Apatow greeted the turn of the millennium with this one-season wonder set at the dawn of the ’80s, which was simply too good for network primetime. Into a teen-TV landscape populated by jocks, mean girls and coastal rich kids came the middle-class, suburban-Detroit Weir family: angsty sophomore Lindsay (Linda Cardellini), her nerdy freshman brother Sam (John Francis Daley) and their embarrassingly square parents (Becky Ann Baker and Joe Flaherty). Equal parts rude comedy and poignant drama, the show displayed little curiosity about the top of the McKinley High social heap. And while Sam and his naive, geeky friends provided the kind of goofy laughs Apatow and Feig would bring to the big screen a few years later, Lindsay was the show’s true masterpiece—a smart, sardonic teenage girl with a wild side and zero interest in being crowned prom queen. Despite its short run, Freaks and Geeks had an indelible influence on the more diverse, idiosyncratic teen programming of the 21st century. It also featured one of the strongest young casts ever assembled, surrounding the wonderful Cardellini with Seth Rogen, James Franco, Busy Philipps, Martin Starr and Jason Segel—many of whom would go on star in Apatow’s blockbuster movies.

High school can seem like a carefree time from the distance of a few decades. But when you’re living it, with hormones coursing through your veins and every fiber of your youthful being yearning to break free from parental control, every day is a battle with monsters hidden in plain sight. Hence the central metaphor of this instant-classic supernatural teen drama, which made creator Joss Whedon a household name. Adapted from the fun, pulpy 1992 movie Whedon scripted about a cheerleader who learns she’s her generation’s Chosen One—the one human in the world endowed with the power to slay vampires—Buffy cast the charming Sarah Michelle Gellar in a more serious but still witty take on the character. With her mentor Giles (Anthony Stewart Head) and gang of misfit friends, including Alyson Hannigan in the pioneering role of lovable lesbian witch Willow, by her side, Buffy spent seven seasons falling for the wrong men, making vampires go poof and learning something new about how to be a person with every kill.

High school football has an outsize presence in small-town Texas: it’s a source of entertainment, local identity, community pride—and, for the boys who spend hours every day honing their skills, a potential ticket out of such often-claustrophobic environs. With high stakes come unique tensions, and they’re navigated with stoic elegance in this wrenching TV adaptation of the 2004 feature film by the principled Coach Eric Taylor (Kyle Chandler) and his bright, empathetic wife, Tami (Connie Britton). Although the Taylors are its core, its conscience and perhaps the all-time best televised representation of a functional marriage, the show gets its urgency from the teenage characters. Players like Jason Street (Scott Porter), a star quarterback struggling to cope with a life-altering injury, and Tim Riggins (Taylor Kitsch), whose Texas good-ol’-boy veneer conceals aimlessness and confusion, are more haunting than hunky. And it was their emotional performances in Friday Night Lights that paved the way to adult careers for such singular young actors as Michael B. Jordan, Jesse Plemons and Jurnee Smollett. You don’t have to enjoy football to fall in love with what is, in my humble opinion, easily one of the best TV shows ever made. All you need is clear eyes, a full heart and a couple dozen boxes of Kleenex.

Stream it on: Hulu or NBC.com 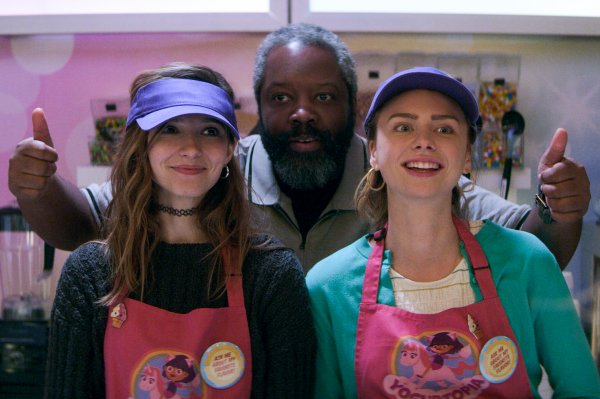 The 6 Best New TV Shows Our Critic Watched in August 2020
Next Up: Editor's Pick