Since she graduated high school, Kayla Stetzel, a 26-year-old law student living in Chicago, hadn’t spent any significant time in her father’s house in Indiana. Then the COVID-19 pandemic hit.

Not wanting to spend months alone in her small city apartment, Stetzel decided to move back in with her father—and inadvertently found herself reliving her adolescence. Her electric guitar and The O.C. DVDs came out of storage. She adopted sleep and eating habits even a teenager would find indulgent. And she found herself studying for law-school exams in the exact same place she did her grade-school homework.

“I’m stressed out about school and playing very angry rock and roll music in my basement,” she says. “It’s very surreal.”

Stetzel isn’t the only person having a teenage rebirth. Waves of 20- and 30-somethings turned back the clock in the early weeks of COVID-19 social distancing by retreating to their childhood homes. And even people who have not physically returned to their old surroundings are turning to nostalgic pastimes to fill the hours. Social media is awash in stories of people rediscovering old interests, from craft projects to long-outdated music, and old-school video games like Animal Crossing and the Sims are surging in Google search trends.

“Whenever we’re in a stressful situation, we tend to regress,” says Lori Gottlieb, a California-based psychotherapist. Just think of how you act when you go home for the holidays, she points out.

But while there are potentially destructive forms of regression, like snapping at your loved ones over a Thanksgiving turkey, it can also be a subconscious form of self-soothing. “Going back to a time in our lives when we felt safe and we felt protected is a natural instinct during these times,” Gottlieb says.

Sarah Solomon, the 31-year-old author of Guac Is Extra But So Am I: The Reluctant Adult’s Handbook, has been turning to an unlikely source for that comfort: the heavy metal music that spoke to her as a teenager, but that she says is now “very against my personal brand” as a Brooks Brothers-wearing adult in New York City. COVID-19 has made Korn and Nine Inch Nails suddenly feel appropriate again, Solomon says.

“We couldn’t go out when we were younger, so I feel like I’m regressing to that point—just raging against being isolated and not allowed to go out,” she says.

Martin Bell, a 33-year-old living with his wife and dog in Georgia, is also turning to old music during COVID-19. He says he’s especially drawn to bands like Bloc Party and the Strokes that he had on heavy rotation in the early 2000s, when he was searching for comfort during another “crisis point,” when “the whole world was turning upside down”: the Sept. 11 attacks.

“The sound of the music can take you back to these feelings that you really didn’t even know were still there,” he says.

Many adults who can telecommute (and do not have responsibilities like child or elder care) are also turning to old pastimes to fill their unprecedented number of unstructured hours at home. That’s the case for Madeline Bilis, a 26-year-old journalist living in New York City.

On a recent weekend, Bilis decided to download the Sims, a game she hadn’t played in more than a decade. “I played for about seven hours without realizing it,” she says. “I blew through lunch somehow, absent-mindedly funneling pretzels into my mouth.” She says the game reminds her of living in her parents’ home as a kid, “the last period when I had time to waste away hours on end.”

Dr. Frances Jensen, chair of the neurology department at the University of Pennsylvania’s Perelman School of Medicine and author of The Teenage Brain, says most of the behaviors we associate with teenagers—like video-game marathons and junk food feasts—relate to impulsivity and a desire for immediate gratification. Adults are displaying these same behaviors during the COVID-19 pandemic, but for different neurological reasons, Jensen says.

Teenagers owe their impulsive nature to their still-developing brains. The frontal lobe, the part of the brain that controls executive functioning, doesn’t fully mature until the mid-20s, Jensen says, making teens more likely to give in to their whims. Adults who are mirroring these behaviors during the pandemic don’t have the same excuse, Jensen says—but stress can do funny things even to developed frontal lobes. “Stress can increase impulsivity, and people are under a lot of stress” right now, Jensen says. “It’s a balance between the executive function parts of your brain and the ‘I want it, I want it, I want it!’ parts of your brain,” which are mainly housed in the limbic system. When you’re under stress, and “your barriers are down,” the limbic system may win out more than normal, giving rise to stereotypically teenage behaviors, she says.

The good news, Gottlieb says, is none of us have fully regressed—the functional adult inside is still there, just waiting to come back out. If you’re moving backward in unhealthy ways, whether by fighting with your family or eschewing all vegetables, Gottlieb says the first step is to notice it’s happening. Then, try to think of how you’d cope with stress under normal circumstances and adapt it to the present day, perhaps by calling a friend or going for a walk. Some newly re-discovered hobbies, like playing an instrument or drawing, are also great stress-relievers, she points out.

“The beauty of adulthood,” Gottlieb says, “is we have much stronger coping skills than we did when we were younger.” 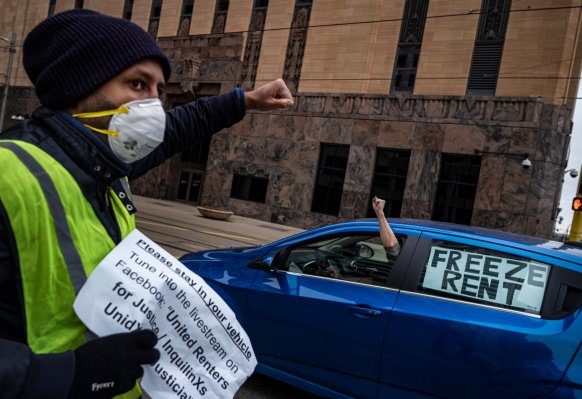 Why Renters Are Being Evicted Despite Moratoriums
Next Up: Editor's Pick