Killing Eve Isn't Your Average Mystery Series. Here’s How It Breaks the Mold

Villanelle sketches pictures of Eve’s hair. She steals Eve’s suitcase and demands that a lover wear Eve’s clothes. She uses Eve’s name as an alias as she flits across Europe, assassinating colonels and moguls in increasingly creative ways.

But Killing Eve quickly subverts the tropes established by a long line of British mystery series. Those shows often hint at sexual tension between the hunter and hunted, usually two men (Sherlock and Moriarty) or a man and woman (Luther and Alice).

Eve and Villanelle’s longing is more explicit. Fleabag creator Phoebe Waller-Bridge adapted Killing Eve from a series of Luke Jennings novellas but aged up Eve from a young upstart to a bored 40-something desk jockey. The change places her firmly in midlife crisis, a stage in a woman’s life rarely seen on TV.

“Eve hits a plateau in her marriage, in her job,” says Oh. “Then Villanelle comes along with her finesse, her style, her lack of inhibition–everything Eve doesn’t have. Villanelle ignites something in Eve.” Eve yearns for Villanelle’s apathy toward the rules. Villanelle admires Eve’s sense of purpose. They want to kill each other. They also fantasize about being each other–or being with each other.

Eve begins to risk the lives of her colleagues and husband just to catch a glimpse of Villanelle. At one point, the agent dreamily describes Villanelle’s honey-colored hair and catlike eyes to a sketch artist. “She’s totally focused, yet almost entirely inaccessible,” Eve muses.

“So is that, like, a square face or an oval face?” the sketch artist asks.

But creator Waller-Bridge is skilled at flipping the script on tired genres. She similarly rethought another cliché–the female “hot mess”–when she wrote the dark comedy Fleabag. On that show, Waller-Bridge starred as a grief-stricken woman who steals from a bad date and declares at a feminist meeting that she would trade five years of her life for the perfect body. Most writers would make a woman like this the butt of a joke. But Waller-Bridge deftly navigates issues like mental illness and guilt. “As an audience member and an actor, I was just screaming for a woman who doesn’t have all the answers,” she says.

Amazon acquired the BBC series, and Waller-Bridge ascended to It girl status: she was cast in the upcoming Star Wars spin-off Solo, and Fleabag was greenlighted for a second season. All along, she was working on the script for Killing Eve. She pored over research on female psychopaths, which she says she found oddly empowering.

Audiences, too, may find themselves cheering for Villanelle when she stabs a lascivious man in the face. Depictions of female power remain so rare that Villanelle’s manipulation of others’ sexist expectations of her can feel heroic.

“We’re familiar with this idea that men would kill someone and not have a care in the world,” Waller-Bridge says. “But Villanelle’s male victims, especially, have this complete meltdown at the idea that she could be a threat to them.”

Though spy thriller Killing Eve may not seem the most obvious follow-up to a comedy lauded for its realism, Waller-Bridge easily makes the leap to drama: Many Fleabag fans thought the main character in that show was also a sociopath. And Waller-Bridge’s favorite kind of joke ends with a sadistic twist. She likes to make her audience feel guilty for laughing. “When people are laughing, they’re vulnerable, they’re open,” she says. “It’s a great opportunity to kick them.”

For Killing Eve, Waller-Bridge and Oh worked together to find a balance between comedy and tragedy, homing in on Eve’s envy of Villanelle. In one scene, Eve flirtatiously asks her husband how he would murder her. “Flatter you to death?” he suggests. She rolls her eyes. “O.K., how would you kill me?” he asks.

“I’d paralyze you with saxotoxin and suffocate you in your sleep,” Eve deadpans. “Chop you into the smallest bits I could manage. Boil you down. Put you in a blender. Take you to work in a flask and flush you down a restaurant toilet.”

Oh delighted in these exchanges. “You so rarely get to be creepy and hilarious at the same time,” she says. The actor never expected to be tapped for the titular role on the show, in part because many fans of the books imagined Eve as white. Oh encountered a similar issue when Shonda Rhimes cast her as Cristina on Grey’s Anatomy, a character that network executives also expected would be played by a white actor.

“Most people assume, unless it’s otherwise specified, that every character on the page is white,” says Oh. “There are certain people who can be open-minded and see beyond that unconscious bias when they’re casting and certain people who can’t. I’ve worked with a lot of the people who can, and they happen to be women and women of color.” When Killing Eve premieres, Oh will become one of just a handful of Asian actors with top billing on a TV series.

Waller-Bridge had been a fan of Oh’s for years, and Oh quickly fell for Waller-Bridge: they share an irreverent sense of humor, and Oh appreciated Waller-Bridge’s impulse to surprise the audience. But Oh wanted to test their in-person chemistry. When they first Skyped, they found they were wearing the same shade of red. When they first met in person, they accidentally wore the same pair of pants. That unconscious creative alignment carried them through the making of Killing Eve. “Committing to a show is like a marriage,” says Oh. “It’s potentially a multiyear relationship. With Phoebe, I thought, I could fall in love with this person.” 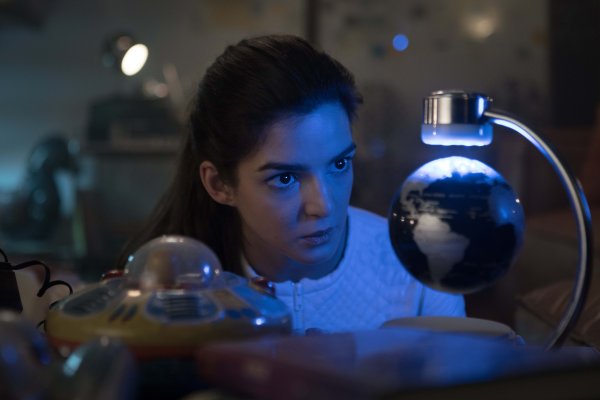 Here's Everything New On Netflix in April 2018 — And What's Leaving
Next Up: Editor's Pick