Michael B. Jordan Is Redefining What It Means to Be a Movie Star

The storefront entrance of the Underground Museum, on a busy street in central Los Angeles, is easy to miss. Inside, it feels like somebody’s stylish home: there are shelves lined with books, framed art and baskets of records. The museum was launched in 2012 with the mission to bring museum-quality art to a community—and neighborhood—that previously had little access to it. Beyoncé has been spotted, John Legend used the space to launch an album, and Barry Jenkins hosted a screening of Moonlight here.

Michael B. Jordan has never been here before, but once he arrives—wearing a blindingly white T-shirt and a friendly grin—he can’t get enough. As we walk around, he pulls out his phone to make a note about one of the exhibits so he can look it up later. He doesn’t exactly fidget, but there’s an anxious energy to him even as he sits still on a bench in the spacious garden. When he wants to make a point, he leans in and looks down, concentrating, wanting to get the words right. “I’m a naturally quiet person,” he says. “Actions speak louder than words.”

For Jordan, it’s easier to inhabit a role than to talk about it. But there’s a lot to discuss when it comes to his next film, Just Mercy, an adaptation of Bryan Stevenson’s best-selling memoir, in which he stars as the activist lawyer. Directed by Destin Daniel Cretton, the movie chronicles the early days of Stevenson’s Equal Justice Initiative, as he defended wrongfully incarcerated death-row inmates. Just Mercy will premiere at the Toronto International Film Festival on Sept. 6 before hitting theaters this December in the thick of awards season. The film, which Jordan also produced, reveals the ways in which law enforcement and the judicial system unfairly target and punish people of color, as brought to life by the true story of Walter McMillian (Jamie Foxx), an inmate set to be executed for a crime he didn’t commit. As Stevenson attempts to clear his name, he uncovers the racist conspiracy that led to McMillan’s wrongful conviction. “It’s a system that preys on people of color, people who are poor, people who are uneducated,” Jordan says. “When you leave this movie, I want you to question what you think is normal.”

Jordan got his start in intimate, character-driven dramas that illuminate stories some viewers might sideline, before he turned to blockbusters. And yet—though Just Mercy’s heroism is expressed through the filing of legal briefs, not heart-pounding action sequences—it’s a continuation of themes that Jordan has worked with before: humanizing the misunderstood, and shining a spotlight on inequality. It’s why Stevenson trusted Jordan with his story. “Films don’t always carry the message of a book in an authentic way, and that was my anxiety,” Stevenson says. “But I felt like he was sensitive to more challenging stories of life in America.” While Jordan says that he didn’t previously have a firm opinion on the death penalty, as a black man in America—and one whose father was active in the Black Panther Party and whose uncle is in the Nation of Islam—he understands how issues like mass incarceration and unjust criminalization affect people. “Bryan dedicated his life to criminal-justice reform,” he says. “I wanted to get behind that story.”

Photograph by Mickalene Thomas for TIME

That’s why Jordan might be our next and last great movie star: he has the box-office bona fides and the leading-man good looks, but his movies, for the most part, all say something, even the popcorn flicks. In a moment where it’s nearly impossible to predict where Hollywood is heading—and who can successfully draw in audiences—Jordan is as close as you can get to a sure thing. For him, this was always the goal. “How you make the most impact is: become the biggest,” he says. “Build your brand so it’s global, so you can attack global issues. Every move matters.”

Like many movie stars before him, Jordan got his start in television. Born in Santa Ana, Calif., and raised in Newark, N.J., he worked as an actor on shows like Parenthood, Friday Night Lights and The Wire, on which he had a small but significant role as the teenage drug dealer Wallace. His performance in Fruitvale Station as Oscar Grant, an unarmed man killed by a Bay Area police officer, brought him wider attention, and marked his first collaboration with director Ryan Coogler. The pair next worked together on a Rocky spin-off, Creed, but with Black Panther, Jordan became a household name. His portrayal of antagonist Erik Killmonger earned him praise for its nuance—he was the rare villain with whom many viewers actually sided. Black Panther is now the 11th highest-grossing movie of all time and the first superhero film ever to earn a Best Picture nomination at the Oscars. (He’ll team up with Coogler again for a dramatization of the true story of how Atlanta high school teachers participated in a standardized-test cheating scandal based on a 2014 article, with a script by Ta-Nehisi Coates.) He’s selective about whom he aligns with professionally: “It was never a money play,” he says. “If I was trying to cash out, I probably would have done more movies.”

He launched a production company, Outlier Society, in 2016, which isn’t unusual for promising young stars like Jordan. But after Frances McDormand gave a viral acceptance speech in 2018 at the Academy Awards, highlighting the importance of “inclusion riders”—a clause that can be requested by actors to ensure a project’s cast and crew meet certain diversity standards—Jordan wanted this to be a part of his mission. When he was being courted by Warner Bros. to sign a deal with his company, he asked that any resulting projects meet this standard. WarnerMedia, the studio’s parent company, which also owns HBO and Turner, ended up working with Jordan and his team to develop a policy to be used across projects company-wide, whether they were associated with him or not. “For me, that was the big first step,” he says. “Hopefully, it’s going to set precedents across the board—other studios, other production companies want to get in on the same wave.” WarnerMedia promised to release an annual report with data about the diversity of its projects, a gesture of transparency in an often opaque industry.

Just Mercy is the first project made under those new directives, and Jordan hopes it highlights the continued need for more inclusion in Hollywood. “Building bridges is cool,” he says. “I was building tunnels for a long time. It’s still going to get you to the other side—you’re just not going to see them moving.” In this way, his strategy was different from other young voices in Hollywood—particularly young black stars like Issa Rae and Lena Waithe—who declared their intentions to disrupt the industry early on. As Jordan has become more outspoken, he wants to collaborate with like-minded colleagues. “What’s the version of it where it’s like, Donald Glover, Issa, myself, Lena, whatever? That hasn’t been a thing yet,” he says. (He laughs when I suggest that he just send a group text.) Yet he knows Hollywood is always looking to justify its risk aversion. “If that’s a movie, it has to be a sure thing,” he says. “Because if it’s not, and that opening weekend isn’t as impressive, it makes it harder for the next one—for everyone involved.”

Jordan is a gentleman: on more than one occasion, he leapt in front of me—really, leapt—to open doors, like he was conscious of a certain type of chivalry, and aware of its effects. But despite his charisma, his bigger aspirations are behind the camera: “I see a world where I’m just directing,” he says. “Or maybe doing a movie once every two or three years.” Yet the next few years will be busy: Without Remorse is out in 2020, and he’ll star in Journal for Jordan, directed by Denzel Washington, who’s emerged as a mentor for him. Like Washington, Jordan wants to be a role model for the next generation. “I’m in these group chats with a lot of different actors and young talent,” Jordan says. “Miles Brown is awesome. Caleb McLaughlin’s on his way up too.”

He knows that the relationships he’s making will have implications not just for his own career, but for the industry as a whole. And with Just Mercy, he’s hoping there’s an impact that reaches far beyond the film’s box-office take. “I want people to feel angry, upset, passionate, sad, inspired and optimistic,” he says, “that you can make a difference.”

The original version of this story misstated Michael B. Jordan’s involvement in the film Just Mercy. He is a producer, not an executive producer. 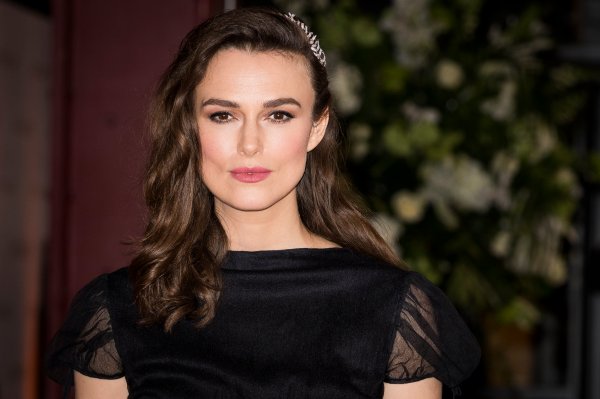 At Long Last, Keira Knightley Gets the Political Thriller She’s Been Waiting For
Next Up: Editor's Pick