When I ask Kyle Chandler if he’ll ever be able to re-create the chemistry he had with his Friday Night Lights co-star Connie Britton on a future show, with a different actress — maybe even his upcoming Netflix drama Bloodline, which premieres March 20 — he answers bluntly.

“I hope so. I mean, we’re just actors. It wasn’t real. I’m just pretending. Come on, kid. Stick with me here,” he says, laughing.

Yes, it’s clear that it wasn’t real. But just barely.

Maybe it’s knowing that he lives in Texas with his wife and daughters. Maybe it’s that he describes acting as a sport where actors “take swings at each other.” Or maybe it’s the way he squints his eyes when he delivers his answers with a slight drawl. But Kyle Chandler still seems a lot like Eric Taylor, the strict but beloved Dylan Panthers football coach he played for five years on Friday Night Lights.

Chandler, 49, picked up Coach Taylor easily, thanks to show creator Pete Berg. On the first day of shooting, Chandler and Berg walked into a gymnasium filled with the men who would play football players — most of them college kids who towered over the 6-ft. 1-in. Chandler.

“Pete goes, ‘Hey, go down there and tell everyone to shut the f-ck up and get against the wall.’ So I walk down there, and I say, ‘Hey! Everyone quiet and get up against the wall.’ They didn’t do anything. I started to get a little pissed off, I guess, and I let loose. ‘Hey! What did I just say? Get against —’ And they did. And I turned and looked at Pete, and it was one of those things. He gave me the character right there.”

Chandler had only played football for two years in high school in Georgia. “I was a short, fat kid the first year and got the hell beat out of me. And the second year I was tall and skinny. That was the year my pop died. So that was the end of my football career,” he says matter-of-factly. But he continues to follow the Georgia Bulldogs and Chicago Bears, as Chandler’s early years were spent in the Chicago suburb Lake Forest. For Chandler, the bigger challenge was learning how to act in front of a handheld 16-mm camera: there were no marks and the cameramen moved at will. It gave Friday Night Lights a shaky docudrama quality that fans alternately praised and loathed.

Though the NBC show struggled with ratings — so much so that Berg struck a deal to air the final season on DirecTV — it had a dedicated cult following that shipped lightbulbs to NBC in a bid to keep the program alive. And it’s gained a new generation of fans thanks to Netflix, which is why a handful of smaller roles in high-profile films like The Wolf of Wall Street have done nothing to convince audiences (to say nothing of this interviewer) that Kyle Chandler and Coach Taylor aren’t one and the same.

Chandler says the creators of Bloodline — who wrote the part for Chandler, much like they tailored a part for Glenn Close in their last show, Damages — hope to use those audience preconceptions to their advantage. “Coach Taylor was an honest man,” says Chandler. “They like that because they can manipulate the audience. I have this foundation of honesty. Then, when my character does bad things, people will still think, ‘Cut him a break. He must have a reason.’”

Bloodline, like Netflix’s most successful shows House of Cards and Orange Is the New Black, promises to go to dark places. Chandler plays a sheriff in the Florida Keys whose family secrets begin to unravel when his black-sheep brother returns home. But unlike Damages, the show is meant to be a little more relatable. “Think of three things in your family right now that are dark secrets that you really are ashamed of,” Chandler says. “You’ve already got three of them.” Even the seemingly perfect Taylor family, he muses, had skeletons in its closet.

Chandler has been looking to return to TV ever since the final episode of Friday Night Lights aired in 2011. But nothing felt quite right, including an offer to star in Homeland and a dropped pilot he filmed for Showtime called The Vatican.

Instead, he took a series of smaller roles in big films with prestigious directors, like Ben Affleck’s Argo, Kathryn Bigelow’s Zero Dark Thirty and Martin Scorsese’s The Wolf of Wall Street; all three films went on to be nominated for Best Picture at the Oscars. As with both Friday Night Lights and Bloodline, he always played some authority figure — a White House chief, a CIA agent, an FBI agent. He says that his penchant for these roles has become a joke among his friends and family, who say he’s never exuded that much gravitas offscreen.

Chandler’s return to television is more a matter of comfort than of artistic integrity; he dismisses the popular notion that television is in a golden age where it’s finally surpassed film as an art form. There is, he says, a lot of bad television out there.

“I just grew up in the television world. I understand it. When I am working on a show, I get to know these people, and we’re all comfortable and friendly,” he says. “When I walk on to a film set, it makes me kind of nervous. It’s like jumping onto a train that’s already zipping along and you know you’re going to be pushed off before the train stops because you’re just one piece.”

He adds a caveat: “I’ve never been a lead in a film, so I don’t know what that would be like. Maybe you own it, then.”

It’s true that Chandler is mostly a leading man on the small screen — but there, he calls the plays. He even admits to fighting against directors who wanted to soften Coach Taylor on Friday Night Lights.

“In one scene, Coach Taylor was supposed to say to one of the players, ‘Son, you lied to me, but you know what? You go talk to Counselor Tami and we can work it out,’” he recalls. “But the kid lied right to my face. So I said, ‘No, kid, you’re done.’ The director was pulling his hair out saying, ‘You can’t do that!’ I didn’t realize I was getting the kid fired from the show — his character was gone so he was gone — but Coach wouldn’t have let that slide.”

Bloodline is being billed as Chandler’s big return to television — the moment when fans will finally learn whether he can shed Coach’s baseball cap and shorts (which, by the way, he’s not allowed to wear on the new show). But despite the stakes, Chandler doesn’t seem too concerned. If it succeeds, great. If not, that’s fine too. And if people keep calling out “Clear eyes, full hearts, can’t lose,” to him on the street, he won’t try to run away from one of the coolest characters in television history. But, remember, it’s all just an act.

“I wish my dad had stayed alive because he used to call me a faker when I was a kid. If he knew what I was getting away with right now with this job, he’d call me something else. But that’s what we do. We get to lie on-screen. It’s not real.” He pauses. “I’m not a good person. I’m done with this interview.”

Read next: Here’s How Long It Takes to Binge Watch Your Favorite TV Shows Without Bathroom Breaks 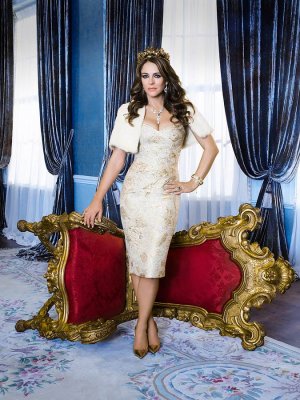 Elizabeth Hurley: I'm 'A Big Fan' of the British Monarchy
Next Up: Editor's Pick