No matter what you expected out of 2020, the reality has almost certainly been different. As the coronavirus swept from country to country, making especially brutal landfall in America, even those who remained healthy and employed struggled with loneliness, boredom, anxiety, cabin fever. And in late May, as Americans in major cities faced their third month of quarantine, the senseless death of George Floyd at the hands of a Minneapolis police officer launched a wave of protests against law enforcement’s violence toward the black community. Television, frankly, seems pretty insignificant in the face of both crises. But it did help us stay informed, connected and sometimes even intellectually stimulated at a time when the mere sight of other human faces could serve as an inoculation against loneliness and despair. From the holy agony and ecstasy of The New Pope to the unholy high school terrors of Dare Me, here are 10 shows that helped me weather the first half of this difficult year. Here’s hoping they make whatever you’re living through right now slightly more bearable, too.

With more and more shows ending or getting canceled after a couple of years, so as not to wear out their welcome in a Peak TV moment infatuated with novelty, Better Call Saul’s fifth season demonstrated the value of patient, thorough character development. It took this long to trace downtrodden public defender Jimmy McGill’s (Bob Odenkirk) transformation into the slick, morally flexible Saul Goodman whom we encountered fully formed in Breaking Bad. In season 5—arguably the series’ best to date—we watched him become a so-called “friend of the cartel,” a designation which earned him a harrowing hike through the Mexican desert with Mike Ehrmantraut (Jonathan Banks), among other brushes with death. But the most exquisitely painful story line traced the impact Saul’s emergence will inevitably have on his partner Kim Wexler (Rhea Seehorn)—a captivating character in her own right, torn between her own capacity for mainstream success and an internal compass more aligned with his outlaw ethics.

After executing a full, successful third season of her single-parenting dramedy without disgraced co-creator Louis C.K., Pamela Adlon had nothing to prove with season 4. The show loosened up under her solo leadership, adopting the vérité-style rhythms of 20th-century independent films and growing more confident in that meditative style with every episode. Like some of her avant-garde influences, Adlon doesn’t tell discrete stories so much as create scenarios whose themes spark reflection on the part of the viewer. This time around, she had me thinking about the power of friendship among parents (especially divorced moms), the way raising multiple children might feel more like a cycle than a series of individual timelines, how we deal with our anger at people who’ve wronged us but will never take it upon themselves to make amends.

Crystal Moselle’s adaptation of her wonderful 2018 indie film Skate Kitchen could be Better Things’ little sister. Like that show, Betty, which debuted in May, consists of half-hour episodes that prioritize character-based insights, emotional resonance and dilated moments of crisis and transcendence over tightly constructed plots. But its subject is that glorious, terrifying transition from teenage life to adulthood in the big city, where freedom looks like a skateboard, a fake ID and a little bit of pocket money. Coming-of-age stories are never in short supply, yet the distinctive faces and personalities who make up the show’s central all-female skate crew are like nothing I’ve seen on TV before.

There are great shows that ended badly (Game of Thrones, Lost, Roseanne 1.0), and then there are the divisive finales: The Sopranos, Seinfeld, Mad Men, Girls. Much rarer are series that go out on the perfect note, not just bidding fond farewells to characters viewers have grown to love (or love to hate) but elegantly tying up their most salient themes. When BoJack mastermind Raphael Bob-Waksberg left his titular anthropomorphic horse (voiced by Will Arnett) and the ghost writer who became his most insightful friend (Alison Brie’s Diane) in silence on a rooftop after six excellent seasons, his finale joined the ranks of Six Feet Under, Halt and Catch Fire, M*A*S*H and very few other shows that left us exhausted, tearful and grieving but ultimately satisfied.

Netflix’s hit docuseries Cheer made cheerleading a TV sensation this winter—which only made it more frustrating that Dare Me attracted so little attention. Set in a Midwestern town whose local real estate magnate (Paul Fitzgerald) is angling to cash in on the talent of a cheer squad that happens to include his two daughters by different wives, this thriller springs to life when he installs a tough, beautiful new coach (Willa Fitzgerald of MTV’s Scream) who challenges the top-girl status of his rebellious eldest child, Beth (Australian actor Marlo Kelly, beguiling). In the center of a conflict marked by escalating violence is Beth’s best friend Addy (The Get Down’s Herizen Guardiola), a quietly determined cheerleader still figuring out who she is. It was a riveting mystery, adapted from co-creator Megan Abbott’s novel, but equally enthralling was its dark, dreamy atmosphere. Before USA canceled it, in April, Dare Me promised to become everything I’d hoped HBO’s more popular, less original teen drama Euphoria would be.

This period dramedy is about as faithful a depiction of Catherine the Great’s rise to power in 18th-century Russia as Comedy Central spoof Another Period was a document of upper-crust Rhode Island life in Edith Wharton’s time. And that—along with Elle Fanning as a young Catherine, Nicholas Hoult as her debauched imbecile husband Peter III and dialogue from the droll, raunchy mind of The Favourite co-writer Tony McNamara—is what makes it so fun. Like its Oscar-nominated predecessor, The Great is a hilarious satire about gender and power as well as a reminder that European history wasn’t all as polite as Masterpiece miniseries make it out to be.

You could see the backlash to this all-star historical drama—which earned almost universal acclaim from critics, this one included—coming as soon as it was announced. Creator Dahvi Waller’s nine-part miniseries cast the beloved Cate Blanchett as Phyllis Schlafly, tracing the right-wing ideologue’s origin story in tandem with the implosion of a 1970s feminist movement led by women like Gloria Steinem (Rose Byrne), Shirley Chisholm (Uzo Aduba), Bella Abzug (Margo Martindale) and Betty Friedan (Tracey Ullman). So it was easy for some to accuse the show of making Schlafly too sympathetic. Here’s the thing: depiction isn’t endorsement, and Waller’s inquiry into what made feminism’s most influential female enemy the tyrannical, bigoted, infuriating person she was did not by any stretch of the imagination constitute apologizing for the harm she wrought. On the contrary, this smartly written, beautifully acted and subtly insightful series made it possible for even those of us who find Schlafly’s self-hating views mystifying to imagine how flesh-and-blood humans can devolve into self-serving monsters.

Religion has become an unexpectedly popular subject for TV, in the afterlife comedies that don’t stop coming (The Good Place begat Forever, then Russian Doll, Miracle Workers and most recently Upload), in explorations of identity like Ramy and Unorthodox and in accounts of political conflicts driven by religious differences, from Our Boys to Derry Girls. A sequel to the 2017 miniseries The Young Pope, which took Jude Law’s upstart American Pontiff on a journey from bad faith to true faith, Italian filmmaker Paolo Sorrentino’s The New Pope is something extremely different. With Law’s Pius XIII in some sort of divine coma and Muslim extremists terrorizing Catholic targets, his lieutenants at the Vatican recruit a depressive British cardinal (a tender, delicate John Malkovich) to take his place. Rather than dissecting 21st-century Catholicism, both seasons feel like an attempt to conjure the headspace of religious mysticism, in shots with all the majesty of a Renaissance fresco, a story whose mystery rivals the Book of Revelation and a sense of humor steeped in existential absurdity.

The Plot Against America (HBO)

In 2004, the late giant of American literature Philip Roth imagined an alternate reality in which Charles Lindbergh won the 1940 election, kept the U.S. out of World War II and set about reshaping the country to suit his isolationist, anti-Semitic views. Sixteen years later, with xenophobia, nativism and white supremacy on the rise, Roth’s novel about a Jewish family caught in this nightmare didn’t need much tweaking from The Wire collaborators David Simon and Ed Burns to resonate. The prestige-TV veterans simply stacked the adaptation with an ideal cast (Winona Ryder, John Turturro, Zoe Kazan and Morgan Spector are all spectacular), warmed up its shots with the unnerving golden light of nostalgia and got out of the story’s way… until the very end, which replaced Roth’s too-neat conclusion with something more suitable for 2020.

It was not Tanya Saracho’s choice to end Vida—the drama she created about two Mexican-American sisters who return home to L.A.’s Boyle Heights neighborhood in the wake of their mother’s death and attempt to save her poorly managed bar—after three seasons. Given just six supersize episodes, a reduced budget and a shortened production schedule with which to complete her expansive meditation on family, community and identity, Saracho and her writers had to do the heartbreaking work of “killing our darlings,” as she put it in a recent interview, to make room for all the “stories we owed.” The result bordered on miraculous: a thoughtful, emotional, sexy season of television that, without feeling rushed, probed mysteries that the sisters’ mom left behind, set every major character on a path of richly deserved growth and ended with a scene that had this viewer crying as hard as the characters themselves. 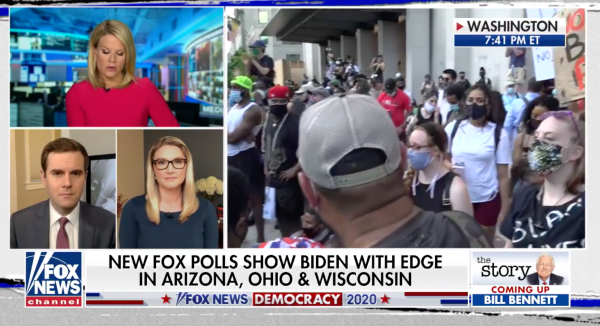 Where You Watch the George Floyd Protests Matters. Here's Why
Next Up: Editor's Pick