Even if it seems that the novels of Charles Dickens have been adapted for film and television too many times over the years, the opposite is probably true. Every generation should have plenty of Dickens to splash around in. His characters offer a kaleidoscopic range of emotions for actors to explore, and his plots have such sturdy bones that they invite all manner of creative interpretations: think of Alfonso Cuarón’s verdant and deeply romantic Great Expectations, with Gwyneth Paltrow and Ethan Hawke, which brought Dickens to late-20th-century New York, or Richard Donner’s wondrous Scrooged, the perfect holiday elixir for crabby adults, starring Bill Murray as the world’s most finest and most famous Christmastime miser. The important question to ask about a Dickens adaptation isn’t “Is it faithful?” but “Is it alive?”

Armando Iannucci’s The Personal History of David Copperfield may not be perfect, but it is alive, at least partly because of its perceptive, jaunty casting and fine performances. Dev Patel plays the title character, born to a single mother (she was widowed after his conception) and fated to weather a number of hardships en route to adulthood, though nothing can kill his spirit. As a boy (at this point played by Jairaj Varsani), he adores his tender-hearted mother, Clara (Morfydd Clark), and the family housekeeper, Peggotty (Daisy May Cooper), a woman of generous spirit and good humor: both women delight in his curiosity about people and language. Then, in a characteristically Dickensian twist, the cruel Mr. Murdstone (Darren Boyd) marries Clara and takes over the household, ultimately sending David off to work in a bottle factory. That’s no fun at all, but still, young David finds his way, making observations about the people he meets and writing down their funny or strange turns of phrase; before long he’s collected a compendium of human behavior, much of it amusing, though some displaying thoughtlessness or cruelty.

The full title of Dickens’ novel was The Personal History, Adventures, Experience and Observation of David Copperfield the Younger of Blunderstone Rookery (Which He Never Meant to Publish on Any Account), a wink at the many lives one life can encompass, and it was itself somewhat autobiographical: for one thing, Dickens spent time working in a shoe factory as a child. But as its title suggests, it’s also a celebration of observational powers, and Iannucci’s focus here is what makes a person a writer. Young David’s skills as a perceptive fly-on-the-wall are encouraged by his mother and by Peggotty, and later, he uses them to unlock the deeply human eccentricities of those around him. But he doesn’t live his life as a means of gathering material; rather, he’s a magnet for all that’s funny, odd or interesting about the world. He goes in search of nothing; everything comes to him. Even through times of hardship, when weaker souls might close down, his eyes are wide open every minute, his figurative butterfly net held perpetually aloft.

Iannucci—whose last movie was the 2017 satire The Death of Stalin—hasn’t changed the era or the setting of Dickens’ novel, but he’s not going for stately authenticity: This David Copperfield has a slapstick heart, and a rather whimsical toy-theater vibe. When young David is whisked off to Yarmouth by Peggotty, as part of Murdstone’s early efforts to get him out of the way, the tiny upside-down-boat where Peggotty’s family lives is a ramshackle riot of color, almost like a relic from Robert Altman’s 1980 hallucinatory gem Popeye. (When David later returns as an adult, it’s grayer, more weatherbeaten—we then observe it as he sees it, through adult eyes.) The action moves at a clip, although in the process of condensing a gloriously sprawling book into a rather compact two-hour movie, Iannucci does take certain liberties with the plot—the story whirls to an end rather hastily, as if he found himself stuck with bunches of loose ends that he wasn’t quite sure how to tie up.

But it all breezes by pleasurably enough, and Iannucci’s casting is key here: Tilda Swinton is wonderful as Betsey Trotwood, David’s aunt and eventual caretaker, bustling and buttoned-up at once. Peter Capaldi is an endearing Mr. Micawber, the scatterbrained patriarch who’s always in need of a loan, and Hugh Laurie makes a delightful, dithery Mr. Dick, trying his best to get on with a piece of writing but endlessly distracted by visions of King Charles’ severed head. Rosalind Eleazar is charming as Agnes Whitfield, David’s longtime friend and confidante and the woman whom he realizes, at long last, he truly loves.

Dickens wrote in an England that was mostly white, but his stories are capacious enough, and generous enough, to embrace everyone. It’s remarkable that in 2020 we still use phrases like nontraditional casting; it’s time to simply call it casting, as a way of shoving aside calcified notions about who can play what. Patel plays David Copperfield as a young man eager to face the world, no matter what it offers him; he’s motivated by kindness, even as he refuses to suffer fools. Nimble, appealing and attuned to the nuances of Dickens’ spirit, Patel is a good Copperfield for today, a bright young man who’s able to overcome adversity and go far. Everyone needs a story like that. Dickens knew it in 1850; we can’t retell it enough. 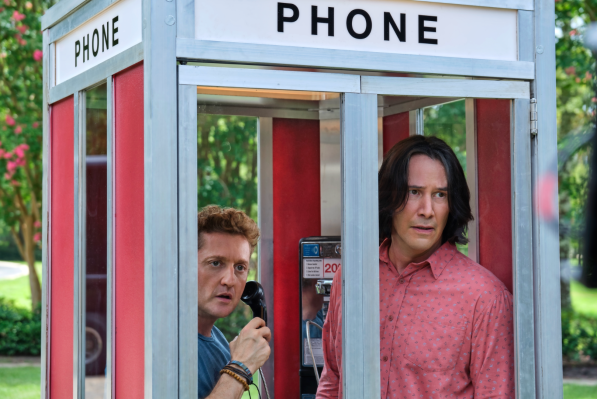 Bill & Ted Face the Music Is the Dose of Time-Travel Lunacy We Need Now
Next Up: Editor's Pick