The Society Is the Next Netflix Sensation You Won't See Coming

Around five years ago, Christopher Keyser found himself pondering the state of human society. “How did we get here?” he asked himself. “And is this the best we could’ve done?” These are the kind of big questions that fuel great literature, but Keyser, who co-created ’90s critical darling Party of Five, works in television. So he, alongside director and fellow executive producer Marc Webb (500 Days of Summer), endeavored to translate his inquiries onto the screen in the form of a show that would be both philosophical and entertaining.

The result is The Society, a surprising, provocative, occasionally messy yet frequently revelatory series whose first season arrives on Netflix May 10. Its appeal may not be obvious from the banal pilot, which recalls recent teen sci-fi serials like the CW’s The 100 and Netflix’s Danish-language saga The Rain: Beset by an unexplained nauseating odor, the wealthy New England town of West Ham sends a few busloads of high schoolers to the mountains to wait out an investigation. But when the kids return home, the town is empty of people. It soon becomes clear that not only are the adults gone for good, but the town is now somehow physically closed off from civilization. It’s an intriguing enough twist to keep skeptics hooked as the show’s true themes—and life-or-death stakes—develop at a pace that feels organic.

Suddenly alone, the teens don’t know whether they’ve returned to a radically altered West Ham or been transported to some other place that’s uncannily similar, down to the contents of each house. Can they survive? Will they find a way out? Are their parents dead or just somewhere else? Questions like this would dominate most stories with a similar setup. But the sci-fi elements turn out to be a bait and switch; nothing magical happens after the bus trip. Instead, within three episodes, The Society evolves into something remarkably ambitious: a work of political philosophy that’s partly inspired by Lord of the Flies but feels especially pressing in a post-Parkland world, where high schoolers have shown the capacity for both unspeakable cruelty and inspiring efforts for social change. Everything that makes the show riveting—the alliances, rivalries, violence, even deaths, along with glimpses of empathy and hope—comes out of the students’ struggles to build a new civilization in their town.

“My real desire,” Keyser explains over the phone, “is to do something that feels like a kind of roller-coastery entertainment but then suddenly makes you ask questions that you didn’t think you were going to ask.” He succeeds: Viewers will find themselves agonizing over teenage love triangles, then weighing opposing views on socialism, criminal justice or gun ownership. Frequent shocking twists allow The Society to, as Keyser puts it, “talk about big things in a way that is fun.”

To get a young audience to engage with such heavy ideas without feeling like they’re doing homework, Keyser, Webb and their collaborators flesh out a familiar high school social structure, grounding ideological conflicts in relatable teen characters: jocks, theater kids, loners, nerds. “This is essentially a character show, though it’s got high stakes,” says Keyser. At its center are Cassandra (Legion’s Rachel Keller), a bright, preternaturally mature leader, and her younger sister Allie (standout Kathryn Newton, of Big Little Lies and Blockers), a timid misfit who lives in Cassandra’s shadow. The girls’ cousins represent opposite extremes of the moral spectrum: While Sam (Switched at Birth fan favorite Sean Berdy) is a gentle, loyal kid who happens to be deaf and gay, his brooding brother Campbell (a chilling Toby Wallace) has a sadistic streak. Expanding out from these four, something like two dozen named characters populate this isolated world with a wide range of perspectives.

Without losing any of their specificity, these personalities become avatars for ideologies that traverse the political compass, from communism to libertarianism to fascism. This requires some suspension of disbelief on the part of the viewer, to be sure; it’s jarring to hear 16-year-olds deploy bureaucratic idioms like undisclosed location and pre-dawn raid. But this dissonance reflects a conscious decision. “We wrote about younger characters, but we treated them in some ways as if they might as well be adults, in that they had the same intuition or experiences,” Keyser says. “I hope that kids who watch it, at whatever age, feel like they’re not being talked down to.” To that end, the scripts are studded with references to Shakespeare, Greek theater and historical figures like Queen Elizabeth I.

The show reflects Keyser’s personal obsessions. A Harvard Law School grad and past president of the Writers Guild of America West who has also had a long career in political media, he cops to a fascination with “how we order societies, what rules we make.” The Society is remarkably persuasive in its demonstration of how personalities translate into politics and how quickly public sentiment around a particular leader or mode of governance can shift. Much of that verisimilitude can be attributed to the way Keyser fuses the psychological depth of classic literature with a rich understanding of political theory and world history.

Yet he’s the kind of leader who believes in sharing power. Quick to reject the auteur designation with which TV critics have anointed “difficult men” like David Chase and Matt Weiner, he insists that “this is not a show by me—it’s a show by all of us.” Praising Webb’s vérité-style visuals, Keyser recalls that “Marc was really insistent that [the camera] not feel conspicuous.” Instead, “it just feels like it’s living inside the world.” And he cites as crucial the show’s diversity of backgrounds and areas of expertise behind the camera, from co-executive producer Pavlina Hatoupis, who has lived all over the world, to a writing staff that includes playwright Qui Nguyen, the son of Vietnamese immigrants, and acclaimed novelist Maile Meloy.

Achieving gender parity in the writers’ room and among the episodes’ directors was particularly important to Keyser, who notes that adding women to the testosterone-driven Lord of the Flies mix “changes everything.” That effort shows in The Society’s perceptive depiction of women in power. What begins as the casual sexism of high-school jocks devolves into a more virulent form of misogyny. Brute force challenges democratic rule, and some characters end up espousing the scary rhetoric of the chauvinists who call themselves Men’s Right Activists. “This is intended to be a conversation about the way in which men and women need to figure out how to work and live together,” says Keyser.

The final layer of creative input came from the young actors, whose time on set in some ways paralleled their characters’ predicament. “They didn’t know each other at first, but they lived together away from home and became a kind of community,” Keyser points out. They were also afforded a rare amount of leeway. “We changed the story,” Newton tells me. Keyser and Webb, she says, “saw us take ownership of these characters. And that was because we knew that they believed in us and gave us the freedom to run wild.” Their performances are as essential to rendering the characters’ transitions from privileged teens to leaders, enforcers, peacemakers and insurgents believable.

In 'The Society,' all bridges lead to nowhere.
Seacia Pavao/Netflix

Unlikely as it may sound, this weird, high-minded teen drama has a good chance of becoming a big hit. Along with relative newcomers in breakout roles (Jack Mulhern as sensitive athlete Grizz; Natasha Liu Bordizzo as the group’s de facto spiritual leader, Helena), it features proven young stars like Berdy, Newton and her fellow Blockers alum Gideon Adlon—all familiar faces among the target audience. Built to binge, its twists promise to set social media on fire. To an even greater extent than Stranger Things or Riverdale, The Society is sophisticated enough to win over adults.

But its most important advantage may be its platform, Netflix, which claimed earlier this year to have drawn tens of millions of viewers to youthful offerings like Sex Education, Spanish soap Élite and You, which failed to find an audience at its original home, Lifetime. Though he’s still adjusting to the pace of binge viewership—“I’m way too old to be excited about that,” Keyser jokes—he says it would’ve been tough to get The Society, which was originally conceived for Showtime, made in the Party of Five era. Until recently, a platform that had the bandwidth to greenlight to such a wild experiment would’ve been unthinkable.

Of course, the lives of teenagers have also changed in the generation that separates the two series. Kids who grew up amid Obama-era progressivism must make sense of a chaotic presidency, a resurgence of both socialism and authoritarianism, terrifying climate-change projections, and the rise of massive activist movements like Black Lives Matter and #MeToo. Netflix viewers abroad are sure to see parallels to Brexit debates or violent governmental power struggles.

Keyser acknowledges that, in such a politicized moment, his show feels uncommonly urgent. It’s easy to find characters reminiscent of Hillary Clinton or Donald Trump. Yet Keyser rightly points out that its themes are universal. “There are things going on now that seem epic, but there are generations that fight wars—or even today are in cultures where the questions asked are huge,” he notes. “But they behave like ordinary people on ordinary days.” Hence the many allusions to Hamlet and Aeschylus, as well as the persistence of everyday preoccupations like love, identity and resources.

For 22-year-old Newton, what’s most exciting is the show’s faith that young people are capable of grasping these big ideas. “Teenagers are so complicated and interesting,” she observes. “And I don’t find a lot of that on TV. I find them over-sexualized or stereotyped.” Her wish is that it makes audience ask: “Who are they when nobody’s watching? And what are the things that you really value in your life?” As these characters are forced into a more abrupt, extreme version of the adulthood that awaits every teen, the stakes become all too real. “I hope,” she says, “it puts our values in perspective.” 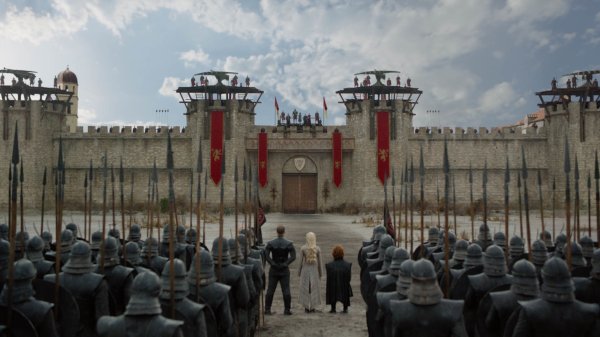 How Tyrion May Have Ruined Cersei's Shot at Victory on Game of Thrones
Next Up: Editor's Pick