10 Candidates Will Take the Stage in November's Democratic Debate Tonight. Here's Everything to Know

Get ready for heated arguments, political debates and pointed questions. No, it’s not your Thanksgiving dinner — it’s the November Democratic debate.

Democratic presidential primary candidates will square off tonight on a debate stage in Atlanta, where the primary debate will be co-hosted by MSNBC and the Washington Post, airing live from 9 p.m. to 11 p.m. ET. Follow along with TIME’s live coverage here.

But some things have changed since the October Democratic debate.

Only 10 candidates will appear on stage, down two from the debate last month. Former Texas Rep. Beto O’Rourke dropped out of the race on Nov. 1, and former United States Secretary of Housing and Urban Development Julián Castro missed the debate polling requirements for the first time.

There have also been major developments in Washington, D.C. The first public hearings for the House of Representatives’ impeachment inquiry into President Donald Trump began on Nov. 12 and have continued into this week.

“The debates [now] have an even bigger television event that’s overshadowing them,” Margaret O’Mara, a professor of American political history at the University of Washington, tells TIME. “This is the impeachment of the person one of them will presumably go up against in 2020, so it’s hanging over [the candidates],” she continues. “A number of them are sitting senators, who will have a say if this indeed goes to the Senate.”

The candidates’ various health-care proposals — and how they plan to pay for them — might get special attention after Warren released her plan to pay for Medicare for All in early November. The $20.5 trillion plan has received significant attention, and could be an opening for others to attack her. The usual Democratic issues of taxes, immigration and gun control will likely come up again.

Like the October Democratic debate, expect to see tension between the more moderate wing of the party — Biden, Buttigieg and Klobuchar — and the more progressive wing with Warren or Sanders. Warren and Biden still lead in the polls and have recently clashed in the media — those disagreements could continue on stage this week. Buttigieg has also gained steam, and could be subject to more attacks.

Here’s everything you need to know about the November Democratic debate.

When is the November debate?

The debate will take place on Wednesday, Nov. 20 in Atlanta at Tyler Perry Studios, the film production studio founded by actor and filmmaker Tyler Perry. It will air from 9 p.m. to 11 p.m. ET.

Georgia has swung Republican in the most recent Presidential election cycles, but Democrats hope they can turn it blue in 2020. Democratic gubernatorial candidate Stacey Abrams narrowly lost in 2018 and the state’s two senate seats will be up for re-election in 2020.

The debate will broadcast on MSNBC and stream on MSNBC.com and washingtonpost.com. People can also watch it on NBC News and The Washington Post‘s phone apps, or listen on SiriusXM Channel 118 and TuneIn.

Which candidates have qualified for the November Democratic debate?

The requirements to appear in this week’s debate have risen since the previous one in October; candidates had until 11:59 p.m. on Nov. 13 to reach 3% in at least four qualifying polls, or 5% in two early state polls since Sept. 12. They also needed to receive 165,000 unique donors with at least 600 from at least 20 states.

Here’s everyone who made the November debate cut:

Biden served two terms as President Barack Obama’s Vice President and represented Delaware in the U.S. Senate from 1973 to 2009.

Booker was the mayor of Newark, N.J., from 2006 until 2013. He’s since served as the first African American senator from New Jersey.

Buttigieg was an intelligence officer in the U.S. Navy Reserve between 2009 and 2017. He’s been the mayor of South Bend, Ind. since 2012, and would be the first openly gay presidential nominee for a major political party if he wins the primary.

Gabbard has represented Hawaii’s 2nd District since 2013, and is the first American Samoan and first Hindu member of Congress. She’s a veteran of the Iraq war.

Harris came up through California politics, serving as the district attorney of San Francisco from 2004 to 2011 and the first woman attorney general of California from 2011 until 2017. She’s been a senator for California since 2017.

Klobuchar was the first woman to be elected senator from Minnesota in 2006. She previously served as the county attorney for Minnesota’s most populous county, Hennepin County, from 1999 to 2007.

A self-described democratic socialist, Sanders has served as a senator for Vermont since 2007 and previously was Vermont’s sole congressional representative from 1991 to 2007. He ran for the 2016 Democratic nomination and lost to former Secretary of State Hillary Clinton.

Steyer started the hedge fund Farallon Capital in the 1980s. He has also founded the political groups NextGen America and Need to Impeach, and has poured millions of his own money into television ads and digital campaigns calling for President Trump’s impeachment.

In 2013, Warren became the first woman senator from Massachusetts. She previously taught law, specializing in bankruptcy. She proposed the original idea for the Consumer Financial Protection Bureau in 2007 while still teaching at Harvard Law School.

Yang is known for advocating about the threat of automation. He founded Venture for America, a nonprofit and fellowship focused on creating jobs in cities across America.

Candidates will stand in the following order from left to right: Booker, Gabbard, Klobuchar, Buttigieg, Warren, Biden, Sanders, Harris, Yang and Steyer. The highest polling candidates — Biden and Warren — will stand in the middle.

Who didn’t qualify for the November debate?

Former HUD Sec. Julián Castro had met the donor requirements but didn’t quite meet the polling threshold by the Nov. 13 deadline.

An all-female panel will moderate the debate. According to the Post, it will be only the second time a major political debate is moderated by all women.

What are the big issues that will likely come up?

Political scientists and analysts tell TIME that the House’s impeachment inquiry into the President will likely come up, especially since the impeachment hearings will continue into the week.

“The fact that a Senate impeachment trial could occur shortly before or even during the early presidential primaries and caucuses might be important,” Seth Masket, a professor of political science at the University of Denver, writes over email. “The candidates who are in the Senate could be asked what they’d do in that situation.”

Health care will almost certainly come up again, especially since Warren released her $20.5 trillion proposal for Medicare for All in early November. The plan would impose massive tax increases on billionaires and businesses, but not on the American middle class.

Warren had previously been evasive when asked how she’d pay for Medicare for All. As John Hudak, a senior fellow in Governance Studies at the Brookings Institution, explains, “I thought Elizabeth Warren’s responses to the question of how to pay for Medicare for All in the last debate was by far her weakest moment in all of the debates — and she can’t have many more of them.”

But now that Warren has released a concrete answer, she may be on more even footing. Hudak points out that voters have responded to Sanders and Warren in part because they’ve managed to avoid sounding like “slick politicians,” and having a straightforward answer on Medicare for All could help Warren maintain that image.

However, Masket points out that the Medicare For All plan could also “present an opportunity for other candidates to attack Warren, and also for her to defend her proposal.”

Hudak predicts that racial and social justice will also come up, especially because the debate will take in Atlanta. Harris and Biden might then have to defend their history of supporting “tough on crime” criminal justice policies, which critics argued exacerbated mass incarceration.

David Barker, the director of the Center for Congressional and Presidential Studies at American University, also writes that “Given that environmental policy was not discussed at all during the last debate, I think there will be an emphasis on it this time, relatively speaking.”

Immigration could get more attention given the current case before the Supreme Court on whether or not the Trump Administration can end the Deferred Action for Childhood Arrivals (DACA), program, Jaime Dominguez, a professor of political science at Northwestern, tells TIME.

“There will likely be ongoing battles between Warren and Biden, who are emerging as the leading candidates from the moderate and progressive wings,” Masket writes. As O’Mara of Washington University points out, Warren and Biden have recently clashed in the media, and that could continue onto the stage. Warren called Biden’s recent decision to accept super PAC money “disappointing,” and Biden said Warren is “condescending” toward voters.

“But given the rise of Buttigieg in recent polls, this could be an opportunity for some further scrutiny of his candidacy,” Masket continues. As Buttigieg rises in the polls, his background — specifically his time as a consultant for McKinsey — might also face some scrutiny, Barker writes in an email.

Barker predicts that “Biden [will] to continue to go on the attack, now that he is pretty consistently behind in Iowa,” and will especially focus on Warren or Sanders. Barker also says Warren and Sanders could take fire from other moderates on stage, like Buttigieg or Klobuchar, who have framed themselves as alternatives to the far left-wing of the party. Barker explains that Harris in turn might go after Klobuchar or Buttigieg, “given that they are standing directly in her path as the ‘next in line’ after the top [three] (where she used to be).”

Hudak tells TIME he also predicts more infighting within ideological groups than in previous debates. Warren might go after Sanders, or Buttigieg might go after Biden, he says. “Warren is not going to win the nomination because she flips a ton of Biden voters,” Hudak explains. “I think it’s because she flips, you know, Sanders voters, probably some Yang voters.”

The recent additions of Deval Patrick and Michael Bloomberg might also cast a shadow over the debate, O’Mara says. “You have Mike Bloomberg and Deval Patrick coming in as perhaps the kind of centrist alternative to what’s clearly a progressive surge by Warren,” she says. The question of electability could be raised, especially after a New York Times and Siena College poll found that Biden and even Sanders did better than Warren against Trump in crucial rust belt states of Michigan, Pennsylvania and Wisconsin.

The threat of Bloomberg and Patrick could also affect more moderate candidates on stage. O’Mara says that centrists like Buttigieg, Harris or Klobuchar may try and convince voters “don’t give two thoughts to someone like Mike Bloomberg or Deval Patrick — you already got us here.”

Where do the candidates stand in the polls?

There has been some movement in the polls since the last debate. Warren has gone down, while Sanders and Buttigieg have gone up. “Biden has regained a little steam just about everywhere EXCEPT Iowa,” Barker writes.

American University Professor of Government James Thurber also writes in an email that viewers should watch Buttigieg. “He is going up in the polls nationally, in Iowa and there is excitement in New Hampshire,” Thurber says.

The original version of this story misstated that Tim Ryan had not qualified for the November Democratic debate. He dropped out of the race in October. 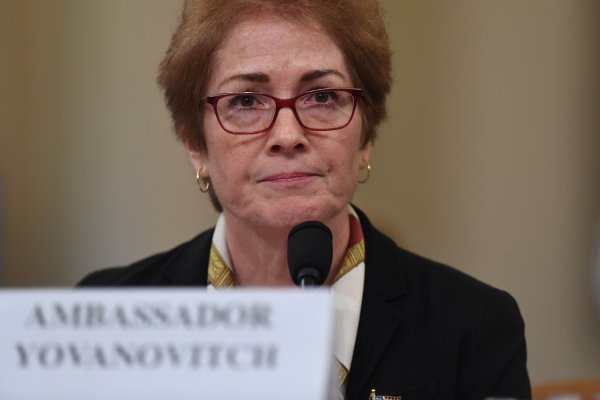 Trump Aims at U.S. Diplomat, Shoots Himself in the Foot
Next Up: Editor's Pick