Julián Castro Finally Had His Big Moment at the First Debate

Julián Castro has been a rising star in the Democratic Party since at least 2012, but it took him until Wednesday’ night’s presidential primary debate to finally catch the spotlight.

Since launching his campaign, the former San Antonio mayor, Democratic National Convention keynote speaker and HUD Secretary has had the personal story, bold policy proposals and smooth speaking style that are hallmarks of a solid contender. What he hasn’t had is any attention.

But given a chance to share the stage in Miami with Massachusetts Sen. Elizabeth Warren, New Jersey Sen. Cory Booker and former Texas Rep. Beto O’Rourke, Castro finally had his moment.

He used a detailed immigration reform plan as a launching pad to talk eloquently about recent headlines about migrant children held in appalling conditions and the heartbreaking photo of Oscar Martinez and his young daughter Valencia, who drowned trying to cross the border. His immigration agenda took straight aim at his fellow Texan, O’Rourke.

Castro’s plan is revolutionary by any standard: he wants to decriminalize border crossings, establish a comprehensive pathway to citizenship, break up ICE as it currently exists and create a Marshall Plan to invest in Latin American countries to de-incentivize migrants from heading north. He promised to end the “metering” system on asylum claims that forced Martinez and his daughter Valeria to attempt a fatal river crossing.

And he challenged his opponents onstage — especially O’Rourke — to support the repeal of Section 1325, which criminalizes illegal immigration and is used as a pretense to separate families and deport undocumented immigrants. His plan would reclassify immigration as a civil issue rather than a criminal one.

Warren has already endorsed the plan, and over the course of the debate Thursday, many of the other Democrats raced to catch up. Booker said “what Secretary Castro and I are talking about is that we have the power to better deal with this problem through the civil process than the criminal process.” Rep. Tim Ryan said “I agree with Secretary Castro.”

Even Minnesota Sen. Amy Klobuchar, who voiced Midwestern skepticism about bold proposals on free college and Medicare for All at other points in the debate, said she would be “happy to look at his proposal.”

When O’Rourke called for immigration reform but stopped short of supporting the repeal of Section 1325 out of concern it could embolden human traffickers (“I don’t think it’s asking too much for people to follow our laws when they come to this country,”) Castro pointed out that human trafficking is already against the law, and urged him to “do your homework on this issue.” In the spin room after the debates, Castro’s brother Joaquin said he didn’t intend to single out O’Rourke on immigration, but that for a representative of a border town he’s been “disappointing” on the issue.

On issues beyond immigration, Castro held his own and appeared confident and well-prepared. He didn’t bluster or make mistakes. He also seemed to have a firm grasp on the message of inclusion that has pervaded the Democratic primary. In response to a question about whether his health plan would cover abortion access, Castro said that his plan would cover abortions, then added that that coverage wouldn’t just apply to women, but would also include “someone in the trans community.”

By the end of the night, Castro had sent out a campaign email in Spanish and liberal Twitter was aflutter with a new idea: Warren/Castro 2020.

With Lissandra Villa in Washington 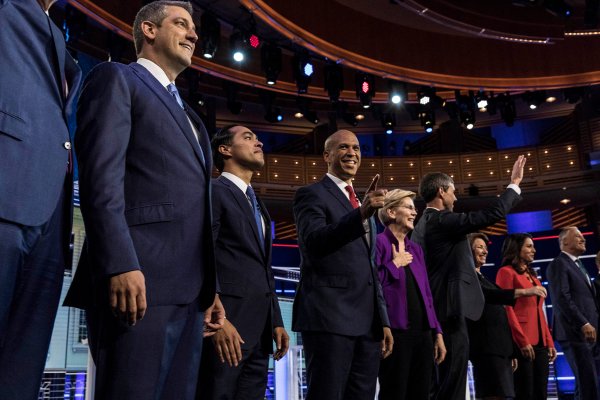 Democrats Don’t Have a Plan to Deal with Mitch McConnell
Next Up: Editor's Pick