You may have heard of Tim Ryan’s cousin. Sitting on a barstool in an office-park brewery in West Des Moines, Iowa, Ryan tells the tale of how cousin Donny called him up two decades ago, shell-shocked and soon to be out of a job at the electrical-parts factory where he’d worked for seven years. The last thing Donny did was box up the equipment he’d been running to ship it to China, along with his job.

It’s an anecdote that Ryan deploys often. It’s also one that could have come from the mouth of President Donald Trump, whom Ryan is now running against. An eight-term Democratic Congressman from a largely white, working-class part of Ohio, Ryan has just launched a presidential campaign built around the plight of the people Trump dubbed the “forgotten men and women” of America. And even a few years ago, the 45-year-old swing-state Congressman may have looked and sounded like a presidential candidate from central casting, a man following the path taken by eight Presidents from Ohio to the White House.

But as the 2020 race gets under way, Ryan barely registers in the crowded Democratic presidential contest. The party is fielding its most diverse group of contenders in history, including firebrands, pioneers and coalition builders. In a race dominated so far by policy ideas like free college and breaking up monopolies, there’s little sign of an opening for a little-known Midwestern Congressman who was against abortion rights until 2015 and has made rebuilding the party’s connection with blue collar voters the centerpiece of his campaign. Most of the latest polls in Iowa and New Hampshire didn’t even ask about Ryan, who faces a steep climb just to qualify for the first Democratic debates in June.

But even as they dismiss Ryan’s chances, many Democrats say the party should heed his message. To win back the White House, they say, Democrats first need to win back workers who share the frustrations Ryan sees when he’s out with his family. “I could win Pennsylvania, Ohio, Michigan, Wisconsin; rebuild the blue wall; and take out Trump,” Ryan tells TIME. But that’s not all. “I don’t want it to be just about beating Trump. It’s got to be about totally forging a new politics in the country that realigns things. It’s got to happen.”

Ryan admits that he is a long-shot contender. “For me, it’s Iowa, New Hampshire,” Ryan says, sipping a locally made pint of Foxy Blonde ale. “I have to do really well. I don’t know what that means in the field of 19 people. It used to be three tickets out of Iowa, and now maybe it’s, like, six?”

The Congressman’s politics can be equally hard to interpret. It’s easy to caricature a former NRA guy who has supported corporate-tax cuts and tried twice to dethrone House Speaker Nancy Pelosi for being out of step with today’s Democratic Party. But Ryan is no centrist. He may not be for the Green New Deal as it stands, but wants to partner with the private sector to develop new environmentally friendly technologies to replace a vanishing manufacturing sector. He’s a self-described progressive, but one who doesn’t sign on to far-left ideas like abolishing ICE or the Electoral College. And he’s a yoga and meditation devotee who wrote a book on the practice of mindfulness and another on food policy.

Ryan grew up in Niles, Ohio, a small city on the outskirts of the once mighty industrial hub of Youngstown. He and his brothers were altar boys at Our Lady of Mount Carmel Catholic Church, where his priest celebrated a private mass for Ryan’s family and close friends just hours before Ryan delivered his announcement speech on April 6. The priest played to the choir with his sermon, telling the clan to hold out hope for Ryan’s candidacy. After all, the priest said, the Pharisees doubted that someone from Galilee could be a prophet, let alone found Christianity. “It was the best homily,” Ryan chuckles. “A President from Niles? Come on.” (Ryan is in on the joke; President William McKinley was born there, and the Congressman launched his original House campaign from the McKinley presidential museum.) In a party marked by rising secularism, Ryan remains devout. “To me, my faith is about love and compassion,” he says.

A standout high school quarterback, Ryan was recruited to play at Youngstown State. A knee injury when he was 19 sidelined him and sent him studying political science at Bowling Green. Between stints working for his local Congressman, the troublemaking James Traficant, and a term in the state Senate, he earned a law degree. In 2002, after Traficant was indicted for bribery, racketeering and tax evasion, Ryan, then 29, ran for his former boss’s job and won, making him the youngest Congressman in the country at the time. (Though Traficant was expelled from the House, he still got 15% of the vote in 2002 as a jailhouse candidate and 16% in 2010.) The district is now among the poorest in the U.S., and Ryan has used his perch on the powerful House Appropriations committee to bring home millions of dollars in grants.

Ryan has long mused about running for higher office. Whether he can compete with a host of better-known and more dynamic competitors is a different question. At a moment when rivals like Elizabeth Warren are rolling out well-formed policy proposals honed with input from think tanks and networks of advisers, Ryan is serving as his own policy chief. He lacks the online fundraising army that has powered candidates like Bernie Sanders, Kamala Harris and Pete Buttigieg. Nor does he have the big-dollar backing of contenders like Joe Biden and Cory Booker.

The reality of his candidacy comes through as a kind of humility bordering on fatalism. Before sitting down for a beer with TIME, Ryan fielded questions from potential Iowa caucusgoers gathered on the brewery’s concrete floor. “This will not be easy,” Ryan told his crowd. “I’m not a superstar. I’m not a savior. I will tell you I will jump in the foxhole with you, and we will get this done. We are smart enough, we are creative enough, we are courageous enough, to pull this off. But it will be a long slog.”

Few Democratic observers believe Ryan has a chance of emerging as the nominee. But there is evidence that his peers should be listening to his pitch. For all the energy on the party’s left flank, the Democrats’ path back to the House majority ran through the Midwest in 2018, driven in large part by suburban women who have soured on Trump’s bravado. Many Democrats are eager for presidential candidates who promise big changes, but plenty of voters in the heartland simply want to believe politics can be practiced across the aisle, as Ryan has shown in working with GOP colleagues on defending Ohio military bases and fighting Great Lakes pollution.

Cousin Donny is hardly the only person in this part of the country to have been affected by the economic upheaval of the past decades. In fact, Ryan says it was another family member’s call that spurred him to seriously consider a White House run. In November of last year, his stepdaughter Bella called in tears. Her friend’s father was soon to lose his job, she said, when the local General Motors plant closed its doors. Ryan was reduced to tears too–“It was brutal,” he recalls–and sparked to action. 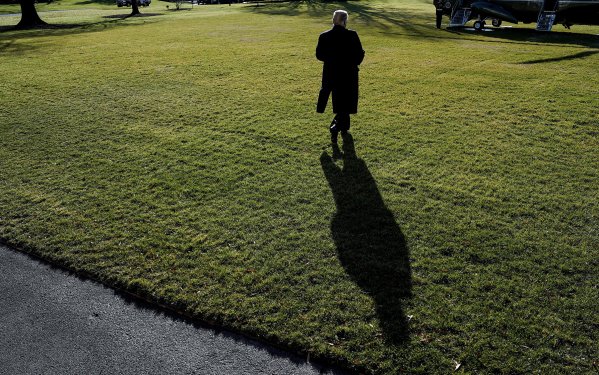 Pelosi Won't Talk Impeachment. Democrats Might
Next Up: Editor's Pick