Rep. Adam Schiff on How the Trump Impeachment Hearings Will Make History

Democratic Chairman of the House Permanent Select Committee on Intelligence Adam Schiff awaits testimony from Bill Taylor, charge d'Affaires at the US embassy in Ukraine, and George Kent, Deputy Assistant Secretary of State for Europe and Eurasia, before the House Permanent Select Committee on Intelligence hearing on the impeachment inquiry into President Donald J. Trump, on Capitol Hill November 13, 2019 in Washington, DC.
Jim Lo Scalzo – Pool/Getty Images
By Alana Abramson

Representative Adam Schiff, the chairman of the House Intelligence Committee, has the calm demeanor of a student who knows he’s ready for a big exam. On the evening before the first public impeachment hearings of the 21st century, the anticipation on Capitol Hill is palpable. As lawmakers hurry to vote, reporters trail them with questions about the next day’s drama. Key staffers from both parties have spent the day circulating talking points and making their case to the media.

But Schiff, who has become the public face of the probe, is seated casually in one of the chairs strewn around a small, wood-paneled room off the floor of the House of Representatives. He’s “almost” finished writing his opening statement, he says, and he even hopes to get a little bit of sleep before tomorrow morning. It’s only when asked about the stakes of the hearings that he concedes this test is anything but academic. “All of us are aware of the historical significance of what’s going on, of what it means to the country,” he says. “We’re determined to do our very best to bring out the facts.”

Schiff’s focus on the facts is a large reason why House Speaker Nancy Pelosi has entrusted him with leading the impeachment inquiry. But as the inquiry shifts from closed-door depositions to public hearings, the pressure is on the 59-year-old Harvard Law School alumnus and California lawmaker. Nothing less than the fate of the Trump presidency, the electoral chances of House and Senate Democrats next November, and the balance of power between Congress and the White House for a generation could ride on how he helms the public hearings.

Over the next two weeks, his committee will hear again, this time on the public stage, from 11 witnesses who have privately alleged that the Trump Administration used Ukraine policy improperly. Some have testified that Trump was using the power of his office to advance his own interests to the detriment of American national security. But most of the allegations have already leaked or been made public by lawmakers, so the real goal of Schiff and the Democrats is to convince members, and voters, that Trump’s withholding nearly $400 million in foreign aid to Ukraine, in exchange for a promise of an investigation into his chief political rival Joe Biden, is such an abuse of the power of his office that he should be the first President ever removed by Congress.

To start the proceedings on Nov. 13, Schiff picked William Taylor, who serves as the U.S. chargé d’affaires in Kiev, and George Kent, a top U.S. State Department official, as the first two witnesses on the public stage. Schiff describes both as “apolitical individuals who just want what’s best for the country,” and in their testimony both expressed alarm about the shadow operation, run primarily by Trump’s political appointees and personal attorney Rudy Giuliani, to persuade the new Ukraine administration to announce investigations they believed would benefit Trump politically. “Once I arrived in Kyiv,” Taylor told lawmakers, “I discovered a weird combination of encouraging, confusing and ultimately alarming circumstances.”

Republicans, for their part, argue the witnesses are motivated by policy differences with the President. A memo circulated to Republicans the day before the hearing says in part that the inquiry stems from “unelected and anonymous bureaucrats” who oppose Trump.

Schiff himself is the target of attacks too. Trump has labeled him “shifty Schiff.” But his allies say Schiff’s prosecutorial experience makes him steady under that kind of fire. “He’s the guy you want in the trenches with you,” says a Pelosi aide. “And we are in the trenches.”

The attacks give him little room for error. In September, he gave a summary of Trump’s July 25th call with Ukrainian President Volodymyr Zelensky, incorrectly claiming that Trump asked Zelensky to “make up dirt”on Biden. Schiff claimed it was partially a “parody” but Republicans immediately harped on it, with lawmakers incorporating it into their unsuccessful vote to censure him and Trump arguing he should be arrested for treason.

Former Representative Steve Israel, Schiff’s close friend who speaks with him regularly, says Democrats need to reach “the 20% of the population that’s undecided about [Trump]” to move the needle on impeachment. Schiff, he argues, is the best person to do that because he doesn’t let himself get bogged down by partisan infighting. “He’s really grounded,” Israel observed. “He’s unflappable.” Schiff’s other defense is preparation. In the days before the public hearings, he was in constant touch with his staff—“the more homework the better,” he says—and cramming continued until the very last minute.

Schiff’s greatest challenge may be getting Americans, fatigued after almost three years of White House drama, to tune in to learn the facts and judge for themselves. That, as much as anything, he says, is the ultimate goal of the hearings. “If people have a good understanding of what the President did, what the people around him did, the damage that has been done to national security,” and most important, he says, if they “can make a thoughtful decision about whether that conduct is compatible with the office of the presidency, I’ll feel we accomplished what we needed to.” 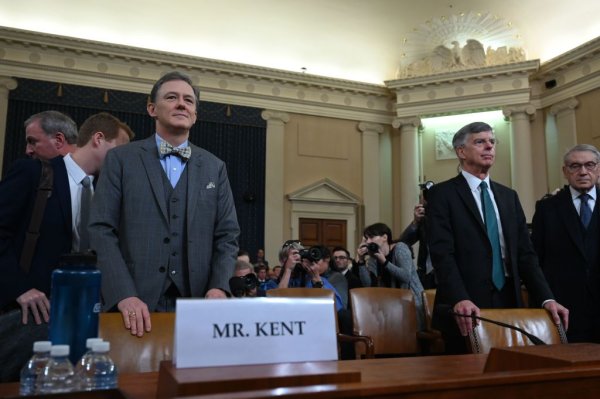