Our Collective Ignorance About the Rust Belt Is Getting Dangerous

Abandoned switching locomotives sit parked on the grounds of the former U.S. Steel McDonald Works steel mill near Youngstown in Campbell, Ohio, U.S., on Tuesday, Dec. 1, 2016.
Luke Sharrett—Bloomberg / Getty Images
Ideas
By Anne Trubek
Anne Trubek is the founder and director of Belt Publishing. She is the editor of Voices from the Rust Belt.

The Rust Belt, linguistically speaking, is one of America’s newest regions. The name was largely popularized in 1984 by, of all people, Walter Mondale. At a campaign stop during the presidential election, Mondale made a speech to steelworkers at the LTV plant in Cleveland in which he decried Reagan’s position on trade, particularly the lifting of quotas on steel imports, which had sent the industry into crisis. As he put it, “Reagan’s policies are turning our industrial Midwest into a rust bowl.”

For over three decades since, the term has been deplored, praised, and parsed. There is a sizable contingent — especially among the baby boomers who remember the moment the term was coined — who consider it derogatory and strive to have it replaced (recent attempts to rebrand the region include the “Trust Belt, ” the “New American Heartland,” and the “Freshwater Region”). But the term has stuck.

Definitions of where, exactly, the Rust Belt is are also often debated. There is no answer. The term was not invented by geographers but by a politician and the media. There are no natural borders, as there are with the East and West Coasts, say, or topographic features, as with the Great Plains or the Rocky Mountains. “Rust Belt” is a historical term, like “New England” and “Sun Belt” (even “Midwest” is as much historic as geographic). “Post-industrial Midwest” can serve as a synonym (along with its cousins, “industrial Midwest” and “formerly industrial Midwest”). Michigan, Ohio, and Pennsylvania are central to the region, as well as parts of Illinois, Wisconsin, and New York. “As far west as Milwaukee and as far east as Buffalo” usually works. Borderlands, such as Cincinnati and St. Louis, as well as abutting regions such as Appalachia, can be fun to debate over beers — just how rusty are they? — but in the end, anywhere an economy was previously based on manufacturing and has since been losing population can be part of the gang.

This is true internationally, too — China and Russia and Germany and just about any country with a history of manufacturing have rust belts where economies were once based on industry and now no longer are; at least, that is how such declining regions are described in news headlines. Starting with the 2016 presidential election, the term was used more than it had been in recent memory by the American press, usually to describe the then-surprising popularity of Donald Trump and Bernie Sanders, who were campaigning, just like Walter Mondale before them, for more restrictive trade policies. Although Trump’s support was strong in the South, the West, and many areas of blue states like New York and California, Trump used the Rust Belt as an example of America’s fall from prior greatness. Since the election, the term has continued to appear even more often in the mainstream media, usually in articles seeking to understand the appeal of Trump in the so-called Rust Belt region — again, despite Trump’s equal or greater support elsewhere in the country.

The most common culprit for Rust Belt woes cited by politicians and the media is the North Atlantic Free Trade Agreement. And though NAFTA has become a popular political talking point, its impact on the region has been secondary. Mondale placed the blame on the policies of Ronald Reagan. But even earlier, in the 1970s, the demand for steel, which was high during World War II, had begun to wane, and many saw their jobs disappear. Arguably the most symbolic date in Rust Belt history was Black Monday, September 19, 1977, when Youngstown Sheet and Tube in Ohio closed down, leading to a loss of some forty thousand jobs. Also notable: the region’s population peaked in the 1970s and has been in decline ever since.

Those manufacturing jobs are never going to return to the levels seen in the 1970s. The lack of jobs and opportunity for the white working class has been an ongoing problem for over forty years now — long before Obama, Clinton, or even Reagan.

And so the term “Rust Belt” continues to define the region, to the consternation of both those who have never liked it and those who wish the economy — any economy — would show up and turn “Rust Belt” from open sore to quaint artifact. And while the term may lack geographical strata, it has historical layers, and they are thick and redolent. The phrase is born of loss, but has acquired texture, depth, and decades’ worth of meaning.

That more people have become curious about the Rust Belt since the 2016 presidential election is a welcome development. But it has become increasingly tempting — and increasingly dangerous — to reduce the Rust Belt to clichés. At a time when it is more important than ever to understand the nuances of this complex region, what is published instead are often articles on the “typical” Rust Belt resident — more often than not a white male Trump supporter. Generalizations about the region’s population are now as popular as simply ignoring the Rust Belt was just a few years ago. Most are wrong.

Some important facts: Many Rust Belt cities have minority populations that statistically outpace those in other parts of the country. The largest per capita Muslim population in the United States is here, in Dearborn, Michigan. With so much emphasis placed on the manufacturing sector, many overlook the largest employers in the region: hospitals, retailers, and institutions of higher education. Of the handful of cities in the United States that support an Orthodox Jewish population, many are in the Rust Belt. A century ago, the region’s cities were often populated primarily by non-native English speakers. For example, in 1900, over 75 percent of the residents of Cleveland, Ohio, were foreign-born or first-generation immigrants.

To sum up such a diverse region with a few adjectives, or a rags-to-riches story of exceptionalism with a message of individualism at its core, is both misleading and dangerous.

We’ve come to recognize the major trends, popular as topics in opinion pages and stump speeches, that have come to shape the narrative of the region: racial discrimination, poverty, job loss, climate change, neglect, depopulation. But in doing so, we have created a narrative inequality in this nation: some stories are told over and over while others are passed over, muted. What about the happy childhoods or the successful community ventures or the sheer beauty of the landscapes in some of these cities? It’s time to open up and allow those who call these cities home to feel empowered to speak in the same way a pundit in New York City does. It’s time we create a much-needed space for the deep, various, complex, sad, wonderful, and pressing stories of the Rust Belt, which perhaps has the potential to heal a country overrun by division. 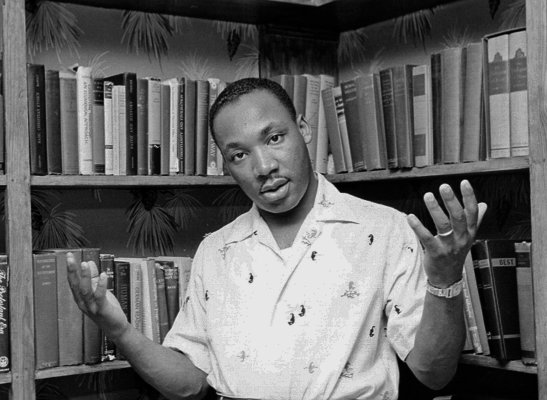 6 Books to Read in Honor of the 50th Anniversary of Martin Luther King Jr.'s Death
Next Up: Editor's Pick