During his six-month campaign for president, Washington Gov. Jay Inslee made climate change a focus of the Democratic presidential primary, forcing it onto the debate stage and pushing other candidates to match his ambitious plans. But Inslee believes that is not enough. Candidates may be talking about climate change, he told me on Aug. 10 over a beer at Waters Edge Bar & Grill in Polk City, Iowa, but none understand what it will take to prevent the potentially catastrophic effects of a warming planet.

To understand what his departure from the race on Wednesday means for climate issues, it’s helpful to hear him talk about why he doesn’t see the elevated climate discussion as a victory. Inslee released hundreds of pages in plans to tackle climate change during his campaign, any portion of which could be adopted by a future Democratic president, but his biggest contribution, something unmatched by any other candidate, was his argument that climate change needs to be the single top priority of the next president. With Inslee out of the race, Democratic presidential candidates will continue to talk about climate change, but they will lose a force that pressed them to make it more than just one issue among many. “This should be the top priority of the United States, I’m the only candidate who’s said that,” he said. “This cannot be just something on a to do list on your refrigerator.”

Inslee has left his mark. Several Democratic candidates have acknowledged Inslee’s role as the campaign’s climate leader on the campaign trail, and all of them were quick to praise his work upon his departure. “Few leaders have done more to shine a light on the climate crisis,” Senator Kamala Harris wrote on Twitter. “His voice will be missed in this primary but I know he will continue this fight.”

But the climate gap between Inslee and the others is easy to see, especially in the sheer depth and breadth of Inslee’s climate plans. The more than 200 pages he released touch on everything from methane leakage to soil health and won near-universal praise from activists and climate policy wonks. Even in the last hours of his campaign, Inslee released a plan for farmers and rural communities. “Inslee’s campaign set the gold standard,” says David Turnbull of Oil Change U.S.

Some candidates, like former Vice President Joe Biden and Vermont Senator Bernie Sanders, have followed, releasing their own plans with bold targets to decarbonize the U.S. economy by the middle of the century. Other top-tier contenders, most notably California Senator Kamala Harris and Massachusetts Senator Elizabeth Warren, have offered more piecemeal climate proposals, calling the issue an existential threat but declining to make it their top priority.

Scientists say that humans have a limited window to stem greenhouse emissions in order to keep temperatures from rising more than 1.5°C by the end of the century; if they don’t, climate scientists have concluded, the warming planet will drive hundreds of millions of people into poverty and destroy the world’s coral reefs, among other dangerous effects.

The U.S. accounts for around 15% of global emissions and has led in the past on the issue. If Washington does not change course in the next administration, the world could easily blow past the 1.5°C target, scientists say.

Some in the Democratic party are skeptical not of the urgency of climate change, but of it’s political power. Activists worry these voices will frame Inslee’s departure as a sign that voters don’t actually care all that much about the issue. But the evidence seems to suggest otherwise. Polls have consistently shown that Democratic primary voters rank climate change as a top concern and candidates are hearing from worried voters in early states who are eager to talk about the issue.

“We still have too many people who are trapped by the past, and aren’t understanding the present,” Inslee told me. “Maybe 10 years ago this was not a first-tier issue in voters minds, but it is now.”

That position stands up on the ground in Iowa. During a five-day trip there earlier this month, voters repeatedly told me that they were eager to evaluate candidates’ positions on climate change even if they would not vote solely on that one issue. At the Iowa State Fair on Aug. 10, Des Moines resident Rachel Wilke-Shapiro thanked Inslee for his work spotlighting climate change even as she donned a Kamala Harris t-shirt.

“He’s keeping that issue at the forefront, that’s good,” she told me. “We’re really all invested in what’s going to happen with climate change.”

Other voters across the state, most of whom were undecided on whom they would support, offered similar perspectives, citing water quality, flooding and other extreme weather as real-life impacts that make them feel the urgency of the issue.

Mary Jane Porter told me on the sidelines of the Wing Ding dinner in Clear Lake, Iowa that climate change was a top priority, pointing to water quality issues in the state among other things, but she nonetheless remained torn on who to support.

When I asked about Inslee, she didn’t skip a beat. “He would be good for the cabinet,” she said.

That would be one way to help ensure climate change remains front and center in Americans’ minds. Still, when I spoke with him on Aug. 10 the governor remained skeptical that his counterparts would make the issue their top priority. “I don’t think other candidates either recognize or are willing to make that commitment.” 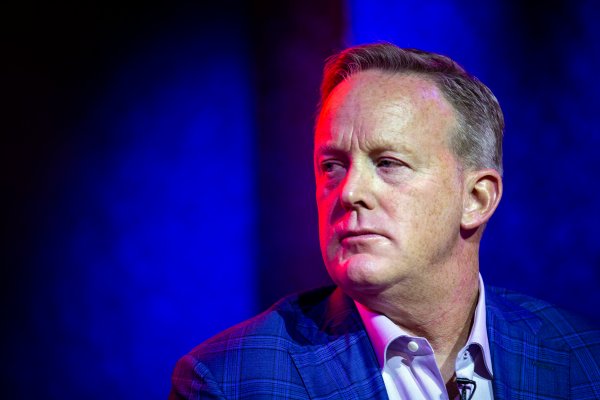 What to Know About Sean Spicer and the Controversy Over His Dancing With the Stars Casting
Next Up: Editor's Pick