The news Thursday that former New York City Mayor Michael Bloomberg may join the crowded field of Democrats chasing their party’s presidential nomination knocked the contest off its axis.

With fewer than 100 days until the first caucus in Iowa, the billionaire technocrat’s decision to enter the race—a choice that has yet to be announced officially—could upend all the current front-runners’ campaign strategies. Bloomberg, 77, a former Republican and the three-term mayor of New York City, has been an outspoken critic of some of the Democratic candidates’ far-left agendas, and wields financial resources no one else in the race can match.

Bloomberg’s likely entry carries the biggest immediate threat for former Vice President Joe Biden, who had carved out a comfortable spot as a middle-of-the-road alternative to the two top liberal contenders, Sens. Elizabeth Warren and Bernie Sanders. South Bend, Ind., Mayor Pete Buttigieg, who had also recently risen in the Iowa polls, would also likely lose some of his moderate supporters to a Bloomberg candidacy.

Others, too, stand to see their campaigns hurt by his addition. The arguments for Sens. Amy Klobuchar and Michael Bennet, and Montana Gov. Steve Bullock, all of whom have appealed to more centrist Democrats, make less sense if Bloomberg joins the race.

The news came out of left field. Just last month, Bloomberg had again sworn off a White House run. But sources say Bloomberg unexpectedly reconsidered and is preparing paperwork to turn in on Friday to qualify for Alabama’s primary, which has the earliest deadlines in the nation. The New York Times first reported the development.

Howard Wolfson, a top adviser to Bloomberg, says the former mayor has not fully committed to running but is uncomfortable with the Democrats’ chances of winning with the existing candidates. “We now need to finish the job and ensure that Trump is defeated—but Mike is increasingly concerned that the current field of candidates is not well-positioned to do that,” Wolfson said in a statement. “If Mike runs, he would offer a new choice to Democrats built on a unique record running America’s biggest city, building a business from scratch and taking on some of America’s toughest challenges as a high-impact philanthropist.”

A Bloomberg campaign would be very well-funded; he is the eighth-richest person in America with a net worth of $52 billion. When promoting the rationale of a Bloomberg candidacy, Wolfson pointed to the more than $100 million that Bloomberg spent to help Democrats in 2018 win back the majority in the U.S. House. Bloomberg’s possible entry into the packed field comes just as his fellow self-funded billionaire Tom Steyer’s star is fading. Steyer has shelled out $47 million during his first three months in the race, and is polling at the bottom of the field.

That said, the former Republican-turned-independent-turned-Democrat may not be welcomed with open arms by an increasingly progressive Democratic base. He may not even qualify for the debate later this month in Atlanta. Democratic National Committee debate criteria require that candidates chalk up 165,000 donors to qualify for the Nov. 20 debate, and the deadline for that benchmark is five days after Alabama’s Friday deadline. Donors aren’t likely to open their checkbooks for Bloomberg, and in the past he has refused to fundraise for his campaigns.

While his billions may make the start of his campaign easier, they also will not help him win over the white, working-class voters that Democrats lost in 2016. In a largely populist moment, many Democrats may consider his extraordinary wealth a liability. (Bloomberg has given away $8 billion over his lifetime, according to Forbes.)

On a practical level, Bloomberg has a great deal of ground to make up. Most of the top political minds have been locked down for more than a year, although the abandoned candidacies of Beto O’Rourke, Kirsten Gillibrand and Eric Swalwell offer some top-flight talent that Bloomberg could snag. It also just takes time to get campaign field operations off the ground and Iowa’s Feb. 3 caucuses are just around the corner. Bloomberg is well-known in New York, but he will have to prove himself in New Hampshire and Iowa.

Would-be rival campaigns were caught off guard by the news of Bloomberg’s possible entry. Many campaigns’ goal of amassing spending parity against rivals in television and digital advertising became quickly unattainable: Bloomberg can outspend them all without breaking stride. Buttigieg, who had more than $23 million socked away at the end of September to buttress future ad buys, can’t compete with Bloomberg’s coffers. 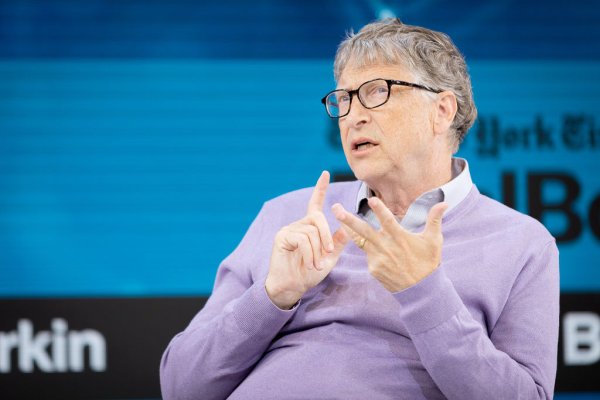 'I'm Not Sure How Open-Minded She Is.' Bill Gates and Elizabeth Warren Spar Over the Wealth Tax
Next Up: Editor's Pick