Tyler Perry the multitasking hitmaker just produced his 800th TV episode and hosted Fox’s The Passion, while his latest Madea movie is due in theaters this fall.
Jason LaVeris—Getty Images
By Daniel D'Addario

Your soap operas on the Oprah Winfrey Network are all hits. What are the differences in outlook between you and Oprah?

The great thing about working with her is that she is very aware of my audience and my ability to speak to my audience. We talked about it early on, and she said, “You do what you do, and I’m completely fine with that.” It’s been great to have a partnership where there is no expectation other than for me to be myself.

In the age of Empire and black-ish, do you have any aspiration to produce a broadcast TV series?

I tried that early on–with Chuck Lorre, right before Two and a Half Men, we were working on a show. When I found out how broadcast worked, I knew that wasn’t a system that I wanted to be in. The stories would not work at all. The vision I have and the way I speak to my audience is very unique. To Oprah’s credit, she understands that.

The two-year break from movie directing before the upcoming Boo! A Madea Halloween was sizable for you. What filled the gap?

Most of that was about my son, and adjusting to being a father. I miss film, and even though this is a Madea movie, after working with [David] Fincher on [Gone Girl], I thought, “Wait a minute, there’s a whole other level here that I need to be paying attention to.” I felt like I went to school. You won’t be able to see it in Boo!, but in the future, you’ll see it.

I think people would be surprised that someone as productive as you took paternity leave.

It was life changing. And everything that I thought mattered didn’t. This little boy has been my healer. He has completely made me stop and see myself. It’s very important for him to not only be a productive, amazing citizen, but also someone who knows the love of his father very well.

You star in the new Teenage Mutant Ninja Turtles sequel. Has having a child changed the projects you do?

That’s exactly why I did it. I want him to see a variety of stuff as he’s growing up.

You’ve fundraised for President Obama. Are you planning to endorse anybody this time around?

At this point, I’m watching very, very closely. When I got behind him, I was so excited about what was going on in politics. I’m completely disgusted by what’s going on now. I’m disgusted by the division and the hatred and the darkness.

In light of the debate over diversity at the Oscars, do you feel as though any of your movies ought to have been nominated?

The Academy should be able to vote the way they want to vote. None of that matters to me. I know there are a lot of people in Hollywood whose work depends on there being changes. But I’ve never been one to knock on the door and say, “Please let me in.” I have always tried to make my own way. I do not think change comes from asking people to let you in. I think change comes by becoming owners of studios, owners of projects, owners of content.

Does putting on The Passion, an elaborate TV spectacular about the life and death of Jesus, contradict Jesus’ own teachings about humility?

This may be presumptuous of me, but I think that if Christ were here in this day and age, to get his message across, rather than traveling for three years from village to village when you can get online, he’d be using all these tools.

What’s a lesson you’ve learned from a project that didn’t connect the way you wanted it to?

I haven’t had anything that has failed. I know that may sound ridiculous, but every one of them was something I was passionate about and felt very good about. If I’m passionate, if I put it out there, and it lives and it breathes and it finds its way, I’ve found success in it. 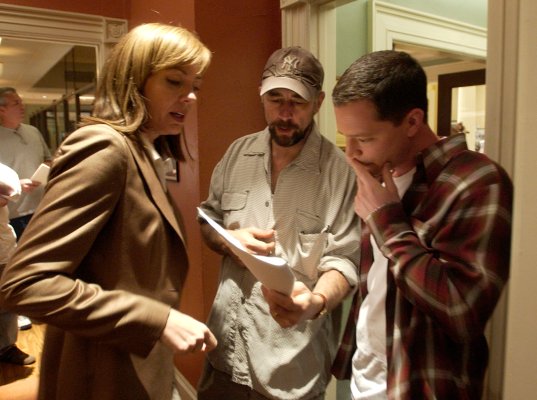 West Wing Fans, Rejoice: The Series Now Has A Podcast
Next Up: Editor's Pick