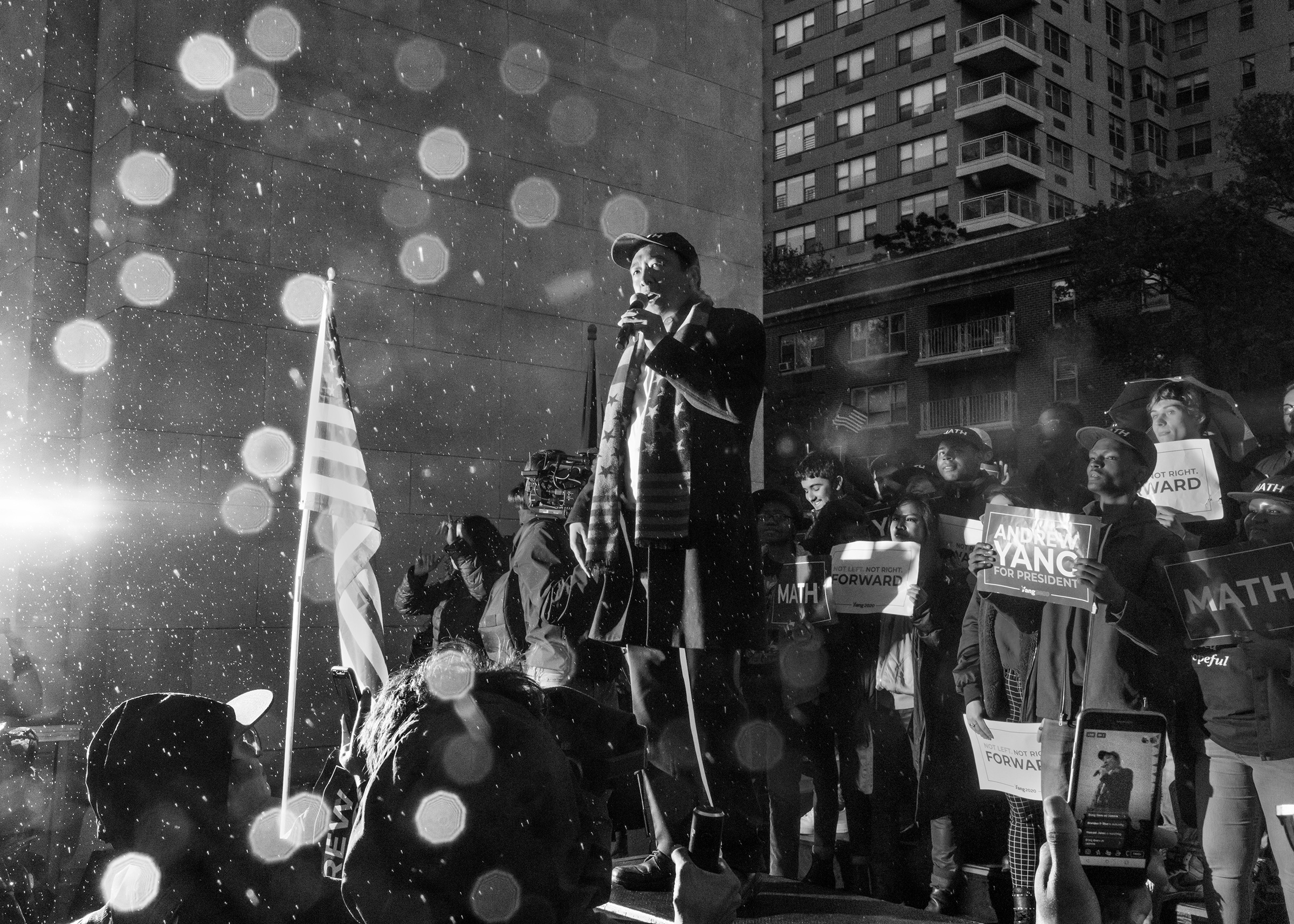 Democratic presidential candidate Andrew Yang speaks to supporters in the rain, at a rally in Washington Square Park, New York, May 14, 2019.
Philip Montgomery for TIME

There’s nothing like an Andrew Yang campaign event. Nowhere else will fans show up wearing hats with MATH written across the top (“Make America Think Harder”). If the mood is right, chants of “PowerPoint” break out, as they did at a recent rally in Seattle. And at the center is Yang, an American-flag patterned scarf tossed loosely around his neck, the personified version of a meme you might’ve seen on Reddit.

Yang is one of the Democratic presidential candidates you’ve probably never heard of. But his long-shot campaign has seen some surprising success. The former entrepreneur is polling better than several more traditionally qualified candidates, he’s amassed a loyal online fan base, and, yes, real-life people show up at his events. Perhaps most importantly, he’s met the qualifications for the first Democratic debate in late June, where he’s hoping to get noticed and become a competitive challenger for the nomination.

Yang has built a loyal army of fans by pitching himself as a change agent. He’s talking about issues that no one else is focusing on, from universal basic income (he’s for it) to circumcision (he’s against it), employing an outside-the-box style that comes across as refreshing to voters who crave an outsider candidate.

Yang is vying to become the first Asian-American nominee of a major party. And while he remains a rounding error in the polls, his modest momentum reflects the enduring hunger for unconventional candidates. If his campaign can catch fire, he’d be further evidence that it’s no longer necessary to spend time serving in elected office or even to be conventionally good at retail politics. What matters, Yang suggests, is to think differently than Washington does. Already his campaign suggests there’s at least some truth to that.

“If we activate a significant number of these people that right now are not conventionally interested in politics,” he says, “then we can contend.”

On a rainy day in May, Yang sat down with TIME in a Portsmouth, N.H., coffee shop. He walked in late because, according to his campaign staff, he wouldn’t “shut up” at his last stop, an editorial board interview with Seacoast Media Group. Yang was wearing his signature American-flag scarf, and he offered me a high-five, which is something he likes to do a lot.

While he likes to tout the contrast he cuts with the President—“the opposite of Donald Trump is an Asian man who likes math,” he says—Yang doesn’t talk much about his identity as the first Asian-American presidential candidate. When I asked about it, Yang said he often has people approach him to say how excited they are about that.

Democratic presidential candidate Andrew Yang at his campaign office in Manhattan, May 14, 2019.
Philip Montgomery for TIME

Yang, 44, was born in New York to two immigrants from Taiwan. He graduated from high school in Exeter, N.H., in 1992, got an undergraduate degree from Brown and went to law school at Columbia, which he graduated from in 1999. His career got off to a tough start: He spent mere months working as a corporate lawyer at Davis Polk and Wardwell in New York before, he says, he quickly became bored with it. Next he launched a failed Internet company called Stargiving, which raised money for charity by auctioning off celebrity experiences. He worked for a mobile software company called Crisp Wireless as vice president of their business and legal department and at a health-care start-up called MMF Systems. Then he ran a tutoring company that was acquired by test-prep giant Kaplan in 2009 for an undisclosed amount. (On the trail, Yang refers to it as a “modest fortune.”)

In 2011, Yang founded an organization called Venture for America. His vision was to train entrepreneurs and dispatch them around the country to help create job growth. He was later named one of the Obama White House’s Champions of Change for that work. Along the way, Yang married and had two kids, including an autistic son.

In a way, Yang credits the latter experience with fueling his campaign for president. “As first-time parents, you don’t know what’s normal versus what’s not normal,” he recalls. ”Is it normal for a three-year-old to freak out when the texture of the ground changes?” It was a growing experience for him. Until then, Yang had suffered only minor adversity. The idea that a single mother would have to care for an autistic child with no resources was heartbreaking, he says, and helped shape his belief in universal basic income—the core of his platform and the idea that’s helped him gain traction.

Yang’s path led him in early 2017 to the Chelsea neighborhood in Manhattan, where he sat down to lunch with Andy Stern, the former president of Service Employees International Union. He’d read Stern’s book, Raising the Floor, which focuses on universal basic income and closes with the idea of someone running for president on the issue. Yang wanted to try it.

Yang set off on his uphill battle as a presidential candidate. He took his first tentative steps toward raising money and spent time thinking about his platform, which today includes dozens of ideas on anything from health care (he’s for Medicare for All), to taxes (he’d like to make Tax Day a federal holiday, complete with celebrations) to financial literacy. If your government teacher ever asked you to invent policy from scratch for a school assignment, the results might look something like his: imaginative, interesting and a little bit out there.

At campaign events, Yang often gestures with his free hand as though he were a claw from the old carnival machine, lowering to pick up a stuffed animal. His speeches focus on the challenges surrounding automation, and he often rails against Amazon, blaming it for local stores closing. “The economy is being transformed faster than ever,” he says. “It has devastated many communities and ways of life. And while we can’t make everyone whole, we can start sharing the bounty of these incredible innovations much more quickly and broadly.”

Supporters gather in the rain at a rally for Democratic presidential candidate Andrew Yang in Washington Square Park, New York, May 14, 2019.
Philip Montgomery for TIME

The first major moment of Yang’s campaign came after his appearance on comedian Joe Rogan’s podcast, where he first introduced himself to a large audience. After that he started gaining traction on Twitter and Reddit, largely for his universal basic income proposal. “I think this policy of a universal basic income, which was, you know, championed by Martin Luther King, Jr., and many others, is one that’s going to help transform the capitalist economy into one that’s more focused on people,” says Edward Levasseur, 24, of Somersworth, N.H.

Yang knows giving people $1,000 a month sounds like a gimmick. But he tells voters it’s an old idea, pointing to Alaska’s Permanent Fund Dividend as an example of how this could work. Internationally, there have been similar attempts: In 2016, Switzerland rejected a referendum on a similar proposal, the first country to hold such a vote. Smaller-scale trials and studies have also periodically popped up to explore the concept. At events, Yang will often ask crowds what they’d spend $1,000 a month on. The audience tosses back a range of answers: Rent. A babysitter. Marijuana.

By the end of the last fundraising quarter, Yang had raised nearly $1.8 million for his campaign. And while he can draw crowds in the thousands, Yang’s base is online. On Twitter, his follower count is more than 282,000, and according to Yang, they’re not all bots, either: His campaign tried to do an inventory, and the results, he said, came up 97% human.

An Andrew Yang supporter at a rally in Washington Square Park, New York, May 14, 2019.
Philip Montgomery for TIME

Even if Yang defies the long odds and became President, it’s not as though Americans will magically start receiving $1,000 checks every month. Democratic congressional aides note that it would be easy for Republicans to attack the idea as welfare and that Congress and the American public have little familiarity with the concept. Democrats would likely be reluctant about the idea of changing existing social-welfare programs, triggering the kind of policy debate that typically requires political know-how to navigate.

But Yang’s whole platform hinges on this idea, and he’s committed to it. He even picked out two families, one in Iowa and one in New Hampshire, to send a monthly $1,000 check to test the policy. That caused a recent hiccup; after The Des Moines Register inquired about the payments, Yang’s campaign said it would amend its finance reports to reflect spending it had previously omitted.

So far, Yang’s campaign has had the most success with younger voters. And it’s not just because of his habit of swearing on the trail. (“F-ck yeah,” Yang responded when I pointed out this penchant.) “I think it’s because young people unfortunately have come of age in an era of institutional failure and erosion,” Yang says, “and so when they sense that someone is speaking in an institutional voice, they kind of tune out.”

That, he theorizes, is why people are drawn to him. Authenticity is something that politicians struggle with, out of fear of getting blasted on cable news for saying the wrong thing, which in turn, he says, leads to conformity. Young people can sense that he isn’t like that.

To win the nomination, Yang will have to convince Democrats that he’s got the best chance at beating Trump. He believes in reaching out to the President’s voters. “Democrats made a grievous error by not having one of their debates on Fox,” he said. “How can you win a general election if half the country isn’t watching your candidates debate?”

Yang’s theory of the case is that once people get to know him through the debates, they will realize his ceiling is “much higher than most other candidates” and begin to coalesce around him. He often says that people tell him he’s what they hoped for when they voted for Trump.

“I am the outsider who has a different sort of message,” he says, between bites at the coffee shop. “And that’s attracting many different people who want a different conversation, a different voice, in Washington.”