The 45th season of Saturday Night Live (SNL) keeps going, following the long-standing late-night comedy shows’ win of a 2019 Emmy for Variety Sketch Series. It’s a starry season as usual, as indicated by the preliminary slate of performers. (See: the return of Eddie Murphy.)

Here’s what else happened so far this season:

First, on Sept. 28, actor Woody Harrelson hosted, accompanied by the debut performance of recent Billboard chart-topper Billie Eilish, the teen pop wunderkind behind When We All Fall Asleep, Where Do We Go? On Oct. 5, host Phoebe Waller-Bridge had her first time on the show (Waller-Bridge has made a splash as the writer and star of cult favorite TV show Fleabag, the mastermind behind Killing Eve and as a writer recruited by Daniel Craig for the upcoming James Bond movie), joined by none other than Taylor Swift, who released her seventh studio album, Lover, in August.

Then, on Oct. 12, actor David Harbour of Stranger Things fame took over hosting duties, with musical guest Camila Cabello. (Her duet with Shawn Mendes, “Señorita,” recently topped charts.) Chance the Rapper did double duty as both host and performer on Oct. 26, for his third time on the show.

Kristen Stewart — who is set to appear in a new Jean Seberg movie as the title character, and starred in the remake of Charlie’s Angels — hosted on Nov. 2, with Coldplay as musical guest. On Nov. 16 there was another double duty appearance, this time by Harry Styles, the former boy band star with a new single (“Lights Up”) and cinematic experience (see: Dunkirk) under his belt.

Before the holiday hiatus, SNL alumnus Will Ferrell took the stage as host for the fifth time, with musical guest King Princess performing on the show for the first time. Her debut studio album, Cheap Queen, came out in October.

The season continued with host Jennifer Lopez on Dec. 7. It’s the Hustlers star’s third time hosting. DaBaby joined the actor and singer in his first SNL performance. On Dec. 14, Scarlett Johansson, recently Oscar-nominated for both Marriage Story and Jojo Rabbit, hosted for the sixth time, accompanied by artist Niall Horan. It was his first time appearing on SNL alone, without One Direction.

To round out the year, Eddie Murphy returned to the SNL stage as an early holiday present on Dec. 21, in a move that reunited him with the show for the first time since 1984, aside from a cameo for the show’s 40th anniversary special in 2015.

The season returned from its winter hiatus on Jan. 25 with host Adam Driver, who recently earned an Oscar nomination for Marriage Story, and Halsey as the musical guest. The following weekend, NFL player J.J. Watt of the Houston Texans hosted with country singer Luke Combs performing as the musical guest.

Comedian Adam Sandler hosted on May 5, with Canadian rock star Shawn Mendes taking the stage as the evening’s musical guest. Sandler was once an SNL writer and cast member starting way back in 1990 — but this will mark the first time he’s hosted the show. He’s currently continuing to put out film projects with Netflix. “In My Blood” singer Mendes, meanwhile, has been on a global stadium tour for his self-titled album, and will be performing on the show for the second time, previous appearing in 2016.

On May 11, beloved British actress Emma Thompson hosted, with none other than the reunited Jonas Brothers performing the evening’s music. Thompson had a big year ahead; her slate was stacked with roles in a Mindy Kaling comedy, the new Men in Black: International, a Christmas romance and an adaptation of the Caitlin Moran book How to Build a Girl. Meanwhile the Jonas Brothers — that’s Nick, Joe and Kevin — recently got the band back together and released chart hit “Sucker,” with more music in the pipeline for the former teen idol group.

Finally, the season closed out with host Paul Rudd on May 18. DJ Khaled, best known for his superstar hip-hop collaborations with artists like Rihanna, Beyoncé and Justin Bieber, finished things off on the music side. Khaled was also releasing his own album, Father of Asahd, on May 17. The timeless Rudd most recently appears onscreen as his character Ant-Man in the Avengers: Endgame blockbuster.

These star-studded lineups followed a blockbuster night when Emma Stone hosted on April 13 — with K-pop supergroup BTS making their Studio 8H debut. Stone, who was recently acclaimed for her turn in The Favourite, is no stranger to to SNL, having hosted three times before. But it was BTS’s first time on this particular stage, having already graced the likes of Ellen DeGeneres and Jimmy Fallon’s shows. Their performance coincided with the release of their new album Map of the Soul: Persona, which came out recently.

Earlier in the season on Saturday Night Live, Game of Thrones star Kit Harington took the reins as host. Jon Snow himself made his SNL debut alongside musical guest Sara Bareilles, known for hits like “Love Song” and “Brave” and the Broadway show Waitress. Harington’s appearance heralds the return of Thrones for its hotly-anticipated final season on HBO, premiering Sunday. In a pre-show appearance on Jimmy Fallon’s show, Harington chatted about his SNL prep and responded to popular Thrones rumors, including the fact that he owns a statue of his character that he has turned into a “kind of shrine.” But although Fallon tried to get a confirmation or denial from Harington on some all-important Thrones theories, the actor managed to maintain the middle ground. We may know Harington now as Snow, who rarely cracks a smile, but his comic timing bodes well for the SNL performance.

Previously this spring, actor Sandra Oh hosted with Tame Impala performing. Oh has had a successful past year; while perhaps best known for her long-running role in TV drama Grey’s Anatomy, she also took an Emmy-winning turn in on the new show Killing Eve and co-hosted the Golden Globes with Andy Samberg. Tame Impala is set to headline Coachella later in the spring.

Before that, actor and part-time DJ Idris Elba hosted with American Teen singer-songwriter Khalid performing. Elba also has a lot coming up: he has a role as the villain in this summer’s Hobbs & Shaw, stars in the upcoming Netflix series Turn Up Charlie and will also appear in the live-action adaptation of Cats with Taylor Swift and Jason Derulo. As for young R&B star Khalid, he’s got a sophomore album set for a spring release this year, following up his hit debut from 2017.

On March 2, people tuned in to see comedian John Mulaney host, with country act Thomas Rhett as musical guest. Mulaney was formerly a writer for SNL, so he knows the drill; he was behind much-loved skits for Bill Hader’s character of Stefon. Since leaving SNL, Mulaney has gone on to star in a popular, Emmy-winning Netflix stand-up special. Rhett’s last album was the Grammy-nominated Life Changes, which came out in 2018.

Earlier in February, actor Don Cheadle hosted, with guitarist and singer Gary Clark Jr. performing as the musical guest for the evening. It was Cheadle’s first time hosting the show; the veteran actor, known for his roles in movies like Hotel Rwanda and Ocean’s Eleven, was promoting a new Showtime show called Black Monday. Clark Jr., meanwhile, is due out in March with a new album following the release of single “This Land” earlier in February.

Cheadle and Clark Jr. followed pop singer Halsey’s take over on Feb. 9; she performed double duty as both host and musical guest. Halsey’s latest single, “Without Me,” topped the Billboard charts the previous week. It wasn’t be her first time on SNL — she performed in both January 2018 and this past fall when Lil Wayne was the main artist — but it was her first time as host. There is a precedent for musical guests taking over the hosting gig, however; stars like Lady Gaga, Taylor Swift and Justin Bieber have blazed that trail. On Twitter, Halsey also confirmed that she’s working on her third album, following 2015 debut Badlands and 2017’s Hopeless Fountain Kingdom.

Halsey came after actor James McAvoy and rapper Meek Mill, who performed for the Jan. 26 episode. McAvoy was promoting Glass, the new M. Night Shyamalan movie that sees the actor reprise his role as a man with an extreme case of multiple-personality disorder, originally seen in Split. Mill, meanwhile, released a Billboard-topping album in the fall.

SNL‘s January return followed a brief holiday hiatus for the show. Back in December, Matt Damon took over SNL hosting duties with Miley Cyrus and Mark Ronson as musical guests. (Cyrus just returned from a musical break since releasing 2017’s Younger Now, working with Ronson on new song “Nothing Breaks Like a Heart,” while producer Ronson is known for collaborating with artists like Bruno Mars, Diplo and Lady Gaga. He just won a Golden Globe with Lady Gaga for their song “Shallow” from A Star Is Born.) Damon already popped up on the show this season, kicking things off in the premiere episode as Justice Brett Kavanaugh.

Momoa’s appearance came a week after the Dec. 1 episode with actor Claire Foy and rapper Anderson .Paak. Foy, the star of the award-winning Netflix show The Crown and the new thriller The Girl in the Spider’s Web, was a newcomer to SNL. So, too, is Grammy nominee .Paak, who just released his album Oxnard in November.

These stars follow Steve Carrell and Ella Mai, who performed on Nov. 17. Carrell is currently starring in Beautiful Boy, where he plays the father to Timothée Chalamet’s troubled, drug-addicted teen. Mai, whose sleeper hit “Boo’d Up” proved to be one of summer’s most veritable bops, recently released her first full studio album, the self-titled Ella Mai, in October.

This season of SNL has produced plenty of conversation and viral moments, from Kanye West’s unusual performance (while dressed in a giant soda bottle costume) to Awkwafina’s historic turn as host; the Crazy Rich Asians comedian is only the second Asian woman to get the hosting gig since Lucy Liu in 2000. Then there was Damon‘s surprise appearance in a cold open sketch rehashing Justice Kavanaugh’s Supreme Court nomination hearings and kicking off the season.

READ MORE: 10 of the Best Saturday Night Live Monologues Ever

Write to Raisa Bruner at raisa.bruner@time.com, Cady Lang at cady.lang@timemagazine.com and Rachel E. Greenspan at rachel.greenspan@time.com. 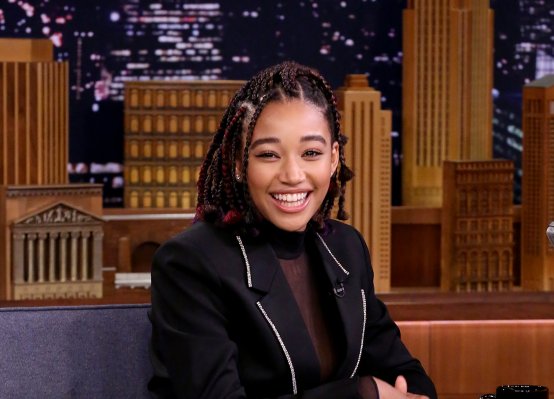