Jojo Rabbit Is a Tender Black Comedy About Dark Times

Even though filmmakers as revered as Charlie Chaplin and Ernst Lubitsch have made movies that lampoon the Nazis and their one-note obsessions, Holocaust humor is still a delicate proposition. Laughter may be one of humankind’s best survival mechanisms, but jokes about Hitler and those who did his bidding aren’t an easy sell–their crimes are too inhumane to allow for laughs.

That’s the turf Taika Waititi steps onto with his incandescently strange and openhearted black comedy Jojo Rabbit. Roman Griffin Davis plays Jojo, a tyke growing up in 1940s Germany who, with his rapturous smile and blond hair combed up into merengue-like tufts, would be adorable except for one thing: at 10, he’s already a Hitler zealot. He loves his country’s leader so much, he appears to have conjured a sort of Hitler hologram: Der Führer (played by Waititi, in a performance poised on the knife-edge of comical exaggeration and unnerving verisimilitude) appears to him privately, in moments of triumph and crisis, giving him tips on improving his “Heil!” and bolstering him after he fails, at the bidding of a couple of older Nazi youth, to kill a sweet, quivering rabbit.

Jojo isn’t so tough after all, and his mother Rosie (Scarlett Johansson, who’s the lustrous soul of the movie) knows it. His Nazi fixation cuts against everything she believes, though she doesn’t dare express that. When the two encounter a group of traitors who’ve been hanged in the town square–we don’t see their faces, but their legs dangle, a lifeless reproach, a few feet off the ground–Jojo asks what these people did to deserve such a fate. Her clipped answer: “What they could.”

It turns out that Rosie is harboring a secret from her son: a teenage girl, Elsa (Thomasin McKenzie), is living in a hidden space in the family’s house. Jojo stumbles into Elsa’s warren-like quarters by accident, and his initial horror over his discovery–as a Jew, she’s everything he has been conditioned to hate–eventually gives way to more complicated, and more tender, feelings.

None of that, admittedly, makes Jojo Rabbit sound very funny. It’s Waititi’s ability to balance unassailably goofy moments with an acknowledgment of real-life horrors that makes the movie exceptional. (He adapted the screenplay from a novel, Caging Skies, by Christine Leunens.) Waititi establishes the tone–a vibe that will eventually take a hairpin twist–in the opening credits, setting the German version of the Beatles’ “I Want to Hold Your Hand” against vintage footage of Führer-mad Germans cheering and saluting their idol.

The sequence is cheekily obvious. It’s also exhilarating, a suitable opening into the world of extremes Waititi is about to show us, in vivid, highly stylized colors: even Hitler’s eyes are an exaggerated, trustworthy blue. Many of the jokes, too, are delightfully obvious: a group of Gestapo officers is so large that once they’ve Heil Hitler!–ed everyone in their immediate vicinity, the words swirl into nonsense soup, like a round-robin homage to Mel Brooks.

Jojo Rabbit isn’t subtle, yet it’s still somehow delicate–more of a piece with Waititi’s earlier films, like the prickly-sweet 2016 coming-of-age comedy Hunt for the Wilderpeople, than with his booming 2017 Marvel hit, Thor: Ragnarok. Jojo Rabbit‘s ad campaign calls the movie “an antihate satire,” which perhaps doesn’t do it any favors. Being anti-hate is almost as vague as being pro-rainbow: Who doesn’t like rainbows?

But then, nearly every other news story these days addresses some problem that has sprung from hatred of “the other,” whoever that other might be. Evil can recycle itself, wearing a different disguise each time it appears. Jojo Rabbit is an entreaty to stay vigilant, and to live up to the ultimate epitaph: They did what they could. 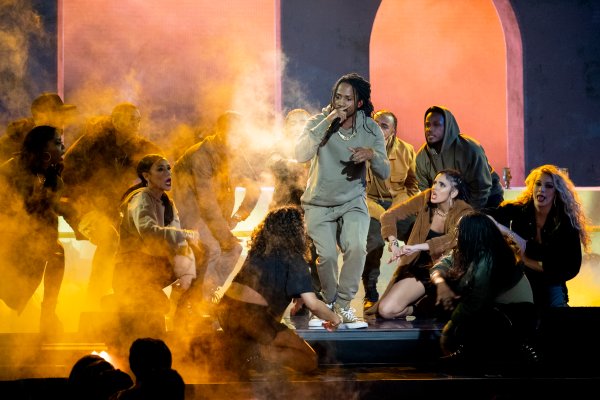 Get to Know D Smoke, the Winner of Netflix's 'Rhythm and Flow'
Next Up: Editor's Pick