Justin Timberlake, RuPaul and 16 Other Celebrities With Books Out This Fall

With midterm elections only a few months away, it’s no surprise that prominent political figures are speaking out by publishing tell-alls this fall, with books coming from the likes of Michelle Obama, Bernie Sanders, Steve Scalise and Julian Castro in the next couple months. But just because November is around the corner, it doesn’t mean that fall memoirs are completely dominated by politics — several entertainers are opening up about their lives, too. Musicians, actors, comedians and more are sharing stories of setbacks and their journeys to success, whatever their definition may be. From Broad City’s Abbi Jacobson to iconic singer-songwriter Tina Turner, here are 18 celebrity memoirs, essay collections and reflections coming this fall.

In Pieces by Sally Field (out now)

Sally Field got her big break in 1965 and hasn’t slowed down since. Her memoir details her experiences playing several characters — Norma Rae, Mary Todd Lincoln and more — but delves deeper when she examines herself. Field is vulnerable with readers as she reflects on her life, exploring a childhood of trauma and the loneliness that propelled her into the spotlight.

The Greatest Love Story Ever Told: An Oral History by Nick Offerman and Megan Mullally (10/2)

When Nick Offerman and Megan Mullally met, he was sleeping on a friend’s couch — and she was about to win her first Emmy for Will and Grace. Eighteen years later, they have recorded an oral history of their irreverent love story, interspersed with essays and photographs, including pictures of the puzzles they’ve completed together.

Before Leonard Cohen died in 2016, he knew he wanted to publish a book that would offer an inside look into his creative process. The famed poet and musician had enough time to do just that, collecting his private notebooks, lyrics and drawings to serve as his final farewell.

Always Look on the Bright Side of Life: A Sortabiography by Eric Idle (10/2)

With his usual humor, one of the founding members of Monty Python reflects on his eccentric path to comedy stardom. Eric Idle includes behind-the-scenes stories about the Pythons and anecdotes about friends and acquaintances across industries, from Steve Martin to the Queen.

Buy now: Always Look on the Bright Side of Life: A Sortabiography

Lessons: My Path to a Meaningful Life by Gisele Bündchen (10/2)

The supermodel, who grew up in Brazil, has appeared in countless fashion shows, ad campaigns and magazines. Gisele Bündchen’s memoir reveals her penchant for privacy (in spite of her more than 14 million Instagram followers) and the moments she’s kept out of the public eye, including crippling panic attacks that led her to consider suicide.

Buy now: Lessons: My Path to a Meaningful Life

The Office and Unbreakable Kimmy Schmidt star delivers a series of essays on topics ranging from growing up in St. Louis obsessed with squirrels to becoming a mother and learning how to discreetly change diapers.

In her second essay collection, the 2 Dope Queens co-host wants readers to know that they are going to make it. From the horrors of dating to hiding debt from her parents, Phoebe Robinson is determined to laugh in the face of adversity. Robinson’s book is not only her trademark brand of hilarious, but also a strong commentary on feminism and intersectionality.

She Wants It: Desire, Power, and Toppling the Patriarchy by Jill Soloway (10/16)

Jill Soloway’s memoir is all about transformation, as it should be: Soloway had a parent come out as transgender, created the Emmy-award winning show Transparent and identifies as nonbinary. Soloway’s perspective on sexuality and family is both candid and timely and urges readers to question society’s view of gender and define it for themselves.

Buy now: She Wants It: Desire, Power, and Toppling the Patriarchy

The rock and roll icon sets out to empower readers with her story of growing up as a young girl in Nutbush, Tenn., and eventually becoming one of the world’s best-selling artists. The eight-time Grammy Award winner steps off the stage to share her complicated and inspiring personal history.

Busy Philipps shares her navigation through the acting industry much like she’s talking to a friend: she wants you to feel the pain of being asked to lose weight for a role and the anger when she’s undervalued as a creative contributor. The Dawson’s Creek alum provides a refreshing take on rejection and how it always hurts, even if you’re a television star, and opens up about an alleged sexual assault when she was 14 years old.

Buy now: This Will Only Hurt a Little

Millions of people know RuPaul Charles as the star of RuPaul’s Drag Race, which brought drag into the sphere of mainstream entertainment. In GuRu, RuPaul goes into the stories behind his Emmy-Award winning show and lengthy career, laying out his model for success — which is applicable to more than just show business.

The former professional basketball player is ready to impart his insider knowledge on exactly how he dissects the game. Kobe Bryant’s philosophy on the sport, accompanied by 20 years worth of pictures from notable basketball photographer Andrew D. Bernstein, is told through stories of passion, injury and triumph.

Buy now: The Mamba Mentality: How I Play

Blowing the Bloody Doors Off: And Other Lessons in Life by Michael Caine (10/23)

With a career spanning over five decades, Michael Caine has much more to share than just explaining the ending of Inception, as he finally did after more than eight years of debate. Having played every kind of part, both big and small, Caine shares all the wisdom he’s gained along the way.

Buy now: Blowing the Bloody Doors Off: And Other Lessons in Life

In Justin Timberlake’s first book, the singer-songwriter goes back to his childhood, exploring when and where his love for music began. His early passion drove him to eventual success, first as a member of NSYNC and then as a solo artist, which he discusses through stories about his writing process, performing and the anxieties that come with it all.

Buy now: Hindsight & All the Things I Can’t See in Front of Me

Adam “ADROCK” Horovitz and Michael “Mike D” Diamond — who will soon embark on a six-date book tour — document their band’s path to punk rock popularity, all the while honoring the legacy of the trio’s late third member, Adam “MCA” Yauch. With contributions from Amy Poehler, Spike Jonze and more, the Beastie Boys Book covers everything from the band’s members teenage years to their reflections on activism and being able to reinvent themselves.

I Might Regret This: Essays, Drawings, Vulnerabilities, and Other Stuff by Abbi Jacobson (10/30)

The co-creator and co-star of Broad City decided that she needed some space, so she drove across the country by herself and took readers along for the ride. While asking many questions about adulthood — like what the impact of tucking in her shirt has had on her life — Abbi Jacobson infuses her sharp and witty voice to tell stories about loss, love and finding yourself.

Buy now: I Might Regret This: Essays, Drawings, Vulnerabilities, and Other Stuff

The co-founder of the Red Hot Chili Peppers has crafted a turbulent coming-of-age narrative, describing a tumultuous childhood spent moving across the country. Flea explains his intense love for music, inspired by his stepfather, and how it drove him to start his own band. He demonstrates the importance of following your dreams, even in tough circumstances.

Buy now: Acid for the Children

Jackie Chan has starred in more than 200 films in over 50 years of working in the movie industry. The actor now reflects on his life by telling his origin story, beginning in Hong Kong and making his way to Hollywood. Chan has always aimed to own up to his faults, whether he misses a line or messes up a stunt, and in Never Grow Up he continues to show why it’s so key to learn from your mistakes. 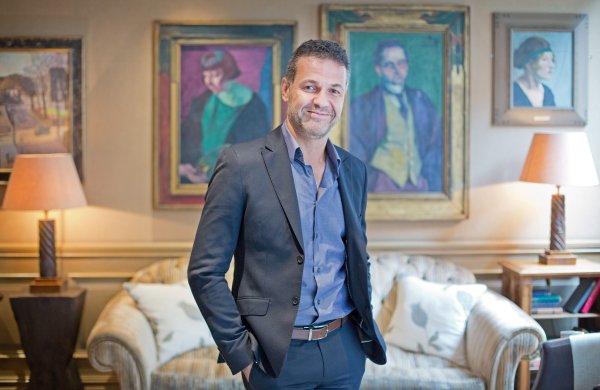