Camila Cabello Shines in Her Solo Act on Camila

Cabello started out in the vocal quintet Fifth Harmony, formed on the reality show The X Factor
Kevin Mazur—Getty Images
By Sam Lansky

Last year was grim for women in pop: high-profile releases from Katy Perry and Miley Cyrus under-performed, while the unshakable Taylor Swift was the sole female pop vocalist to top the singles chart all year. Mostly, moody white guys like Ed Sheeran and Post Malone and newly minted hip-hop renegades like Migos and Cardi B—the only woman besides Swift to hold down the No. 1 spot in 2017, with her track “Bodak Yellow”— dominated airwaves. But in the No. 2 spot for several weeks last
fall was a new voice: Camila Cabello, a Mexican-Cuban singer-songwriter raised in Miami who ascended to fame as one part of the girl group Fifth Harmony before departing to forge a solo career, with “Havana,” a sweet-and-sour ode to her hometown. Like 2017’s biggest hit, Luis Fonsi and Daddy Yankee’s inescapable “Despacito,” Cabello’s song smartly capitalized on the Latin-pop boomlet. “Despacito” was already a hit, but a remix featuring Justin Bieber made it a bona fide smash; likewise, once “Havana” was a hit, Cabello tapped reggaeton king Daddy Yankee for a remix to buoy the song’s popularity on the charts.

On her debut solo album, Camila, out Jan. 12, Cabello proves she has the chops to stand alone in the spotlight. Airy, pretty ballads like the wearied “Real Friends” and heartfelt “Consequences” showcase her vocals, and there are a few radio-friendly bangers too, like the tropical- hued “She Loves Control” and “Inside Out,” which is lightly playful as a samba. But it’s a surprisingly muted set, suggesting that the anthemic female pop that characterized the Obama years may be a thing of the past. In an era in which xenophobia reigns, Cabello’s multiculturalism is its own form of stealthy resistance. 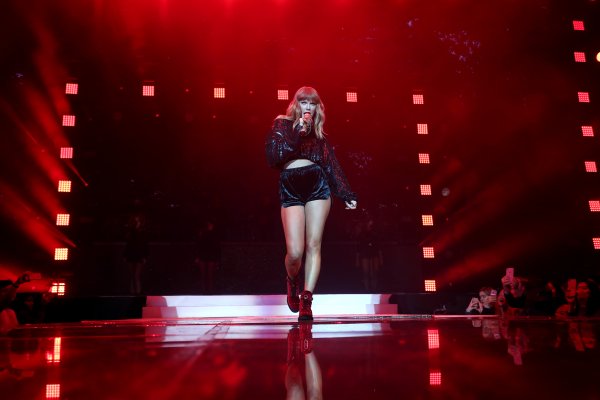 Taylor Swift's Teaser for Her New "End Game" Video Is Here
Next Up: Editor's Pick