Movies that should be fun but aren’t can feel like a punishment from the gods. The idea of Kristen Stewart, one of our most vibrant and surprising actresses, starring in a remake of a silly but fun movie adapted from a silly but fun TV show—what’s not to love, or even just semi-like, about that?

But the new Charlie’s Angels, written and directed by Elizabeth Banks (working from a story by Evan Spiliotopoulos and David Auburn), is a shaggy, listless action movie that’s too messy to be fun: It spends so much time advertising how glitzy and sparkly it thinks it is that it comes to resemble a migraine aura. Stewart doesn’t so much star in the film as elbow her way into it sideways: She plays Sabina Wilson, one of dozens of ass-kicking women spies who work for an invisible entity named Charlie. They get their orders from handlers, all of whom go by the name of Bosley: Banks herself plays Sabina’s Bosley; she also supervises a lanky, seemingly humorless operative named Jane Kano (Ella Balinska). A newcomer, brilliant, MIT-trained engineer Elena Houghlin (Naomi Scott), joins the group: She has to learn the ropes! She makes mistakes! Ha ha, isn’t that funny?

Jane works for a company that has developed an alternative energy source that, it turns out, can be easily weaponized. It must not fall into the wrong hands—but of course, it does, and this trio of angels, a subgroup of the larger organization, must retrieve it. Meanwhile, Patrick Stewart, as a recently retired Bosley with too much time on his hands, gets into some trouble: He’s a pleasing, purring presence whenever he’s on-screen, which isn’t often enough.

There’s plenty of globe-trotting in Charlie’s Angels. The three women, plus their Bosley, traipse to locales including Rio, Berlin and Istanbul, but none of these intrinsically fascinating places are made to look particularly dazzling, or even like good spots for a two-hour layover. The action sequences are so badly shot and edited that it’s nearly impossible to follow who’s moving where, and why. The women’s spy clothes are, in general, risibly ugly, consisting largely of the kind of tiny, tight “going-out” dresses you’re likely to see if you follow all the wrong Instagram influencers.

The exception, maybe, is the outfit of yellow-and-hot-pink jockey silks Kristen Stewart gets to wear in a race-track scene. But even Stewart, slinking through the movie with a shrug and a wink, just looks more bored than anything. Charlie’s Angels is the second movie directed by Banks. (The first was the moderately enjoyable 2015 Pitch Perfect 2.) As a performer, Banks has always been a lively, intelligent presence with a great streak of nuttiness, but her spirit seems to have barely rubbed off on this movie. Charlie’s Angels should have been glamorous fun, a Saturday-night-out kind of movie. Suddenly, staying in with an icepack on your head never looked so good. 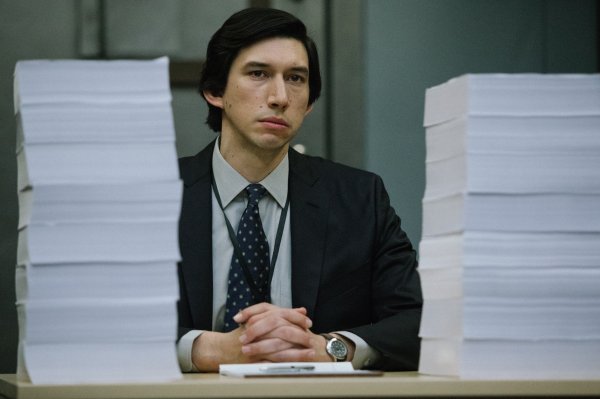 The True Story Behind the Movie The Report
Next Up: Editor's Pick